This story is part of a series about people, products and discoveries that changed the world.

During a recent meeting at Canadian Space Agency headquarters in Longueuil, Que., Ken Podwalski put up a picture that he wanted his entire team to take a moment to absorb.

It was Dextre, the built-in-Canada space robot that perches on the end of Canadarm2 and is featured on the back of the Canadian five-dollar bill. The snapshot Mr. Podwalski was so taken with captured Dextre last December, in the midst of upgrading the power system on the International Space Station. With a battery in each hand and one on the side, Dextre could hardly have looked more busy or more capable – a space-age equivalent of Rosie the Riveter.

"Look at what we do now," Mr. Podwalski said, who is the Canadian program manager for the space station. "This is all-out robotics."

Great Canadian Innovations: How Canadians at Whistler invented the future of skiing

Mr. Podwalski joined the agency more than 20 years ago, when engineers were dreaming up how a robotic system to service the space station would work. Back then, no one yet foresaw just how much work there would be for it to do. As with the first generation of Canadarms that flew on the space shuttle, the key to the system's success would prove to be its ability to take on new roles as the needs and priorities of the space program changed.

Canadarm began when Spar Aerospace, a Toronto company spun off from de Havilland Aircraft, was looking for new business just as NASA was looking to involve Canada in its fledgling shuttle program. NASA was already interested in DSMA Atcon, another Toronto firm, which built robots for loading fuel into CANDU nuclear reactors. Spar had got its start building extendable antennas for satellites. Soon, the two companies were teaming up on a proposal to build the space shuttle's remote manipulator system – an astronaut-operated device that would be used to deploy satellites from the shuttle's cargo bay.

With encouragement from the National Research Council, the federal government got on board with the plan. U.S. aerospace companies were less enthusiastic, hoping instead for a made-in-the-United-States arm. But in July, 1975, the deal was struck. Canada would provide an arm for the shuttle with Spar as prime contractor. For Spar, the project was a reach in more ways than one: A failure on such a high-profile venture might take down the company.

"Their specialty was electromechanical systems that work in a very hostile environment," Mr. Podwalski said. But from that starting point, Spar engineers had a long way to go to develop an arm that would do what NASA needed.

Among the most inspired innovations they came up in the early days was the "end effector," essentially the hand that allows the arm to capture objects in space. Foregoing more complex and finicky options such as a claw or mechanical gripper, engineer Frank Mee devised a system of three cables that narrowed like the iris of a camera to snare its target. When the idea first came to him, he built a model at home using cardboard and string to persuade his colleagues at Spar that it would work.

Other key developments included the arm's gearbox, which provided fluid movement while minimizing "backlash" – an engineering term for sloppiness or play between motors and joints.

Bob Ferguson, an engineer who once worked on Formula One race cars, developed the gearbox.

In February, 1981, the first arm was officially accepted by NASA at a ceremony at Spar. It was then that NRC president Larkin Kerwin dubbed it the "Canadarm." But the real branding coup would come with the arm's maiden flight that November. As the shuttle orbited with its cargo-bay doors open, its camera showed the arm, elbow bent, against the swirling white-and-blue backdrop of planet Earth, with the Canada logo – a late-stage addition – proudly emblazoned on the arm's white thermal blanket.

What mattered most was that the arm worked beautifully, and not just for satellites, but as a camera on a stick that could be pointed at anything the shuttle mission controllers wanted to see. On one occasion in 1984, it proved to be just the thing to knock a worrisome chunk of ice off the side of the space shuttle Discovery. The successes led NASA to order a Canadarm for every shuttle in its fleet.

Mike Hiltz, an engineer who began working at Spar as a co-op student in the 1980s, still recalls the thrill of working with the system and adapting it to meet new challenges, such as when it served as a platform for astronauts repairing the Hubble Space Telescope in 1993, or when it mated the first two elements of the International Space Station, a Russian module with a U.S. node, in 1998.

"We never stopped improving and evolving," Mr. Hiltz said, now manager of systems engineering at MacDonald, Dettwiler and Associates Ltd., which acquired the space division of Spar in 2001.

In his view, the most impressive task the arm was asked to perform was one that never played out in real life: serving as a bridge between two space shuttles in the event that NASA had to mount a rescue mission in orbit.

"We did all the simulations to prove you could do this," he said. "Imagine a flexible, 1,000-pound arm holding two 250,000-pound vehicles with astronauts scrambling up and down it."

Building Canadarm 2 and Dextre for the space station required several more technical leaps, including a vision system, a way to sense how much force can be safely applied during delicate work, and an arm that can detach at either end and walk around the outside of the station to get to wherever it is needed. The arm also blurs the boundary between Earth and space in a way the public rarely perceives. While the media focus is generally on the astronauts who live and work on the station, as often as not the arm today is handled by one of nine Canadian operators who sit in Houston or in CSA's control centre in Longueuil.

Meanwhile, control systems and technologies developed for Canadarm have since found their way into numerous other applications, including robotic-assisted brain surgeries.

But as the United States and other countries begin to think about what comes after the space station, whether it's the moon's surface, the nearby asteroids or a mission to Mars, it's hard to imagine that there won't be a need for a system like Canadarm – should Canada choose to fill it.

For now, there's no firm plan for the future of Canada's biggest claim to fame in space. But Mr. Podwalski allows that this hasn't stopped engineers from thinking about the possibilities.

For three decades, Canadarm was the versatile workhorse of the space shuttle program, ideal for handling large payloads, for reaching around to look at the underside of the shuttle and for serving as a platform for space walkers. A key feature in the original design was the “end effector,” which made it possible for the arm to firmly grasp anything that was outfitted with a standard metal grapple fixture. The innovative design allowed an astronaut to direct the arm close enough to its target to snare it without sending it tumbling.

First, the end effector approaches the grapple with its three snare cables forming an open triangle to give the arm’s operator a reasonable margin to work with. Once the end of the grapple fixture is within the triangle, the cables are rotated to close around it.

Next, the inner part of the end effector retracts, pulling the grapple fixture tight to make a solid connection. On Canadarm2, the end effector includes connections for power and data lines so that the arm is able to detach at either end.

How Canadians at Whistler invented the future of skiing
January 29, 2017 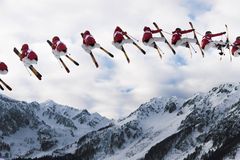 How a Canadian engineer fuelled the battery industry
January 2, 2017
How the discovery of stem cells revolutionized medicine
January 15, 2017
Follow Ivan Semeniuk on Twitter @ivansemeniuk
Report an error Editorial code of conduct
Due to technical reasons, we have temporarily removed commenting from our articles. We hope to have this fixed soon. Thank you for your patience. If you are looking to give feedback on our new site, please send it along to feedback@globeandmail.com. If you want to write a letter to the editor, please forward to letters@globeandmail.com.
Comments