The public health world is gearing up, once again, for a final push to eradicate polio and, with only five cases recorded in the world so far this year, that elusive goal seems tantalizingly within reach.

On Monday, representatives of charitable groups and governments gathered at the Rotary convention in Atlanta and pledged an additional $1.2-billion (U.S.) over three years to fund the Global Polio Eradication Initiative, which aims to eradicate the childhood disease by 2020. That is just shy of the $500-million needed annually for the global vaccination program.

The biggest contributor is the Bill and Melinda Gates Foundation, which pledged $450-million; Rotary International, the service club that has made ridding the world of polio its mission, will contribute $150-million, Nigeria $140-million, Pakistan (via the Islamic Development Bank) $100-million, Canada $75-million, and a host of other donors. (All figures in U.S. dollars.)

Paul Martin: Time to finish the job of eradicating polio

"Polio is very difficult disease, but with the generosity of donors we'll have the resources to get this done," Bill Gates said in an interview.

He said that the polio eradication campaign "suffered a lot of setbacks in the early 2000s but we really upped our game so I'm optimistic."

Bob Scott, a Rotarian and head of the Polio Eradication Task Force, said the pledges are crucial because "they show the world we're still fully committed to this effort."

He said he is encouraged by the fact that, after 29 years, there is still no donor fatigue but, rather, a renewed sense of purpose. Rotary Club members are not only formidable fundraisers – having raised $1.4-billion and counting for the polio campaign – they are the backbone of an army of vaccination volunteers.

Both Mr. Gates and Mr. Scott praised Canada as one of the most steadfast supporters of the campaign, having donated more than $600-million since 2000.

Marie-Claude Bibeau, the Minister of International Development and La Francophonie, said while polio was eliminated in Canada decades ago, "diseases know no borders and we're committed to seeing this through to the end."

Ms. Bibeau said the "investments in polio do more than combat polio, they reinforce health systems and allow countries to be better prepared for new threats like Ebola."

In 1988, there were more than 350,000 polio cases in more than 125 polio endemic countries. In 2016, there were only 37 cases and three endemic countries: Afghanistan, Pakistan and Nigeria. India, long the epicentre of polio, was declared polio-free in 2011, a milestone that reinvigorated the eradication campaign.

Polio mainly affects children under the age of five and can cause irreversible paralysis. Among those paralyzed, 5 to 10 per cent die when their muscles become immobilized.

Mr. Gates, the co-founder of Microsoft who has committed much of his fortune and his personal time to global health issues, said polio, like most infectious diseases, thrives where there is unrest, so nothing can be taken for granted. But he said the notion of abandoning the eradication quest was unthinkable at this point.

He said the big change in recent years is that "we've gotten a lot better at looking for polio and preventing cases." For example, in Pakistan, there is now regular monitoring of sewage effluent and, when polio viruses show up, there is a redoubling of vaccination efforts.

The biggest impediment to vaccination is attacks on vaccinators by the Taliban in Pakistan and Afghanistan, and by Boko Haram in Nigeria.

Margaret Chan, director-general of the World Health Organization, said eradicating polio "will be a perpetual gift to coming generations," because it will allow public health resources to be shifted elsewhere. 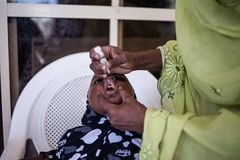 15 children die in botched South Sudan vaccine campaign
June 2, 2017
Follow André Picard on Twitter @picardonhealth
Report an error Editorial code of conduct
Due to technical reasons, we have temporarily removed commenting from our articles. We hope to have this fixed soon. Thank you for your patience. If you are looking to give feedback on our new site, please send it along to feedback@globeandmail.com. If you want to write a letter to the editor, please forward to letters@globeandmail.com.
Comments