Canada placed third from the bottom in a major new study of health care in 11 affluent nations, a score that reflects this country's poor performance on measures such as infant mortality, access to after-hours medical care and the affordability of dental visits and prescription drugs.

Canada's ninth-place finish is a slight improvement over 2014, when the Commonwealth Fund, a New York-based private research foundation, put Canada in 10th place, ahead of only the United States.

In the group's new report, released Friday, Canada pulled ahead of France, but stayed well behind such standouts as the United Kingdom, Australia and the Netherlands, which ranked first, second and third.

The United States remained in the basement of the rankings.

"The domains that put Canada in ninth place are really access, equity and health-care outcomes," said Eric Schneider, senior vice-president for policy and research at the Commonwealth Fund. "On those domains of quality, [Canada] is fairly similar to the U.S."

The Commonwealth Fund is one of the few organizations that tries to systematically grade and compare the health-care systems in high-income countries.

Although crafted for an American audience, the group's reports are often cited by Canadian politicians and policy makers looking to see how this country stacks up against its peers, especially when it comes to the bang Canada gets for its health-care bucks.

As the report notes, Canada spent the equivalent of 10 per cent of its gross domestic product on health care in 2014 – the most recent year for which figures were available – more than higher-ranked United Kingdom, New Zealand, Norway and Australia.

The United States, meantime, doled out the equivalent of 16.6 per cent of GDP for the shoddiest results among the 11 countries.

Drawing on its own international surveys and data from groups such as the World Health Organization (WHO) and the Organization for Economic Co-operation and Development (OECD), the Commonwealth Fund's new report grades the 11 countries on 72 metrics grouped into five categories: Care process, access, administrative efficiency, equity and health-care outcomes.

But the results make more sense when you delve into the survey questions and data undergirding the report, said Raisa Deber, a professor at the Institute of Health Policy, Management and Evaluation at the University of Toronto.

"One of the things that was striking to me was their equity measure," she said. "The equity measure was focusing a lot on things that are not part of medicare. Do you skip dental care? Do you not fill prescriptions? Well, the government doesn't pay for those. So, yes, we do a lot worse than we should."

When it comes to administrative efficiency, the report's grades are based on Commonwealth Fund surveys that included questions about how much time patients and doctors spend fighting insurance companies – generally not much of a problem in the single-payer parts of Canada's health-care system.

The access category, on which Canada placed second to last, was split into two subcategories: Affordability and timeliness. Although Canadians do not have to pay out of pocket for the care they receive from physicians and at hospitals, Canada scored poorly on affordability because of its lack of universal coverage for dental care and drugs.

On timeliness, Canada was hurt by long waits to see specialists, undergo elective surgery and receive care in the emergency room, among other measures.

Canada also performed poorly relative to its peers on health outcomes. Canada's infant-mortality rate of 4.8 deaths for every 1,000 live births was second only to the United States. Sixteen per cent of Canadians reported having at least two of five common chronic conditions, again, second only to the United States at 21 per cent. However, Canada ranked near the top of the pack for five-year survival rates for colon and breast cancer.

As Dr. Deber pointed out, on some of the indicators, the difference between the best and worst performers was vanishingly small.

Dr. Schneider, the lead author of the report, said the comparisons are most useful as a means to learn what the best health-care systems get right, no matter how they're structured and financed.

"One of the striking things in this report," he said, "is that Australia, the Netherlands and the U.K. all use very different financing mechanisms and yet they're able to achieve top performance." 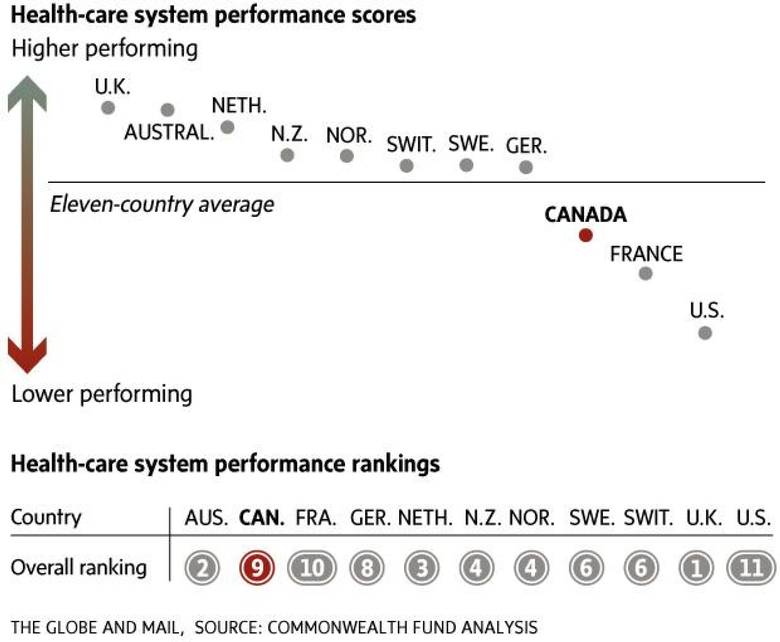 Report calls for faster ER responses after dying man languished for hours
July 5, 2017
Ontario clinicians raise concerns over assisted-dying co-ordination service
July 5, 2017
Provinces struggling to provide proper care for seniors: report
July 11, 2017
Follow Kelly Grant on Twitter @kellygrant1
Report an error Editorial code of conduct
Due to technical reasons, we have temporarily removed commenting from our articles. We hope to have this fixed soon. Thank you for your patience. If you are looking to give feedback on our new site, please send it along to feedback@globeandmail.com. If you want to write a letter to the editor, please forward to letters@globeandmail.com.
Comments