The new Liberal government is counting on the 264,030 taxpayers who make up Canada's top 1 per cent to help fund billions in campaign promises, but policy experts say taxing the rich raises complex issues.

A new report from Statistics Canada released on the eve of Wednesday's swearing-in of the Liberal cabinet provides a detailed look at the country's top 1 per cent.

The small group is a big source of federal revenue, contributing more than 20 per cent of all income tax collected. Canada's rich may be getting a little richer, but their income growth of 1.2 per cent between 2012 and 2013 was in line with the growth of all other tax filers.

Borrowing from rhetoric used south of the border by U.S. President Barack Obama, Liberal Leader Justin Trudeau won power on Oct. 19 by arguing Canada's middle class aren't getting ahead. He appeared in campaign ads walking the wrong way up an escalator to illustrate the point. Liberal MP Chrystia Freeland, a former journalist who co-chaired Mr. Trudeau's economic team and is expected to land a senior role in cabinet, is the author of a book called Plutocrats: The Rise of the New Global Super-Rich and the Fall of Everyone Else, a title that underscores the party's thinking on the issue.

Yet, the academic debate over income inequality is far from black and white. There are questions over its causes, the best way to measure inequality and discussions over what, if anything, governments should be doing in response.

The Liberal platform promised to raise taxes on the top 1 per cent and also pledged to ensure high-income earners are not using the small-business tax deduction as a way of avoiding taxes. The party also plans to eliminate income splitting for families with children under 18, arguing that it primarily benefits high-income Canadians.

Former Statscan assistant chief statistician Michael Wolfson, who is a professor at the University of Ottawa, has produced research showing the top 1 per cent actually earn more than it appears when income from their small businesses is taken into account. Prof. Wolfson said doctors and dentists are among the most common types of small business and he suggests the new government should take a closer look at how these and other professionals are using the small-business tax break to split income among family members. He estimates tighter rules could raise about $500-million in tax revenue.

"There remains no question in my mind that there's a substantial amount of tax avoidance associated with the small-business deduction," he said, describing it as "a dark corner of the tax act" that hasn't received a great deal of parliamentary scrutiny over the years.

Tuesday's report from Statistics Canada provides the latest information as to who makes up that 1 per cent.

The income cutoff for entry into the 1-per-cent club is now $222,000 nationally, which is above the $200,000 marker set by the Liberal Party in its election platform. The party promised a new tax bracket of 33 per cent on income earned above $200,000. Currently, the top tax bracket of 29 per cent kicks in at $138,586. The Liberals say the new tax on Canada's richest income earners will raise $3-billion a year and that the money will offset the revenue cost of a tax break on income earned between $44,701 and $89,401, which would be taxed at 20.5 per cent rather than the current 22 per cent.

There are signs this could create problems at the political level. New Brunswick Finance Minister Roger Melanson recently told The Globe and Mail that his government may have to reconsider its own tax on the rich – launched this year – in light of the federal Liberal plans.

The proposed new federal rate would push the top combined federal and provincial tax rate in New Brunswick to 58.75 per cent on income earned above $250,000. New Brunswick currently has the highest top tax rate in the country.

Mr. Trudeau was heavily criticized during the election campaign by the Conservatives and NDP for saying that "a large percentage of small businesses" are ways for the wealthy to reduce their tax bill.

The Liberal platform promised to lower the small-business tax rate while ensuring it "is not used to reduce personal income tax obligations for high-income earners." The platform did not explain how this would be accomplished.

"That is where I expect they will go, but it's not easy," he said. "It's going to be intricate and detailed."

Prof. Veall said the increases in inequality largely occurred in the 1980s and 1990s with relatively little change since then.

While Canadians appear to be genuinely concerned about the issue, he suspects those feelings are driven by a sense that their own employment is precarious.

"There are people out there who are reasonably okay with their current incomes and their current standard of living but feel that it is all in jeopardy and that they could lose it very quickly in today's economy," he said. "I think that's where much of the concern comes from."

Opinion
There is no middle in the middle-class debate
June 8, 2015

Middle-class tax cut would be first order of business for Liberal government
October 9, 2015 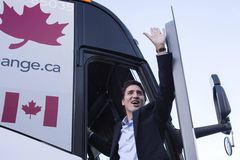