What do Vancouver's oldest vaudeville theatre, a landmark Toronto hotel built in 1888, and government-owned hangars that made planes for the Second World War all have in common?

They are all buildings with a historical past that have been either torn down or left to fall apart and be replaced with new developments.

The Heritage Canada Foundation calls the demolition of Vancouver's Pantages theatre and Toronto's former Empress hotel, which burned down in January, "Canada's worst losses of 2011."

The century-old Pantages theatre, with its ornate interior and scenic canvas paintings, was torn down last April and plans are to replace it with a high-rise condo development.

The Empress, an elegant red-brick building built in 1888, was slated for demolition; after a local heritage group stepped in to try saving it, an arsonist burned it down.

A frustrated spokesperson for the national heritage foundation says it's time the federal government stepped in with legislation to at least protect designated historical buildings in Canada.

Carolyn Quinn points out that federal buildings — especially those on land belonging to Crown corporations — have no real safeguards against the wrecker's ball.

"Canada is really the only G8 country without laws to protect historic places owned by its national government," said Ms. Quinn, whose foundation is privately run.

A government agency, the Federal Heritage Buildings Review Office, can designate heritage buildings, but she says it doesn't have any teeth, lacking statutory protection and maintenance standards.

FHBRO was created in 1982 and, according to its website, its primary objective is to assist federal government departments in their protection of heritage buildings.

But that doesn't apply to Crown corporations, which are exempt.

Ms. Quinn points out that because Canada Post is a Crown corporation, it is under no obligation to preserve any of its post offices. The same applies to engineering works like bridges and structures in ports, which are run by Crown agencies.

As for heritage train stations, she says a loophole in federal legislation allows "demolition-by-neglect" — with an absence of policies or budgets to take care of them. Quinn says there's a similar problem with the Winnipeg airport terminal, built in 1964.

And if a federal building is transferred to a Crown corporation it loses its heritage designation entirely.

An official with Parks Canada confirmed that's what happened in 1996 when hangars that belonged to the Department of National Defence were transferred to the Crown after Canadian Forces Base Downsview closed just outside Toronto.

One hangar is currently home to the Canadian Air and Space Museum, but it's being evicted by Downsview Park Inc., a Crown corporation. The museum is being replaced with a four-rink ice complex; only the building's facade will remain.

Built in 1929, the hangar building housed the operations of the de Havilland Aircraft company which produced planes for the Allies in their fight against Hitler.

Federal officials say the skating-rink operator estimates the new venue will attract 750,000 people per year — more than a dozen times more visitors than the museum received.

Lloyd Alter, the past president of the Architectural Conservancy of Ontario, admits it's tough to try to save industrial heritage buildings like hangars.

He was unsuccessful in attempts to protect two other Downsview vintage hangars where Mosquito airplanes were built for the Second World War. They were demolished.

Mr. Alter is not optimistic about efforts to save the home of the air and space museum: "It's hard for me to get worked up and excited because you just can't fight the feds," the 58-year-old architect said.

Inquiries about the future of the Toronto museum were referred to Public Works Minister Rona Ambrose, who is responsible for Crown corporations. In an emailed reply, the minister's office pointed to remarks made by Ms. Ambrose in the Commons in late September.

At the time, Ms. Ambrose said Downsview Park was a Crown corporation at arm's length from the government and that it was a business decision.

She also said the heritage minister directed officials to see if Ottawa's federal Canada Aviation and Space Museum could work with the private Toronto museum to accommodate some of its "historical treasures."

But there has been no indication that the government might be interested in preserving the historic hangar.

Mr. Alter, who is also a real estate developer, says at least one province —Ontario — has tougher legislation in place for heritage buildings.

"There are rules to protect it and you theoretically have to preserve the building," he said.

Michael Chan, the province's minister of tourism and culture, points to the Ontario Heritage Act, which was toughened in 2005. He said its rules have helped protect more than 15,000 private structures.

If there are plans to demolish a building, the act requires a series of reviews that involve the community through the local heritage association, as well as the municipal planning board and city council.

But Mother Nature can sometimes speed up the process. Mr. Alter said that's what happened in Goderich, Ont., this past summer.

"A number of designated buildings were hit by a tornado ... and we made a big case to fix them, but (the town) said: 'No, we don't want to fix them, it costs too much money.'

"And they just issued demolition permits and away they went."

Mr. Chan said he wasn't aware of what happened in Goderich. He said occasional challenges are inevitable, "but I would say most of them come to an amiable solution."

As for Toronto's Canadian Air and Space Museum, the provincial minister says Ontario can't do anything because the property is on federal Crown land.

"Basically we, Ontario, do not have any jurisdiction in terms of authority to intervene," he said. "I think they're big enough to make those decisions." 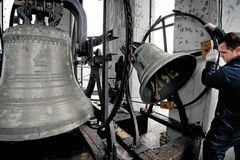 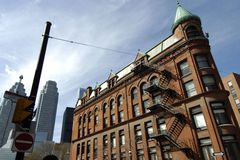