At a time when most government agencies are cutting and slashing, a little-known spy agency led by a Rhodes Scholar is the envy of Ottawa for its planned billion-dollar headquarters.

A rising force in the national-security apparatus, the Communications Security Establishment Canada (CSEC) is an electronic-eavesdropping agency that gathers intelligence from abroad. Led by 68-year-old military veteran John Adams, the agency keeps its operations quiet, reporting only to Canada's military and civilian leadership.

For the first time since he took over the agency in 2005, Mr. Adams has discussed CSEC's mission and future, which includes plans for an $880-million headquarters housing hundreds of mathematicians, engineers and computer scientists by 2015.

News of the planned 72,000 square-metre compound is raising eyebrows around the national capital, given few people outside of government know what CSEC is or what it does.

But "if you were to ask the Canadian Forces if there is anyone that has saved Canadian lives in Afghanistan, they would point to us," Mr. Adams told The Globe and Mail. He said that well over half of the "actionable intelligence" that soldiers use in Afghanistan comes from his agency.

This work is distinct from that done by a far better known spy agency -the Canadian Security Intelligence Service.

The difference between the two boils down to tradecraft and jurisdiction.

CSIS - Canada's human-intelligence, or "HumInt" agency - has its people and agents train their actual eyes and ears on security threats inside the country.

CSEC - the "signals-intelligence" or "SigInt" counterpart - relies almost wholly on technology to hear what people are saying abroad (spying on Canadians is illegal). Since being formed in the 1940s, this agency has rarely told anyone the fruits of its findings, save for its two masters - the Department of National Defence and the Privy Council Office.

On paper, the two agencies' mandates don't overlap, but in practise their operations are running together more than ever. That's why the new CSEC complex is being built next to CSIS' current headquarters - and why architects are planning to install a glass bridge connecting the two.

As envisioned, the seven-building CSEC complex will be the equivalent of a 90-storey skyscraper turned on its side - a highly secure compound outfitted with the latest high-tech gear. Two nearby electrical generating stations will power the agency's computers, which suck in millions of conversations from around the world each day and scour them for intelligence information.

CSEC's 1,700 staff and $300-million budget are double what they were a decade ago. Yet the agency's bricks-and-mortar surroundings have been neglected. Some staff complain that a wall-sized mainframe computer has even fallen through an old floor. The current complex, a scattering of Cold War-era buildings near Carleton University, can no longer suck enough energy off the grid to sustain operations.

"We've run out of power," said Mr. Adams, whose facilities use about as much energy as a small town. "We've got 700 people buried in a basement."

Now the plan is to bring staff out of their subterranean cloisters and into collaborative work spaces, ones where cryptologists and engineers work together in bright rooms surrounded by daylight and foliage.

The plan doesn't just envision $880-million in construction costs. According to a union representing CSEC employees, there is also a somewhat unique arrangement that will commit Ottawa to spend up to $5-billion more over the next 34 years. These costs are part of a "public-private partnership" - incorporating a complex mix of debt-servicing costs, standard-operating payments and an unusual facilities-management deal with a private consortium.

Still in the final stages of negotiation, the project will demand significant resources at a time when CSEC's parent organization - the Defence Department - hopes to slash thousands of jobs and a billion dollars from its budget. As a result, the secretive SigInt agency is finding itself under the unfamiliar glare of public scrutiny. "They put themselves in a goldfish bowl, building a building with that much, in these times," said John MacLennan, who heads the Union of National Defence Employees.

But Canadians need to understand how much raw data the spy agency handles - and how much more it's going to have to handle in the future, Mr. Adams argues. He makes a case that the new complex in Ottawa's East End is vital for national security.

Already, he said his staff process the informational equivalent of a WikiLeaks-sized data dump of State Department cables every day - or more transactions than all of Canada's big banks combined. His staff burn through megawatts of brainpower and electrical energy as their computers crunch unfathomable amounts of information.

Nothing is final, but the new headquarters is envisioned as a veritable puzzle palace for Canadian cryptographers. Part of the inspiration comes from high-tech companies, who have found that good things happen when staff are forced to work together - and when they play as hard as they work.

A technocrat who has battled public-sector unions in the past, Mr. Adams has swayed Defence Minister Peter MacKay to sign off on allowing a consortium of companies to build and manage the new headquarters. The Australian-based Plenary Group won a competitive bidding process and is to absorb the cost of construction, upkeep and basic facilities management while the federal government "buys" the property over 34 years - much like the way a condominium owner pays off a long-term mortgage and monthly maintenance fees.

A political operator who can make his points with a wink, Mr. Adams travelled an interesting road to get to the spy world. In the 1960s, he graduated from the Royal Military College of Canada before studying arts at Oxford. He joined the military and rose to the rank of major-general before heading to Ottawa. The federal government has trusted him with running army bases, military procurement and the Coast Guard before handing him the reins of CSEC.

Canada has never tried the particular type of public-private building arrangement slated for CSEC's headquarters. "This is fairly new, but GCHQ has done it," Mr. Adams said, referencing the British counterpart agency, Government Communications Headquarters. There were complaints about cost overruns at that facility, but the CSEC chief said his headquarters should save Canadian taxpayers almost $180-million over the coming decades if everything goes to plan.

Much of the cost is being driven by mechanical engineering - secure closed networks have to be built; rows upon rows of computers and servers and cooling systems have to be installed; and the backup electrical generators need to be in place in case the public grid goes down. Conceptions of the building also call for a "rapid response" meeting room, in the event that terrorists strike.

Yet critics are seizing on seemingly superfluous trims. There are plans for a sprawling "glass curtain" wall incorporating an artist's concept for an "encryption code pattern." Many sports and leisure facilities are planned.

Officials at CSEC say nothing is final and are already dialling down some of the more lavish touches contemplated in the mockups. "There will be no [hockey]rink and there will be no hobby garden," says Mr. Adams, who admits he's a fitness nut.

Keeping Canada in the loop

Officials say Canada's signals-intelligence capability gives us extra sets of ears abroad, since the very existence of CSEC gives Ottawa access to the tens of billions of secrets dredged up by larger partner agencies, including the U.K. Government Communications Headquarters and the U.S. National Security Agency.

Since the end of the Second World War, Canada has been part of an intelligence arrangement where a loose consortium of spy agencies from English-speaking countries freely trade their state secrets.

Spymasters argue that Canadian taxpayers' $300-million-a-year commitment to CSEC is a bargain.

And Canadian prime ministers can get jittery if someone threatens to turn off the intelligence tap, as shown in correspondence that surfaced in the recent WikiLeaks data dump. Paul Martin is said to have lobbied U.S. president George W. Bush to keep Ottawa in the intelligence loop, amid fears Canada would be cut off for refusing to send soldiers to join the U.S.-led invasion of Iraq.

Ottawa "is aware that we are creating a separate U.S.-U.K.-Australia channel for sharing sensitive intelligence, including information that traditionally has been U.S. eyes only," reads a 2004 U.S. State Department briefing to Mr. Bush.

Canada "has expressed concern at multiple levels that their exclusion from a traditional 'four-eyes' construct is 'punishment' for Canada's non-participation in Iraq and they fear that the Iraq-related channel may evolve into a more permanent 'three-eyes' only structure."

A threat to national security? Some CSEC staff argue contracting out jobs leaves Canada at risk

One of the more alarming criticisms about the new signals-intelligence complex is that it's a threat to our national security.

Part of the plan involves contracting out about 90 government jobs to the private-sector consortium that will manage the new buildings over the next 34 years. These contractors will do the less sensitive work - such as laying cables around the building, running an information-technology help desk or working as security guards. They will not be cryptographers or signals spies.

Even so, the plan has incensed some CSEC staff who argue that top secrets are at risk, given that a rotating cast of contractors will be less loyal than sworn-to-secrecy federal employees.

"I have to go to my grave with my secrets, but there's a real possibility these people will WikiLeak real secrets," said one retired CSEC employee, who asked not to be named because he said he feared "retribution."

In an interview, CSEC chief John Adams dismissed the concern about privatization, saying any outside contractors would be vetted for appropriate security clearances. Signals-intelligence agencies in Britain and the United States have used large numbers of private-sector contractors without problems, he said, adding that CSEC already contracts out some jobs. 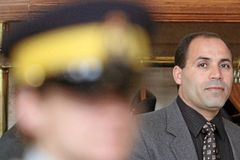 With national security, the buck doesn’t stop
December 7, 2010
Leak about CSIS deemed embarrassing, but innocuous
November 30, 2010
Follow Colin Freeze on Twitter @colinfreeze
Report an error Editorial code of conduct
Due to technical reasons, we have temporarily removed commenting from our articles. We hope to have this fixed soon. Thank you for your patience. If you are looking to give feedback on our new site, please send it along to feedback@globeandmail.com. If you want to write a letter to the editor, please forward to letters@globeandmail.com.
Comments