A man who recently travelled to Sierra Leone walked into a southern Ontario hospital last week, feeling unwell. Four minutes later, he was in quarantine and being tested for the Ebola virus. Those tests proved negative.

Suppose they'd been positive. What would happen next?

It would start with a technician at the National Microbiology Laboratory in Winnipeg, where the testing takes place, who would notify Dr. Gary Kobinger, the lab's chief of special pathogens, of the results.

Kobinger would double-check the sample. Once satisfied it was indeed positive, he would advise Steven Guercio, acting head of the laboratory.

Finally, Taylor and Outhwaite would notify federal Health Minister Rona Ambrose that Canada had its first confirmed case of Ebola.

"We've had results in the middle of the night before now. Mercifully, they've been negative results, but we get them."

Those phone calls would set off a chain of events shaped by Canada's past experiences with infectious-disease outbreaks: SARS in 2003 and the swine-flu pandemic of 2009.

The Public Health Agency of Canada has two teams of public health experts and epidemiologists on standby in case a patient tests positive for Ebola — one in Winnipeg and another in Ottawa.

Since Ottawa is closer to Belleville, that team would race to the hospital. They'd bring laboratory expertise to quickly confirm the diagnosis, and any needed supplies, such as masks, gloves and face shields.

They'd be responsible for the hands-on treatment of the patient, who would remain in quarantine.

After that, the agency would send out daily updates, much like it did in 2009.

The plan reflects preparations that have been underway for some time.

Last week, Ontario designated 10 hospitals across the province as referral centres to treat potential cases of Ebola because they already have sophisticated infection-control systems in place.

On Sunday, the federal government announced it had started a joint exercise with Nova Scotia public health officials to ensure Canada is ready in the event of its first case of the disease.

One of Ottawa's Ebola rapid response teams deployed to Halifax to practise working with provincial and local public health officials.

The Sunday drill followed a smaller one that took place on Friday in Ottawa to test the teams' ability to quickly assemble the proper gear and equip one of the four dedicated Transport Canada aircraft currently on standby in the capital and Winnipeg.

Behind the scenes, Ambrose has been busy. She held a conference call last week with her provincial and territorial counterparts to ensure they are fully prepared to deal with the disease should it make an appearance in Canada.

The minister has also met with representatives of the national nurses' union, which has complained of inadequate personal protective gear, training and preparedness for nurses, who would be on the front lines.

Ambrose said she reassured the nurses that they have her full support and that the government is committed to ensuring they have everything they need to feel safe.

Meanwhile, in addition to $35 million already pledged to the World Health Organization, the UN and humanitarian aid groups working in the affected region, Ambrose announced another $30 million Friday for the containment effort. Canada has also donated up to $2.5 million worth of personal protective equipment.

PHAC has also sent two mobile labs to Sierra Leone. One of the lab teams is working with Medecins Sans Frontieres to provide rapid diagnosis; the other is helping to improve infection prevention and control procedures.

Those teams check in every day with officials in Canada to update them on the situation on the ground.

Canada has also offered to donate a Canadian-developed experimental vaccine, currently undergoing clinical trials, to the WHO. 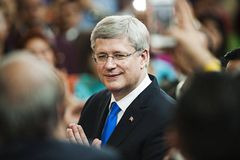 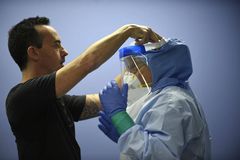 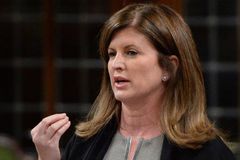