Canada is preparing to embark on a far-reaching program of financial surveillance of senior public officeholders, from Prime Minister Stephen Harper, Governor-General David Johnston and Supreme Court Chief Justice Beverley McLachlin down to thousands of elected politicians and senior bureaucrats.

Many who will be affected by the program are unaware of what is coming. One who is aware, retired Supreme Court justice Louise Arbour, is stunned by its reach to her children.

In a little-known law that Parliament has already passed, these officeholders are known as "politically exposed persons" and deemed at risk of being involved in corruption, money laundering and the financing of terrorism. Financial institutions, from banks and insurance companies to investment dealers and real estate brokers, will be required to keep special tabs on them. And not only them, but on their children, other family members and "close associates."

The law, part of a Conservative budget omnibus bill last year, has not taken effect yet. It awaits cabinet approval of regulations that will set out its precise scope.

Those regulations propose a vast reach: For 20 years after the politically exposed persons (PEPs) leave office, the financial institutions will need to keep their eyes on them, their family and associates. The financial institutions' first job is to identify the PEPs; then to assess their risk; and then, if the institutions determine the PEPs are a high risk – there is little public explanation on how the banks are expected to do this – they will need to monitor the PEPs' account activity. The institutions will need to report suspicious activity (anything they suspect is connected to terrorism or money laundering) to a federal intelligence agency known as Fintrac, which investigates and can turn over files to the Mounties or the Canada Revenue Agency.

The law also reaches back 20 years to former senior office holders, such as prime ministers Paul Martin and Jean Chrétien, their children, relatives and associates. (Mr. Martin said through an aide that he has never heard of the law.)

The law is raising questions about how to protect against corruption in the political offices of the nation without making unwarranted or arbitrary incursions on former office-holders' privacy and the privacy of their children, spouses and associates. Just last month, a judge sentenced Lise Thibault, a former Quebec lieutenant-governor, to 18 months in prison for fraud and breach of trust. Separately, Quebec's Charbonneau Commission revealed corruption in the province's construction industry, affecting high-level politicians and senior bureaucrats. And the Senate has been roiled by allegations of financial misdeeds, with one member, Mike Duffy, currently on trial. (The new PEP law covers the Senate and members of federal and provincial legislatures. It also covers mayors.)

"I think corruption is growing by leaps and bounds," Garry Clement, a former national director of the RCMP's proceeds of crime program, said in an interview. "It's far greater than people are willing to accept."

The law also raises questions about the financial costs, which some say will be in the millions of dollars, perhaps tens of millions, each year that will be borne by each large financial institution, and ultimately by the consumers.

Some question how effective the law will be. Canada has had a similar law in place since 2008 covering foreign PEPs – senior officeholders who work on behalf of foreign countries, or merely in them, such as ambassadors – and a Senate report two years ago found that no foreign PEP had been caught laundering money because of the provisions, according to Matthew McGuire, a member of an anti-money laundering advisory committee to the federal finance department.

"It's a wide net that catches very few fish," Mr. McGuire said in an interview, of the law that will cover domestic PEPs. He said 31,000 financial entities in Canada will have monitoring responsibilities under the law.

In 2012, the Financial Action Task Force, to which Canada belongs, required its members to include domestic PEPs in their anti-money-laundering rules.

The law also raises questions about governance. The measures were contained in Bill C-31, formally known by the title "An Act to implement certain provisions of the budget tabled in Parliament on February 11, 2014 and other measures." The 359-page bill's lengthy summary mentions amendments to the Proceeds of Crime (Money Laundering) and Terrorist Financing Act, but says nothing about PEPs. There was not a single mention of PEPs in House of Commons debates on the budget bill, a Globe and Mail review found. There were just two brief mentions at meetings of the finance committee. It also passed unnoticed by Canadian newspapers.

The little-known 2008 law on foreign PEPs has also come as an unpleasant surprise to some of those it has affected. Ontario sisters Catherine and Emilie Taman both said in interviews they received mysterious phone calls from their separate banks, asking intrusive questions. (Emilie Taman is running for the New Democratic Party in an Ottawa riding in the federal election.) Catherine's banker eventually explained why: Her mother was a foreign PEP. The Taman sisters' mother is Ms. Arbour, who apart from being a retired Supreme Court judge is also a former international war-crimes prosecutor and a former United Nations human rights commissioner. Catherine said when she refused to answer the questions (on her mother's advice), her account was frozen, which she discovered when she tried to use her bank card in a restaurant. A letter she provided to The Globe showed her bank asking questions such as, "From whom/where are you getting money?" "How did you accumulate your wealth/net worth?"

How the banks knew the Taman sisters were Ms. Arbour's daughters was a mystery to all three women, but experts contacted by The Globe say a small group of private companies provide lists of foreign PEPs and their families, and banks run new customers through those computerized lists, for a fee. There are similar lists for domestic PEPs.

In a commentary published in Thursday's Globe, Ms. Arbour calls the program a "useless bureaucratic nightmare," and says that her children should be left alone by their bankers.

Others, however, say it is an important tool in fighting corruption in high places. The banks are circumspect about the new requirements. The Royal Bank of Canada referred questions to the Canadian Bankers Association. That association said, in a written reply to The Globe's questions, "Generally, banks will determine if a client is a politically exposed domestic person (PEDP) or a family member of a PEDP, assess the risk of the individual and monitor their account as appropriate. Each bank would have its own policies and procedures and would assess the risks based on each individual situation."

Michelle Alexander, a spokeswoman for the Investment Industry Association of Canada, said her group has asked the government to reduce the law's reach to five years forward and back, from 20. It has also asked for clarification of the term "close associate."

"I used to work with Joe Oliver. He was my boss many years ago. Am I a close associate?"

Opinion
My children and I are caught in a useless bureaucratic nightmare
October 15, 2015 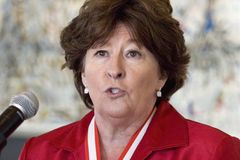