The association released a report Wednesday that listed the top 20 traffic bottlenecks in Canada, with major freeways such as Toronto's Highway 401 and Montreal's Highway 40 making up the worst stretches of road in the country.

A 15-kilometre stretch of the 401, for example, adds an average of 36 minutes to a 60-minute commute, leading to 3.2 million hours of delays every year.

Photos: See the visual history of the Gardiner through The Globe and Mail archives, beginning with its construction

But the report paints a different picture of traffic gridlock in the Vancouver region, with the worst spots in the city concentrated on urban routes through busy commercial areas.

The worst offender in Vancouver is a section of Granville Street on the southern edge of the city, which was ninth on the list, while a section of Georgia Street in the downtown core was the 10th-worst.

Andy Yan, a Simon Fraser University professor who specializes in urban planning and development, said the report actually shows an accomplishment of regional transportation planning in City of Vancouver.

"Compared to other cities, Vancouver has done a good job on locating people close to work," he said. "That's why we only get small sections [of the roads that] have congestion."

The CAA identified the worst bottlenecks by analyzing provincial and municipal traffic-volume numbers along with GPS data over nearly 3,000 kilometres of roads across the country.

A total of four sections of road in the Vancouver area made the list. They also included another section of Granville Street, south of downtown near Broadway, and the Massey Tunnel, which connects Richmond and Delta below the Fraser River.

Toronto dominated the rankings, taking up half of the 20 top spots, followed by Montreal, which had five.

"It may be a matter of pouring concrete and asphalt in some cases, but there are a lot of other solutions as well," he said.

"What we are trying to do here, with the report, is identifying the problem and how to reduce the traffic jams we do have in those locations most efficiently, with technology and innovations."

"They are comparing highways [in other cities] to urban streets in Vancouver," he said.

Mr. Toderian argued the key to addressing traffic congestion is road pricing, such as tolls or congestion charges, as well as the provision of different modes of transportation, such as public transit, and routes for walking and bicycling.

As for the Massey Tunnel, which has long been a headache for commuters in the Vancouver region, the mayor of Delta, B.C., held up the CAA report as more proof it should be replaced with a $3.5-billion bridge currently planned by the provincial government.

"It's a matter of regional provincial traffic connection," Mayor Lois Jackson said. "As a result of the increase of the population, we have larger commercial area and we need to accommodate the community. And we need the bridge to do this."

The B.C. government plans to replace the tunnel with a bridge funded through tolls. The project has been controversial, in part because of its potential impact on the surrounding environment but also because critics argue the government should not be encouraging more cars to be on the region's roads.

Ms. Jackson said there is limited public transit within her city, which means many residents have no other choice but to drive their cars to work.

"If people have the choice here, they will take the bus," she said.

From no traffic to no lights, how self-driving cars will physically change our cities
November 3, 2016 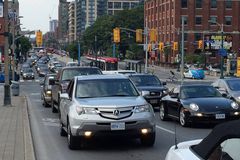 Toronto city council endorses highway tolls, still needs provincial approval
December 14, 2016
Vancouver’s cycling-friendly side streets seen as a key step forward for North American cities
January 2, 2017
Follow us on Twitter @globeandmail Opens in a new window
Report an error Editorial code of conduct
Due to technical reasons, we have temporarily removed commenting from our articles. We hope to have this fixed soon. Thank you for your patience. If you are looking to give feedback on our new site, please send it along to feedback@globeandmail.com. If you want to write a letter to the editor, please forward to letters@globeandmail.com.
Comments