Arthur Edmondson Rossell hadn't returned to Dieppe since the day he barely survived the ill-fated 1942 raid that would become a Canadian military catastrophe.

So severely injured was Mr. Rossell in that Second World War battle for the French coastal town, then heavily fortified by the Germans, that he spent 18 days in a coma and many more months in hospital care.

But the 92-year-old would tell you a sense of survivor's guilt took a a greater toll -- a feeling that had prevented him from taking part in anniversary commemorations, until this year.

The Brampton, Ont., resident was among a contingent of more than 20 Canadian and British veterans of the Dieppe raid who were welcomed back as heroes on Sunday during sombre 70th anniversary commemorations. After the official ceremony at Canada Memorial Square, attended by more than 4,000 who stood in the fog above the pebbled beaches where so many young Canadians died, Mr. Rossell said he was surprised by the spectacle. Beneath those imposing cliffs, the veterans, in their 90s, many in wheelchairs, paraded by the once blood-drenched beach while onlookers lined the esplanade to applaud. Canadian flags adorned most buildings and flag poles in the summer resort community. A Spitfire flew overhead.

"With so many years, I would have thought that people would have forgotten about it and we'd just be getting around an ordinary town," Mr. Rossell said. "I've got to be honest. I was overwhelmed with everything and everybody."

The Canadians were ordered to attack the Nazis in a a mission codenamed, optimistically, Operation Jubilee. Of the 4,963 Canadians involved, only 2,210 returned to England after the Dieppe raid, according to Veterans Affairs Canada. Another 1,946 were taken prisoner and 913 were killed. Two years later, the Allies liberated Dieppe.

Dieppe survivor, Charles Russell (Russ) Burrows, who was born in the United States but raised in Ontario, was taken prisoner after the raid and held until the end of the Second World War. The 90-year-old from Picton, Ont., visited Dieppe 20 years ago, and while it was still unbearably sad to return, the gratitude has only grown.

"I have never ever seen more people appreciate what we did," he said. "They were lined up a mile."

Mr. Rossell echoed that sentiment. He said he was glad he made the pilgrimage.

"It was an incredible experience," he said. "It's one that I'll never forget for the rest of my days."

Canadian historian David O'Keefe, who spent 15 years poring through 100,000 pages of documents to expose what he believes was the real motive behind the doomed raid, was with the veterans.

In a new documentary, Dieppe Uncovered, airing Sunday and Monday on History Television, and forthcoming book titled Dieppe Decoded, he argues that the mission was designed solely to provide cover for 15 to 20 ultra-secret commandos. That unit, pulled together specifically for Dieppe, had their eye on Hotel Moderne, where they hoped to snatch documents, books, even the infamous Enigma machine -- anything that would help crack the Germans' revamped coding system.

On Saturday, at a theatre just 75 metres from Hotel Moderne, Mr. O'Keefe aired his documentary for 300 people, including Dieppe veterans.

"Very emotional and collectively cathartic is the only way to describe it," Mr. O'Keefe said of the ceremony.

"It was a profound honour to have been here with them and to have shared the findings of the research with them through the documentary," he said. "I dare say there was a determination and purpose in their demeanor as they marched by to take rightful bows. I will never forget this moment."

Steven Blaney, Canada's Minister of Veterans Affairs, said he was left speechless, overwhelmed by his first trip to Dieppe.

"Not only did the veterans not die in vain, they were not forgotten. They are part of the city's past present and future," he said.

Mr. Blaney said the new insights revealed in the documentary changed entirely what we have long believed about the raid.

"This mission had a clear objective," Mr. Blaney said. "This is helping all Canadians to get a better understanding of Dieppe and is making even more meaningful the sacrifice."

Mr. Rossell counts himself lucky. He was charged that day to act as bodyguard for a Brigadier-General, but when his commander was wounded soon after hitting the water, troops scurried him back to the landing craft. Mr. Rossell grabbed a rope, was pulled out to sea and eventually, to safety.

Whatever the rationale behind the raid, it won't change his perspective about what happened on Aug. 19, 1942.

"I don't think it was worth it," he said. "Not for the manpower that was lost." 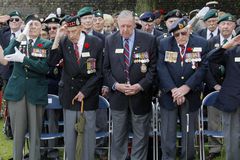 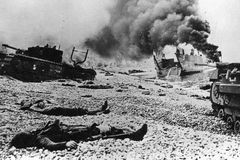 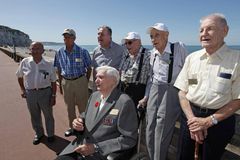 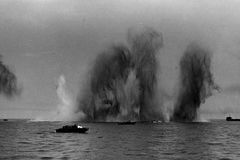 Does your family have a connection to Dieppe?
August 15, 2012
Follow us on Twitter @globeandmail Opens in a new window
Report an error Editorial code of conduct
Due to technical reasons, we have temporarily removed commenting from our articles. We hope to have this fixed soon. Thank you for your patience. If you are looking to give feedback on our new site, please send it along to feedback@globeandmail.com. If you want to write a letter to the editor, please forward to letters@globeandmail.com.
Comments