Saint-Jacques, who is currently training in Moscow, held a question-and-answer session by videoconference with four Quebec high schools.

Wearing his uniform and appearing against a bright yellow background, the Canadian astronaut said travel to Mars was out of reach for his own generation, but not for the next.

"On Mars, it's plausible that we can go in 20, 25, 30 years, so do the math," he told approximately 400 students from the Greater Montreal and western Quebec regions.

"The first people who will go to Mars are people who are about your age right now."

While Saint-Jacques will have to content himself with sticking closer to Earth, the 48-year-old will neverthless blast off for a space voyage of his own when he launches aboard a Russian Soyuz spacecraft later this year.

Saint-Jacques, who was trained as both an engineer and a doctor, will be the first Canadian aboard the space station since Chris Hadfield spent five months on it in 2012 and 2013.

On Thursday, Saint-Jacques spent about 40 minutes answering questions from students on topics including work-life balance, his physical fitness regime and how he'll feel as he leaves Earth behind.

At one point, he told the students his goal, like that of any first-time astronaut, is to not make any mistakes during his six-month mission.

He also spoke about his training, which he said is designed to make sure the astronauts can handle any task – from operating the Canadarm robotic arm to conducting science experiments and maintaining the shuttle.

Due to his medical training, Saint-Jacques will also serve as the mission's doctor.

Omar Metaich, a Grade 8 student from Montreal's College Jean-de-Brebeuf, asked Saint-Jacques how he'll feel about being cut off from Earth, even if only for a short time.

"I'm expecting to be dazzled by the beauty of Earth when I first get to see it from orbit," he said.

He also said he was looking forward to living in close quarters with his team.

"It'll be an adventure," he said. "We'll be a little group, like being shipwrecked or climbers on a mountain."

The answer impressed Metaich, who said he wouldn't mind going into space himself one day.

"(Saint-Jacques) explained that he might be scared but, at the same time, it's an experience to live," he said.

As for any future space missions of his own, the 13-year-old is keeping his options open.

"Why not?" he said. "We're the generation of the future now."

Canadian astronaut David Saint-Jacques to head to ISS in 2018 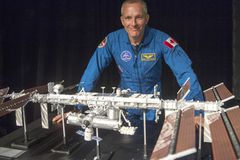 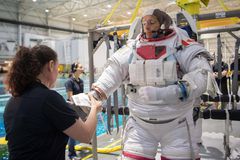 Meet Jennifer Sidey and Joshua Kutryk, Canada’s newest astronauts
Report an error
Due to technical reasons, we have temporarily removed commenting from our articles. We hope to have this fixed soon. Thank you for your patience. If you are looking to give feedback on our new site, please send it along to feedback@globeandmail.com. If you want to write a letter to the editor, please forward to letters@globeandmail.com.
Comments are closed