A Canadian businessman says he was arbitrarily detained and tortured for months by the security services of the United Arab Emirates in the second case involving a Canadian being held without trial in the tiny Gulf state.

Until now, relatives and human-rights groups had identified only one Canadian, Salim Alaradi, a 46-year-old former resident of Windsor, Ont., as being among 10 businessmen of Libyan origin who were arrested around August and September, 2014, by UAE state security officers.

Refat Hadagha, a 47-year-old former resident of Surrey, B.C., now says he was among the detainees.

He said his experience convinced him that Mr. Alaradi, who remains in custody, was also tortured.

Mr. Hadagha was freed in December, 2014, but he had not publicly spoken about his plight until now. He agreed to an interview after he was contacted by The Globe and Mail. "I was very afraid. My family was very afraid. But I can't handle it any more. … I need to talk," he said, his voice breaking down.

Human Rights Watch has denounced the arrests of the 10 men. Mr. Hadagha is identified in an HRW communiqué as "Detainee 2."

The group noted that those released so far told similar stories – they were handcuffed and taken away in a black GMC 4x4 vehicle to a detention centre, where they were kept blindfolded and repeatedly beaten and deprived of sleep.

Mr. Hadagha moved from Surrey to Dubai in 2004, and started a company importing electronics. His troubles began on Sept. 3, 2014, when he was prevented from boarding an Emirates flight for a business trip from Dubai to Tunis. The airline said he was barred at the request of the Dubai immigration authorities.

Two days later, as he drove with his family, several cars blocked his vehicle and plainclothes officers dragged him away, he said. Mr. Hadagha said he was driven to a secret prison, where he was kept in a windowless cell.

"The first time I was brought into the interrogation room, I remember clearly standing in the room blindfolded. I heard a man running full speed, and then I was punched with full force on my neck, knocking me to the ground, and then they tied me up and started to continuously beat me," he said in a written account sent to The Globe.

He said he was questioned about Libyan political groups, especially the Muslim Brotherhood and its operations in Libya. He also heard other detainees screaming. He recognized one of those voices as that of Mr. Alaradi, a friend.

Mr. Alaradi and his brother, Mohamed Elaradi, a Libyan national, were arrested at the end of August. Mr. Elaradi told HRW that he, too, was beaten and questioned about the Muslim Brotherhood.

"Most of the questions I was asked, I didn't know the answer. … I don't belong to any political party," Mr. Hadagha said.

He said his interrogators also tried to coerce him into becoming an informant for them, adding he was punched, kicked, flogged with a stick and whipped. "They would tie my hands behind my back, face on the floor and beat me. ... They would tie my hands around my legs with a rod under my legs and I would be hung upside down."

While he was detained, agents confiscated his family's passports. His family did not seek consular help from Libya because of the country's chaotic situation. They alerted Canadian officials, but only one consular visit took place.

He said he was taken out of his cell and driven to another building. Inside, the Canadian diplomat was kept seven to eight metres from Mr. Hadagha.

Mr. Hadagha said the consular official told him: "'I have permission to confirm your identity. … Please tell me your name.'" Mr. Hadagha gave his name. Then the visit was over.

A spokeswoman for Foreign Affairs, Trade and Development Canada said the department raised concerns about Mr. Hadagha's well-being with UAE officials. "Despite repeated requests, Canadian consular officials were not granted full and sustained access to Mr. Hadagha," Rachna Mishra said in a statement.

In the cases of Mr. Hadagha and Mr. Alaradi, "Canada takes allegations of mistreatment extremely seriously," she added.

Mr. Hadagha and three other men, including Mohamed Elaradi, were released without charge on Dec. 27 and deported to Turkey. A month later, Mr. Hadagha's wife and six children were given back their passports and left the UAE.

"I had a very good business, but I lost almost everything," he said. "I have physical problems. My children are not the same. … We all cry."

Mr. Alaradi's family, meanwhile, is still pressing for his release. His relatives were in Brussels last week to meet with European Union parliamentarians.

"I am hoping the EU helps bring my father home. I will knock on every door until he does," said Mr. Alaradi's 18-year-old daughter, Marwa.

Editor's note: An earlier version of this article incorrectly stated that Mohamed Elaradi , the brother of Salim Alaradi, a Canadian-Libyan detained in the United Arab Emirates, is a dual Libyan-American national. In fact, Mr. Elaradi does not have American citizenship. 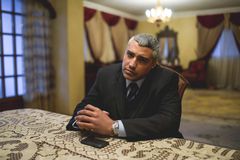 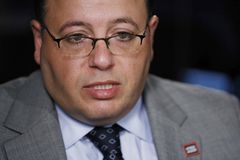