When Roxanne Dubé was appointed consul-general to Miami last November, her sons Marc and Jean Wabafiyebazu seemed enthusiastic about the move.

After spending much of their lives in Ottawa and Zimbabwe, the teens, 15 and 17, relished the idea of living in a city that has featured as a backdrop for many blockbuster films. "For them it really was a big move," their father Germano Wabafiyebazu said in an interview. "You see Miami in movies and everything, so to be now going there … they were really enthusiastic."

Ms. Dubé took up her new post in early February, Mr. Wabafiyebazu said, and the boys were enrolled in Miami high schools. Less than two months after they left Ottawa, he said, he is struggling to understand what went wrong.

Jean Wabafiyebazu was killed on Monday in a bloody daylight gun battle that police believe broke out during a marijuana drug deal at a Miami apartment. Mr. Wabafiyebazu's 15-year-old brother, Marc, was arrested for felony murder and was later accused of threatening a police officer. Under Florida law, any person who participates in a violent felony that results in someone's death can be charged with felony murder.

Germano Wabafiyebazu told The Globe and Mail that he was contacted by the boys' mother after the shooting occurred, and she relayed to him what she believed had happened. The teens had planned to drive around the city, Mr. Wabafiyebazu said, but Jean had an "appointment" at the house where the shooting took place. The father and Ms. Dubé have been divorced for several years.

"Marc went with his brother, according to their mother, to go just around the city. But Jean had this appointment. So he [went] there, left his brother Marc inside the car, and [went] inside the house," he said.

When Marc heard shots fired, he entered the building and found two people – including his older brother – shot to death, Mr. Wabafiyebazu said.

One of the suspected drug dealers in the house, Joshua Wright, was also killed, police told The Miami Herald.

A second man arrested in the case, 19-year-old Anthony Rodriguez, was granted a $150,000 bond on Wednesday. Mr. Rodriguez, who was found by police bleeding at a nearby gas station and is alleged to have been involved in a shootout with Jean Wabafiyebazu, is charged with murder, as well as possession of marijuana with intent to sell.

Jose Elortegui, the lawyer representing Mr. Rodriguez, said normally arraignments are scheduled for three weeks after the initial court date, but no specific date had yet been set for his client.

The shooting took place in an apartment near the corner of Southwest 36th Avenue and Southwest 17th Street. The area is a working-class part of Miami's Coral Way neighbourhood, less than a 10-minute drive from a palatial, terracotta-tiled mansion on Riviera Drive that once housed Canada's consuls in Miami; Ottawa put it up for sale last summer.

On Wednesday afternoon, several police cars were parked near the apartment. The area was cordoned off with police tape until midafternoon. Satellite vans representing many of Miami's biggest TV news stations were also parked nearby.

Mr. Wabafiyebazu confirmed to the Associated Press that the teens had borrowed their mother's car, with diplomatic licence plates, to drive to the house where the shooting took place.

Speaking to The Globe, Mr. Wabafiyebazu said he believes his older son had gone to the house to meet a drug dealer whom an intermediary had connected him with. He said he does not believe that Marc would have done something violent.

Mr. Wabafiyebazu said he was advised on Wednesday to stop speaking with reporters about his sons.

Before moving to Miami, Marc and Jean attended Lycée Claudel, a private French-language school in Ottawa that is popular with politicians and diplomats.

A spokesman for the Department of Foreign Affairs in Ottawa said Wednesday that the government is aware of a "serious incident involving a Canadian family in Miami." Canadian officials are assisting the family and local police, John Babcock wrote in an e-mail.

Diplomatic immunity, which provides some protection from prosecution under a host country's laws, does not apply in Marc Wabafiyebazu's case. That's because the limited immunity that is granted to consular officials, who deal with local authorities, does not extend to their family members. Ambassadors and diplomatic staff whose jobs require them to deal with officials from their host state have immunity, as do their families.

Ms. Dubé was Canada's ambassador to Zimbabwe from 2005 to 2008, with concurrent diplomatic accredidation to Angola and Botswana. She served as staff member for former Liberal MP and cabinet minister Lloyd Axworthy from 1988 until 1996, before joining the Department of Foreign Affairs in 1998. After her posting in Zimbabwe, Ms. Dubé returned to Ottawa, where she worked at the level of director-general in the Department of Foreign Affairs.

Mr. Axworthy told The Globe in a phone interview on Wednesday that Ms. Dubé had consistently impressed him with her work, both in his office and in the foreign affairs department. He said he received numerous e-mails from former staffers who knew Ms. Dubé and felt sympathy for what had taken place.

"She should know that she's got an enormous community, a support system of people that admire her incredibly and just wish her the best in these really tough circumstances," Mr. Axworthy said.

With reports from Affan Chowdhry and Associated Press 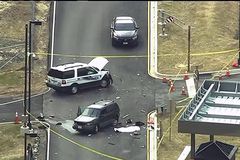 Follow Kim Mackrael and Omar El Akkad on Twitter @kimmackrael @omarelakkad
Report an error Editorial code of conduct
Due to technical reasons, we have temporarily removed commenting from our articles. We hope to have this fixed soon. Thank you for your patience. If you are looking to give feedback on our new site, please send it along to feedback@globeandmail.com. If you want to write a letter to the editor, please forward to letters@globeandmail.com.
Comments