Many Canadian kids are failing to make the grade when it comes to reaching physical activity targets, with too few hours devoted to active play and too much free time fixated on TV, computer and game screens.

Active Healthy Kids Canada released its annual Report Card on Physical Activity for Children and Youth on Tuesday which paints a grim picture of the activity levels of many Canadian youngsters.

An "F" grade was assigned in active play and leisure, with 46 per cent of Canadian kids getting three hours or less of active play each week — including weekends. What's more, 63 per cent of kids' free time after school and on weekends is spent being sedentary.

At lunch and after school, kids are getting only 24 minutes of moderate to vigorous intensity physical activity. It is recommended children and youth get at least 60 minutes of such activity daily.

Beyond reducing sedentary behaviour — activities that involve little physical movement and a low expenditure of energy — there are many beneficial byproducts of active play, noted Mr. Tremblay, director of Healthy Active Living and Obesity Research Group at the Children's Hospital of Eastern Ontario Research Institute.

But whether it's kids glued to TVs, computers or games or parental phobias about potential dangers, screen time and safety worries are seen as barriers limiting opportunities for outdoor play.

The report finds kids in Grades 6 to 12 spend seven hours, 48 minutes each day on screens. That figure outpaces the recommendation of no more than two hours of screen time daily.

A survey featured in the report reveals 82 per cent of mothers cite safety concerns as reasons why they restrict outdoor play, such as worries about crime, traffic, outdoor darkness, lack of supervision and neighbourhood dangers like bullies and rundown buildings. In another poll, 58 per cent of Canadian parents say they're very concerned about keeping their kids safe and feel they have to be overprotective of them.

Kelly Murumets, president and CEO of ParticipAction, suggests one potential solution to help allay fears could be to have parents or caregivers alternate supervising kids outdoors. She also recommends streetproofing kids to inform them of basic safety measures, and encouraging them to play with a buddy.

Ms. Murumets also suggests making family time active time, such as an after-dinner walk, or heading to the park or playground to kick a ball around or shoot some hoops.

"Kids can help us do yardwork, or even if you are out there cutting the lawn, your kids can be playing at the same time," said Ms. Murumets, whose organization is launching a play-focused campaign this fall. "You can keep an eye on them, you're doing your thing and they're doing their thing."

Tamara Grand works at the Port Moody Recreation Complex and also trains private clients, mainly women in their late 30s into their 60s. But despite her busy schedule, the wife and mother of three works to ensure her kids stay active.

Her 13-year-old son and nine-year-old daughter participate in taekwondo, while her seven-year-old son plays ball hockey. Beyond structured activities, the kids will spend most weekdays outdoors for an hour after school, with hockey nets, scooters and soccer balls or brainstorming different games. Weekend walks are also part of the family routine.

Still, Ms. Grand, who lives in the Vancouver suburb of Port Moody, said her kids sometimes need nudging to shut off screens.

"They love their electronics like most kids their age, and I think if we didn't encourage them to get off they would probably spend most of their day on them," said Ms. Grand, noting computer time is limited to after school and a little bit after dinner.

The 44-year-old, who blogs at http://fitknitchick.com, said one of the things she observes among many clients is a tendency to overstructure kids' activity time. While their kids get lots of activity playing hockey and soccer or going to dance and gymnastics, they tend not to have time for unstructured play.

"That worries me, because when I was growing up it was all unstructured time. It was `Go outside we'll call you when dinner's ready' and we just found our own things to do."

Ms. Grand said she encourages her clients to lead by example when it comes to getting kids moving.

"We spend way too much time focusing on work and things that fill up our day, like Facebook and social media — things which I find I'm guilty of because it's partly my job," she said.

"But if we really want our kids to get more physically active we have to do it first and show them — not tell them." 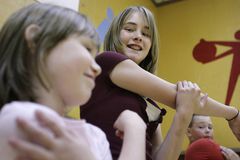 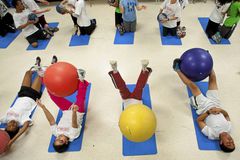