She came from a family that was always involved in charity and community work in their small town in the British Columbia Interior. Now, at the instigation of her grieving relatives, Chrissy Archibald's death on London Bridge has triggered an outpouring of charitable donations on two continents.

From the Choices for Youth agency in St. John's, to Covenant House in Vancouver, from the Shelter Cymru in Swansea, Wales, to the Preble Street mission in Portland, Me., people responded to her family's urging that they honour her death by volunteering or donating to their local charities.

Ms. Archibald, a 30-year-old social worker, died in her fiancé's arms on Saturday when a white van mounted a sidewalk and plowed into pedestrians on London Bridge.

Three attackers then ran into the nearby Borough Market brandishing knives. Seven people died and dozens were injured before police shot dead the assailants. It was the third terrorist attack in less than three months in Britain.

Ms. Archibald's family has called for acts of generosity to honour her. "Volunteer your time and labour or donate to a homeless shelter," they said in a statement. "Tell them Chrissy sent you."

Further, her fiancé's family on Monday said they will start a foundation in Ms. Archibald's name.

"Let's all keep her alive and not let this beautiful soul die in vain," Mark Ferguson, brother of the victim's fiancé, Tyler, said on Facebook.

Friends and strangers around the world responded, donating everything from clothes to cash to charities and outreach organizations, and nudging others on social media to do the same.

Ms. Archibald grew up in Castlegar, B.C. She studied social work at Calgary's Mount Royal University and worked at the Alpha House Society, an agency helping people with substance-abuse problems through its detox, housing, outreach and shelter programs. She started in an outreach van and shifted to the organization's shelter program, according to Kathy Christiansen, Alpha House's executive director. The international support for the less fortunate in Ms. Archibald's name reflects her spirit, she said.

"Chrissy was a gift," Ms. Christiansen said in an interview Monday. "The tragedy that happened – there's no gift in that, except she may think that raising the profile of the men and women that we serve would be important."

"She was quite connected to the shelter and the staff and the clients," Ms. Christiansen said. "The work came very naturally to her. She had a real affinity for the people that we serve."

Ms. Archibald has two sisters, one her identical twin, Caroline. Their parents, Greg and Barbara, are retired elementary-school teachers who have taught many of the town's schoolchildren, former colleague Leo Terava said.

The sisters were "good students and good citizens," Mr. Terava said. "They are an exemplary family. I can't say anything bad about them."

Ms. Archibald, according to the CBC, was in London visiting her future husband. Tyler Ferguson was there on business, according to his brother, Mark, in an interview with CBC.

"[Tyler] heard tires screeching and he looked back, and he just saw the mayhem going on and the van hitting people," Mark Ferguson told the CBC. "He tried CPR on her. … First responders showed up right away and they tried to do everything they could for her.

"She passed in his arms."

Tyler Ferguson's parents and one of his best friends are in London now, according to his sister's Facebook. Ms. Archibald, who graduated from social work in 2015, left Alpha House in February, when she moved to Europe to be with her fiancé.

Peter Choate taught Ms. Archibald when she was studying social work and said she knew the limitations of her job.

"She was compassionate, she had a heart, she cared," Prof. Choate said.

"She understood the clients are in charge of their own lives. She's there to help, she's there to guide, she's there to offer support," he said. "She recognized that she couldn't make decisions for people. [That's] a very important part of being a successful social worker."

Ms. Archibald's colleagues, mourning on Facebook, recounted stories about her.

"To the most beautiful flower, Chrissy, my last memory is hugging you so tight to say goodbye on your new life adventure – telling you how proud I was of your endeavour of love, travel and happiness," wrote Karen Ann Steele, who said she worked with Ms. Archibald. "Selfishly I wanted you to stay, as I knew we were losing an irreplaceable worker."

London terror attack: What we know so far about the suspects, victims and more
June 4, 2017 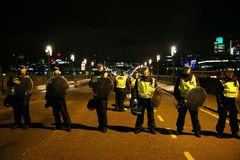 Tensions rise after third terrorist attack in Britain in past 10 weeks
June 5, 2017
Follow Tu Thanh Ha and Carrie Tait on Twitter @TuThanhHa @CarrieTait
Report an error Editorial code of conduct
Due to technical reasons, we have temporarily removed commenting from our articles. We hope to have this fixed soon. Thank you for your patience. If you are looking to give feedback on our new site, please send it along to feedback@globeandmail.com. If you want to write a letter to the editor, please forward to letters@globeandmail.com.
Comments