The military's top police officer says his service will review all sexual assault cases that were dismissed as unfounded going back to 2010, making the Canadian Forces Military Police Group one of more than 50 forces to commit to similar audits in response to a Globe and Mail investigation.

Brigadier-General Robert Delaney, chief of the military police, said he is hoping to include outside expertise in that review, similar to a program that has been running in Philadelphia since 2000, in which local advocacy groups are invited once a year to go through the police department's sex-assault case files for signs of bias and investigative deficiencies. The model is considered the gold standard in police accountability.

The military police say 167 unfounded cases will be in its review.

Unfounded: Why police dismiss 1 in 5 sexual assault claims as baseless

Brig.-Gen. Delaney said the audit will look at not just whether cases were improperly classified due to clerical errors, but whether investigative missteps contributed to a classification of unfounded, which means the investigator does not believe a crime occurred.

"I really want to get into each and every case and determine if we got it right," said Brig.-Gen. Delaney, the Canadian Forces Provost Marshal.

"Until I do a real, deep dive into every single case, I won't know why we made the determination of unfounded … and I need to know that. I need to know if we've made mistakes from an investigative standpoint. Or from a categorizing [error]."

Brig.-Gen. Delaney said that while the service prepares its review process, it has already instituted a policy that requires a commanding officer's approval to designate an allegation as unfounded.

A 20-month Globe and Mail investigation determined that, on average, Canadian police services are dismissing one out of every five sexual-assault complaints as unfounded, nearly twice the rate at which physical-assault allegations are classified as baseless.

Once a police officer classifies a case as unfounded, it is no longer considered a valid complaint. Unfounded cases are not reflected in local or national statistics, and are not reported to Statistics Canada.

Through freedom of information requests, The Globe obtained data from 873 police jurisdictions across Canada. The military police force, which investigates crime within the Canadian Forces, was not included in The Globe's review, but Brig.-Gen. Delaney said that, after reading the coverage, he requested staff to report on the service's unfounded rate for sexual assaults.

That initial scan revealed that between 2010 and 2014 – the five-year period that coincides with the Globe's data – the military police dismissed 29 per cent of cases as baseless. As of 2016, the service's unfounded rate was only 11 per cent.

The reason, Brig.-Gen. Delaney said, is that in early 2015, former Supreme Court justice Marie Deschamps released the report on her external review of sexual misconduct and harassment in the Canadian Armed Forces, which he called "an eyeopener" for the military.

"As a direct result of that review, we took some definitive steps to change our approach to investigating sexual assault," he said.

Since The Globe's Unfounded series launched a month ago, at least 54 police services – including municipal forces in Ontario, Quebec, New Brunswick, Prince Edward Island, Saskatchewan, Alberta, British Columbia and Nova Scotia – have announced reviews of unfounded cases. That is just shy of a third of the country's police services.

But what is covered in the scope of these reviews has been the subject of significant concern among academics and advocacy groups, who say outside experts must be involved for any audit to be effective. They pointed to a system in Philadelphia's police department that brings in outside experts once a year to go over unfounded sex-assault cases.

"Internal reviews are inadequate to ensure that real and long-lasting change occurs. Without the kind of community oversight possible with the Philadelphia model, it is easy to change the way cases are coded without any meaningful change in the way victims are treated by police," said Holly Johnson, an associate professor of criminology with the University of Ottawa who has studied unfounded rates.

To date, The Globe has found only five police services – North Bay, Brantford, Cobourg and Hamilton, all of which are in Ontario, and now the military police – that have said they are open to including external advocacy groups in their review.

Geoff Nelson, the chief of the Brantford Police Service, said his force is almost finished its case audit. The Brantford service included representatives of the city's sex assault centre and victim services agency, a professor from Wilfrid Laurier University, an official with the Brant Community Health Care System, and a legal expert on violence against women, Chief Nelson said.

The review team was given full access to the case files, but to address privacy concerns, the service redacted the names and addresses of anyone mentioned in the court file and the group was not allowed to view video or photographic evidence.

"This was an opportunity to examine sexual assault investigations through the lens of a victim –these are victims' advocates," Chief Nelson said. "They certainly bring a different perspective. The end result will be better investigations and... a better understanding of victims."

On Wednesday at a conference organized by the Department of Justice on the judicial system's response to sexual assault, Justice Minister Jody Wilson-Raybould called the Philadelphia model an "exciting" idea. 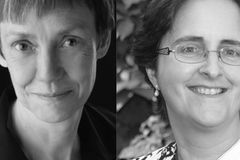 Quebec reviewing dismissed sex assaults after Globe investigation
February 16, 2017
Follow Robyn Doolittle on Twitter @robyndoolittle
Report an error Editorial code of conduct
Due to technical reasons, we have temporarily removed commenting from our articles. We hope to have this fixed soon. Thank you for your patience. If you are looking to give feedback on our new site, please send it along to feedback@globeandmail.com. If you want to write a letter to the editor, please forward to letters@globeandmail.com.
Comments