A team of Canadian researchers has developed one of the most effective cures yet for the Ebola virus. That's big news both for treating the deadliest virus on Earth and tackling myriad other similarly aggressive diseases.

The treatment, in which injections of protein-grabbing antibodies stop a virus from replicating, has the longest treatment window so far resulting in full recovery – a full day. There's just one catch: It can take up to two weeks for symptoms of the disease to appear.

In an article published Wednesday in Science and Translational Medicine, Gary Kobinger and several others outline the cocktail of antibodies they used to treat macaque monkeys infected with the most lethal strain of Ebola virus. All the macaques treated 24 hours after infection recovered, as did half of those treated after 48 hours.

It's big news for a notorious virus, which can kill up to nine of every 10 humans infected (the most virulent strains of flu, by comparison, kill about five of every hundred infected). Up until now, the best treatment was only good for less than an hour after exposure.

Ebola is a hemorrhagic fever most commonly found in Africa. In the past several years, it's gone from fodder for horror novels to a concern for bio-security experts and public health officials alike. it becomes easier to synthesize or transport a virus and as global travel increases, the risk of an outbreak grows.

The Canadian researchers behind this treatment hope they can apply the same strategy to other viruses.

"This is a leapfrog that brings everything forward," said Dr. Kobinger, head of vector design and immunotherapy at Winnipeg's National Microbiology Laboratory. "That's why we're so excited. … If we use the same technology, we can adapt it."

The treatment is a new take on an old method: Researchers produced three antibodies designed to bind to different proteins on the Ebola virus's outer coat. The antibodies are administered in three injections – one after 24 hours, one on Day 3 and one on Day 5.

Once the antibodies have glommed on to the Ebola's protein coat, they slow it down and prevent it from replicating. This buys the immune system time to build a response and eradicate the virus.

"It's encouraging," said Gary Nabel, director of the U.S. National Institute of Health's vaccine research centre in Bethesda, Md. "It's an unusual finding in that there have been other studies using antibodies that have failed to protect. They're using a cocktail of antibodies that seem to be doing better."

Dr. Nabel noted, however, that it's difficult to imagine how a complex treatment requiring multiple injections like this would translate into a more volatile outbreak setting.

Dr. Kobinger's next challenge is to push that 24-hour window to 72 hours. The tricky thing about treating Ebola is that it has a 10-day incubation stage: By the time a person starts to show symptoms, it's too late.

But 72 hours after infection, doctors can detect the virus in the blood – a trigger for treatment. A cure that was effective after that point would be much more useful.

Preliminary results suggest the Winnipeg-based researchers might be able to do that by combining this triple-antibody treatment with an Ebola vaccine they're working on. The two together could make for an effective cure days after infection.

On a pragmatic level, getting this research published in a well-regarded journal could make it easier for Dr. Kobinger to ask for continued government funding in a cash-strapped environment.

The Department of National Defence has funded much of his research so far, but has indicated in this year's budget it may cut back on anything except but Arctic security and cybersecurity.

Canadian doctor zeroes in on vaccine for Ebola virus
May 4, 2012 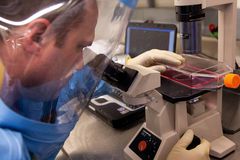