In late November of 2009, a 60-foot yacht named the Barbara sent out a distress call after being stranded without an operable rudder 120 nautical miles northwest of Bermuda. The U.S. Coast Guard did not hear it. But Herb Hilgenberg did.

The former financial executive and mechanical engineer picked up the signal on the marine radio he had set up in the basement laundry room of his home in Burlington, Ont. After alerting the authorities to the Barbara's plight, he told the ship's captain to create a makeshift rudder using any large object that would float, like a foam mattress or a wooden door. Then he kept round-the-clock communications with the vessel for more than two days until the Coast Guard could get it towed to port.

For that and countless other rescues over 25 years of voluntarily providing weather information and sailing smarts to ships travelling the high seas, Mr. Hilgenberg was presented in December with the United States Coast Guard's Meritorious Public Service Award. An American Coast Guard spokesman said it was the first time he remembers the award going to a Canadian.

"I was able to avoid rescue situations by keeping people out of trouble," Mr. Hilgenberg, 76, who retired from his marine broadcasts last June, said in a telephone interview with The Globe and Mail. "There were times when I had to call the Coast Guard in order to avoid a situation, or there [were situations in which] the Coast Guard would call me."

Mr. Hilgenberg's specialty was weather prediction. Using data provided by the U.S. Navy, the National Weather Service and the conversations he had with people on board ships travelling the Atlantic, the Caribbean, the Gulf of Mexico and sometimes even the Mediterranean, he could figure out better than almost anyone where a storm was brewing and how to avoid it.

In its citation, the Coast Guard says he "selflessly volunteered up to eight hours a day bridging the gap in offshore weather and communications." It also says his conversations with as many as 80 vessels a day "prevented 100 to 150 mariners per year from unknowingly sailing into dangerous storm conditions and avoided potential United States Coast Guard sorties during treacherous weather."

Mr. Hilgenberg has always loved sailing. His wife, Brigitte, shared his passion, and he says their two daughters were practically born on their sailboat. In November, 1982, the family sailed their 39-footer from New York to the Virgin Islands and got caught in a late-season tropical storm.

"Whatever information we got when we left was good. But it was only good as far as near-shore forecasts were concerned, not 100, 200, 300 or 1,000 miles out. So we just ran into that storm," said Mr. Hilgenberg. "We survived. Some of the boats that we left with did not survive."

A year later, he took a job as a chief financial officer in Bermuda where he and his family lived for the next decade. "And I began to realize that, my God, we were not the only idiots who had run into this kind of a situation. It was happening every day. And that's when I said maybe I can do something about it."

Using his ham radio in the evening after getting off work, he kept in touch with ships that left Bermuda. Sometimes, when they were halfway across the Atlantic, they would run into storms and the captains would ask Mr. Hilgenberg to plot a route to safety.

"I was using that information to now start to make an analysis of what was happening out on the Atlantic," Mr. Hilgenberg explained. "I used that to guide the ships across the Atlantic. And they, in turn, gave me the information that they were encountering and I passed that on to the U.S. naval station in Bermuda and the National Weather Service in Washington D.C."

In 1994, Mr. Hilgenberg retired from his job and moved back to Burlington. "I basically figured that was it, I wouldn't do any more communication with boats," he said. "But I was getting phone calls from people saying, 'Look, can you continue to help us obtain weather information and help us across the Atlantic and to avoid bad weather?'"

So he applied for a high-frequency marine radio station licence with Industry Canada, put a pair of satellite dishes in his backyard, and moved the washer and dryer out of his laundry room to create a marine radio station. Every day, he would obtain weather data starting at about 10 a.m., conduct his analysis, then begin talking with the ships by about 3 or 4 p.m. – a process that did not end until mid-evening.

"I was doing this seven days a week, many hours a day, for 51 weeks a year," Mr. Hilgenberg said.

Marc Hersch of Santa Cruz, Calif., is one of the people who relied on Mr. Hilgenberg's forecasts. "He was truly a godsend for people sailing small boats on oceans," said Mr. Hersch, who crossed the Atlantic with his family in a 42-foot sailboat and lived by Mr. Hilgenberg's advice. It was hugely comforting, he said, adding that he believes Mr. Hilgenberg saved him from trouble many times. "He was a very colourful character who became virtually an institution on the boat," Mr. Hersch said. "A lot of our sailing activities centred around the schedule and the messages he delivered to us."

There were many stories of high drama. Like the time three elderly people set out for the Virgin Islands from Jacksonville, Fla., in a 42-foot boat as a storm approached.

Mr. Hilgenberg warned them to turn back but they assured him they were experienced sailors and would be just fine. Then the weather caught up to them and they had a problem with their rudder. And, although they had an emergency beacon, it was an older type that did not provide the ship's location. So Mr. Hilgenberg contacted the Coast Guard and provided the position of the distressed ship. Helicopters rescued the three seniors just before their boat sank below the water.

By the time Mr. Hilgenberg retired from his marine broadcasts, there was not as much need for his services as there was 25 years ago. Internet technology had progressed to the point where ships far from land could access their own weather charts and satellite images. Even so, sailors on Internet bulletin boards lamented losing his trusted advice.

Saving boats and their crew from peril made the work worthwhile, Mr. Hilgenberg said: "To listen to what all the boats you are talking to are experiencing, and how you are getting them out of trouble, and how you are helping them. It was fantastic."

Rescue from container ship off Newfoundland was an adventure, Swiss tourist says
May 11, 2018
Sub HMCS Chicoutimi, repaired after 2004 fire, is rejoining Canada’s fleet
May 11, 2018 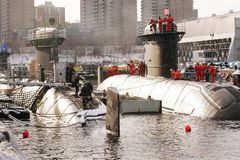 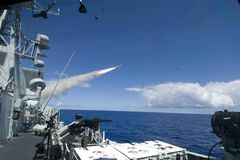 Despite delays, Ottawa pushes ahead with Cyclone chopper plan
May 11, 2018 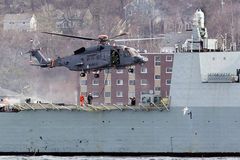 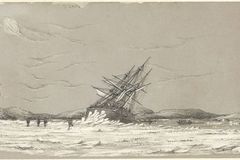