A Canadian woman and her American boyfriend who had been missing for days in Belize died of strangulation, local police said Tuesday as the pair's friends and families were struggling to come to grips with their loss.

The bodies of Francesca Matus, 52, of Toronto, and Drew DeVoursney, 36, from Georgia, were found Monday afternoon in a sugar cane field in the country's Corozal district.

Police said in a statement that DeVoursney's body was found on top of Matus's body, and both were in an "advanced state of decomposition."

Authorities said the deaths were being investigated as homicides.

The pair had been missing since last Tuesday when they were last seen leaving a local bar around 11 p.m. Dozens of Canadian and American expats were involved in the search, scouring the beaches, waterways and the bush.

On Sunday afternoon, Matus's car was found in a sugar cane field about 15 kilometres from the bar.

Friends and family said Matus and DeVoursney had been dating for several months.

Matus was scheduled to return to Canada last Wednesday, but when her friend, Joe Milholen, arrived at her house to take her to the airport, her car was gone and the house locked up. Milholen said he later found her packed suitcases, passport and travelling money inside the house.

Matus had been in Belize since December, said her cousin Ivana Pucci, enjoying life on her waterfront property. She used to spend winters in the central American country and return to the Toronto area for summer and fall to be with her mother and her two twin sons, aged 22, Pucci said.

"She loved it there and felt safe," Pucci said. "She did tell us it was lawless there, but she felt safe in her little community."

Her boys, brother and mother are grieving together in the Toronto area, Pucci said.

Matus grew up in Sault Ste. Marie, Ont., as part a sprawling Italian-Canadian family, Pucci said. She moved to Toronto after college and became a mortgage broker, which she still did for half of the year. She loved the water and boating in Belize, she said.

"She was 52 in a 35-year-old body," Pucci said. "She really was such a beautiful person — both inside and out — and she did not deserve this. Nobody does."

Pucci didn't know much about Matus's relationship with DeVoursney, but said she appeared to be happy.

In Georgia, DeVoursney's mother, Char, said she learned about her son's death from the U.S. embassy in Belize. They told her the pair had been murdered and found with duct tape around their wrists, she said.

"I'm not able to really do anything, kind of just sit and think and cry and that's all I'm capable of at the moment," she said.

Her other son, David, was at the Atlanta airport Tuesday morning with DeVoursney's best friend, Brandon Barfield, waiting to board a flight to Belize.

Drew DeVoursney was a big man with a big heart and a big smile, his mother said. The six-foot-six former marine had overcome post-traumatic stress disorder while serving two tours in Iraq, she said.

About four years ago, he bought a piece of property with Barfield in Belize — with nothing on it — and went down in December with the idea of starting his own dive company, his mother said.

"He's a real adventure boy, that's what I call him, my adventure boy because he's done so many different things," Char DeVoursney said.

Drew DeVoursney went to college in North Carolina on a soccer and academic scholarship, but never finished.

"Then 9/11 happened and he went straight into the marines," she said.

He ended up going to Afghanistan for two years after he left the marines as a contractor to help soldiers learn how to use technology on the battlefield.

"I've dreaded news of his death, but that was when he was in Iraq and Afghanistan," Char DeVoursney said as she sniffled.

She said her son was having trouble getting work in Belize, so he decided to return home.

"He was supposed to come home next week and was signed to start school with his brother where he was going to learn to operate heavy machinery," she said. "Now he's coming home in a way I've always dreaded." 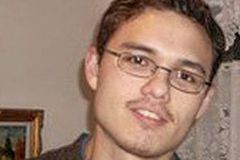