A controversial pesticide banned in Canada has been discovered in products sold by a federally licensed medical marijuana producer, The Globe and Mail has learned, but neither the company nor Health Canada have informed the public.

Myclobutanil, a chemical that is also prohibited for use on legal cannabis in Colorado, Washington and Oregon because of health concerns, was found in product recently recalled by Mettrum Ltd., a Toronto-based medical marijuana company.

The pesticide is not approved for use on plants that are combusted, such as tobacco or cannabis, and is known to emit hydrogen cyanide when heated. Lawmakers in the three U.S. states moved quickly to ban myclobutanil, in some cases enacting emergency legislation when they discovered growers using it.

But the lack of public disclosure by Health Canada raises new questions about what controls are in place to ensure the product is free of contaminants and chemicals, particularly as the government prepares to introduce legislation to legalize the drug next year.

A Globe investigation this summer called into question the department's ability to detect potentially dangerous contaminants, and revealed that Health Canada standards at the time did not require testing for myclobutanil and other banned chemicals.

The Mettrum discovery was made recently, when a random screening of the company's products by Health Canada turned up the unauthorized use of pyrethrin, a pesticide derived from the chrysanthemum plant that is also not approved for medical cannabis.

Mettrum issued a voluntary recall of the affected products on Nov. 1 and said the pyrethrin was used by mistake, because it was not listed on the ingredients of a spray the company was using.

But when Health Canada performed further tests on the samples, it also discovered they contained myclobutanil, which all producers know is a banned substance. However, for reasons that are not immediately clear, neither Health Canada nor Mettrum announced the findings to the public.

Instead, on Dec. 1, Mettrum issued a vague press release saying that "as a result of further testing and working with the full co-operation of Health Canada," the company was adding "a small number of additional product lots" to its previous voluntary recall. The company made no mention of myclobutanil.

It was only after The Globe was informed of automated phone messages Mettrum left with some of its customers, which made passing reference to myclobutanil during a lengthy recording, that a reporter called the company's customer service line to inquire.

A Mettrum employee said the recall was due to a "nutrient spray" that mistakenly contained pyrethrin. "We just want to be transparent," he said.

However, it was only after the employee was asked specifically if the recall also involved myclobutanil that he acknowledged the more controversial chemical had been found. "Yes, that was also included as well," the Mettrum employee said.

When Mettrum was later asked why the company hasn't acknowledged the discovery of the banned pesticide in a press release, the company said in a statement to The Globe that its plan to communicate only with customers was approved by Health Canada. The company said only "trace levels of myclobutanil" were found.

When asked why Health Canada did not provide disclosure to the broader public, the department said it determined that "exposure to the affected cannabis products would not likely cause any adverse health consequences," so no wider warning was necessary.

Health Canada did not explain how it determined there was no health risk, since microbiologists and lawmakers in the United States consider there to be no acceptable level of myclobutanil in cannabis.

Sold under the name Eagle 20 or Nova 40, the chemical is used to control a pest known as powdery mildew in crops such as grapes and berries, but is also known to be employed as a shortcut by illegal cannabis grow-operations when a crop is threatened by an infestation.

However, cannabis is much different. Like tobacco, it is usually smoked, not eaten, so any chemicals used on the plant are often inhaled directly into the lungs, and make their way directly into the bloodstream without being metabolized, or broken down, by the digestive system. As well, cannabis, due to its unique makeup, is known to retain more pesticide residue than many edible plants.

Policy makers in the United States acted quickly to clamp down on myclobutanil use when it was discovered a few years ago. Washington state enacted emergency legislation. In Colorado, the government ordered mass recalls, raided production facilities and threatened companies with large fines. Colorado also went public with the names of producers caught using the chemical.

"Myclobutanil cleaves off hydrogen cyanide," Andrew Freedman, director of marijuana co-ordination for the Colorado state government told The Globe this summer. "So yeah, we were concerned."

"For us it was a pretty easy answer … If you can't prove it's safe, then we shouldn't allow it to go out for human consumption," Mr. Freedman said.

When Health Canada was asked by The Globe in September what the government would do if a banned pesticide such as myclobutanil was found in product grown by one of the country's 37 licensed medical marijuana producers, the department said it had a zero-tolerance policy.

A Globe investigation in September revealed that several unregulated cannabis dispensaries in Vancouver had sold products containing dodemorph, which is not approved "for any human use" and that Health Canada was told of the problem. However, Health Canada did not act, or warn the public, because it considers store-front dispensaries to be illegal, though the government does not prevent them from operating.

Mettrum did not say how the myclobutanil ended up in its product.

The use of potentially harmful chemicals in medical marijuana can be hazardous since the product is considered medicine and is sometimes used by patients with compromised immune systems. In Canada, there are only 13 pesticides approved for use on medical cannabis.

Health Canada said in a statement that it is "looking at ways to make all cannabis product recalls, regardless of the level of risk, publicly available." The department did not say why such concerns aren't made public now. 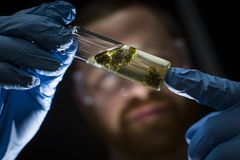 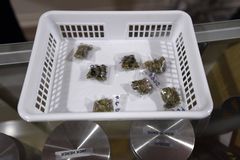