A federal court has stayed charges against a high-profile Toronto doctor who was accused of importing Actovegin, a drug not approved by Health Canada.

Although both Actovegin and human growth hormone can be used as performance-enhancers, Dr. Galea maintains he has never administered them for that purpose. Rather, his legal team has argued, he was a medical innovator looking for different ways to treat injuries.

"This was a physician engaged in high-level healing in a progressive approach to medicine," said his lawyer, Brian Greenspan. "He was never involved in performance enhancement."

Proponents of human growth hormone and Actovegin, which is derived from calves' blood, claim these substances have healing properties; critics, however, say there is little medical evidence.

A spokesman for the federal prosecution service said it had evaluated two factors in Dr. Galea's case – whether it was in the public interest to proceed and if there was a reasonable prospect of conviction before deciding on a stay.

Mr. Greenspan said the Ontario College of Physicians and Surgeons had been monitoring the case, but he did not know if it would take any action. Dr. Galea has not faced any charges with the college.

"[His practice]is busier than ever. His waiting room is as filled as it's ever been with people hoping he can take them on," he said.

Last October, a Buffalo judge decided not to send Dr. Galea to jail, citing more than 100 letters he had received from professional athletes supporting him.

Why Jose Bautista is unfazed by MLB drug testing
March 18, 2012 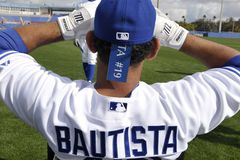