Chris Hadfield may be back on the ground but his science mission remains in full flight. Since his return from the International Space Station last week, the Canadian astronaut has decamped to NASA's Johnson Space Centre in Houston, Texas, where he's become the guinea pig for a full range of experiments designed to monitor how his body is re-adjusting to life on Earth after near five months in orbit. And – being Chris Hadfield – he's also tweeting about it, giving his nearly one million Twitter followers a glimpse into a fascinating and sometimes disorienting recovery process.

Mr. Hadfield spoke to the Globe and Mail's science reporter Ivan Semeniuk about his transition back and about a mission that re-focused the world's attention on human space flight.

You've been to space before on shorter flights. How does it feel coming back this time?

It's very different this time. I think that's because after three weeks or maybe a month in space I was truly adapted to being a creature living in weightlessness and that never happened on my previous two flights. This time the physical toll is much higher. The re-adaptation of my balance system is taking time. My blood pressure regulation had given up on fighting gravity – it no longer had to. So just standing up can cause my blood pressure to plummet.

It's been 18 years since your first trip to space. How has the recovery process changed since then?

One of the things we observed after my flight to the Mir space station in 1995 was the loss of skeleton – because we didn't understand how that was controlled nor did we have the equipment on board to combat it. Now we can basically beat it through a combination of diet and exercise. I worked out two hours a day for the last five months. My body is strong – it may not be balancing well, but it's strong.

What do you mean by not balancing well?

It feels like you're groggy or dizzy all of the time – like I've just stepped off a roller coaster at the CNE. When I stop moving, the world continues to move for a while. When I turn there's a sense the world is turning. At first it made me nauseous, but I stopped taking anti-nausea medication a couple of days ago. I just want my body to deal with it.

What's keeping you mentally engaged through all this?

During this rehab period we're trying to squeeze all the science we can out of this experience and a lot of it is physiological, so a large part of my schedule – hours and hours every day – is driven by rehab, by gathering all the fluid samples I can produce and by putting me through batteries of tests. But then starting next week we begin technical debriefs. We want to learn everything we can about how we performed on the space station. Our crew set records.We managed to accomplish a space walk on almost no notice. By 25 per cent we increased the amount of scientific work that has ever been done on space station. So there's great interest in how we did that, and how we organized our time. In amongst everything else, documenting that scientific legacy is at the core of what's important and what is taking almost all of my energies right now.

How much more ambitious do you think science could be on the space station?

You know the space station has really just come into its own. One of the main aims during our five months was to put in a wildly improved communications system. We increased by about a factor of one hundred the ability to send data up to the space station and to bring data down. If you're a scientist on the ground trying to run experiments on board, that high speed bandwidth increases your capability dramatically. One day we had all four of our communications channels going simultaneously with scientists in Russia, Houston, Portland and Norway all talking to the station at the same time. We showed that increased capability is there if we can just organize and use it. It's a big thriving, humming laboratory and we did our part to help improve that.

You were well known for playing your guitar in space. Did that help you in your work?

Since I was a kid, music is always how I've relaxed. It's a primal necessity. It's fundamental to who I am and how I enjoy things. We're not robots up there. I think the music is part of the humanity of the experience. It's important and I'm delighted that it was also a facet of what we got to do while we were there.

And where do you go from here?

Canada Day in Ottawa, which will be a lot of fun. And I'll be the parade marshal of the Calgary Stampede. Beyond that there are a lot of options and things going on but it's way too soon to be focusing on any of that.

So, is astronaut Chris Hadfield interested in politics?
May 17, 2013 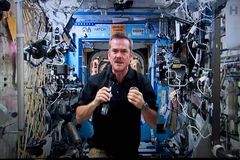 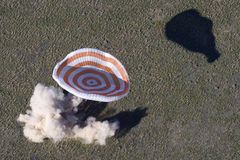 Back on Earth, Chris Hadfield ‘tottering around like an old man'
May 16, 2013 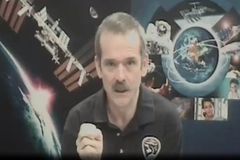 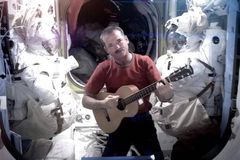 How the Maple Leafs broke an astronaut’s hockey-loving heart
May 17, 2013 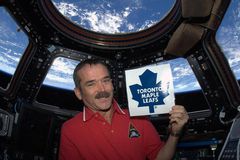 From Bowie to barf bags: Chris Hadfield's best social media moments
May 13, 2013
Follow Ivan Semeniuk on Twitter @ivansemeniuk
Report an error Editorial code of conduct
Due to technical reasons, we have temporarily removed commenting from our articles. We hope to have this fixed soon. Thank you for your patience. If you are looking to give feedback on our new site, please send it along to feedback@globeandmail.com. If you want to write a letter to the editor, please forward to letters@globeandmail.com.
Comments