More than a decade after one of Canada's most powerful entertainment couples was toppled by scandal, and thousands of investors lost millions, a saga of fraud, fleeting fame and a freakish death has taken a surprising turn with the jailing of one executive and the hunt for three more.

Hasasanain Panju, the former chief financial officer of Cinar, an animation company that was once the darling of Bay Street and Hollywood, will appear in a Montreal court on Thursday morning to face charges in connection with a $120-million fraud that shook the film industry.

Two associates, John Xanthoudakis, and Lino Pasquale Matteo, are also wanted in connection with allegations of a related investment scam.

The four face a total of 36 fraud-related charges in a bizarre tale dating back to 1998 that saw wholesome children's TV fare get tangled up with sordid allegations of forgery and offshore bank accounts.

For a time, Mr. Weinberg and Ms. Charest were the golden couple of the film industry.

Cinar's TV shows for children such as Caillou and Arthur - "non-violent, pro-social and educational" as Mr. Weinberg boasted - took the entertainment world by storm. At its peak, Cinar had a stock market value of $1.5-billion and the couple were running at "200 miles an hour," as Ms. Charest liked to say.

They had it all - a splendid mansion on the hill in posh Westmount, membership in an exclusive country club in the Eastern Townships and the glamour of Hollywood.

Ms. Charest was in the top 20 of the Hollywood Reporter's list of the 50 most powerful women in show business - ahead of Madonna and Barbra Streisand.

"They were everywhere," said one high-society Westmount lawyer. "And then everything went to hell."

Like a Hollywood soap opera, the success story came crashing down in March, 2000, when Cinar's board accused the power couple of squirrelling away about $122-million (U.S.) in Bahamian bank accounts without board approval.

(In a cartoonish twist, a Quebec artist's lawsuit alleging that the animation company stole a character he created helped lead to the discovery of financial mismanagement at Cinar.)

The company fired Ms. Charest and Mr. Weinberg, but eventually, 1,900 retail investors in a Montreal hedge fund were left out of pocket for at least $159-million in Canada.

Personal tragedy struck when Ms. Charest died in April, 2004, at age 51 after complications from plastic surgery.

The missing Cinar money had gone into a hedge fund called Norshield Asset Management, which collapsed into bankruptcy in 2005 when Norshield investors became worried about the Cinar exposure.

The case dragged on for years and took many twists, including allegations Mr. Xanthoudakis took more than $200-million. Last year, the Ontario Securities Commission ordered Mr. Xanthoudakis and former Norshield president Dale Smith to pay $2-million each for breaches of the Ontario Securities Act, plus an additional $125,000 each for misleading staff during the investigation of the fund's collapse.

The SQ says it has been on the trail of the case, which many thought was dormant, since 2003.

"Economic crimes are always a long-haul," said SQ spokesperson Richard Gagne, noting that investigators had to sift through "tens of thousands of documents" and interview more than 50 witnesses, many of them outside of Quebec.

The SQ says only one of the three men they are still hunting for - they would not say which one - may be in Quebec. The two others, they suspect, are in the Bahamas and the United States.

with a report from Paul Waldie 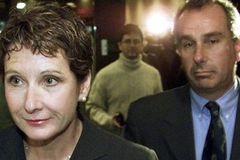 CEO EGO / corporate fraud: the missing warning sign
April 30, 2018
Follow us on Twitter @globeandmail Opens in a new window
Report an error Editorial code of conduct
Due to technical reasons, we have temporarily removed commenting from our articles. We hope to have this fixed soon. Thank you for your patience. If you are looking to give feedback on our new site, please send it along to feedback@globeandmail.com. If you want to write a letter to the editor, please forward to letters@globeandmail.com.
Comments are closed