Cliff Chadderton lost part of himself on the battlefield, but found a calling.

A veteran of the Allied D-Day landing in Europe, Mr. Chadderton, at age 25, commanded a company of the Royal Winnipeg Rifles battling for the Scheldt estuary in Belgium and the Netherlands. By this time in the European theatre – the autumn of 1944 – it had become urgent for the Allies to clear both banks of the Scheldt waterway to open the port of Antwerp to Allied shipping.

By Nov. 8, the Allies had finally cleared the port areas, at a cost of nearly 13,000 casualties, half of them Canadians. Young Lieutenant Chadderton was lucky. At the Leopold Canal, an enemy grenade sent chunks of shrapnel in all directions but took only half of his right leg, below the knee.

Sitting in a slit trench alongside the regimental padre, "I saw a German up above drop a grenade on me," he recounted in his dictated memoirs, Up Close and Personal.

"And that's all I remembered."

As he recounted in Faces of War, a collection of veterans' reminiscences, "I should have died right there," adding, with a grin, "hell, I stepped one foot into Holland, and left it there."

For him, the war was over, "and I must say in all honesty that it was a feeling of great relief to realize that my role was over. But, thank God, I didn't get it on D-Day. I had my four months in and that was fine. I figured I had done what I was paid to do, I guess."

Back home, after several operations, he was fitted with a clunky steel prosthetic, standard for the time, but still "pretty primitive," noted his stepdaughter, Sandra Richmond. But Mr. Chadderton saw it another way. "I divided my body into parts," he recounted. "I don't need my legs, really. I need my head and my head was okay. So with the head, I could go out and challenge the world and find something to do that would be useful."

Believing strongly that amputees can help each other as no one else, he joined the War Amps, an outfit founded in 1918 by amputee veterans returning home from the First World War. By 1965, Mr. Chadderton was executive secretary, and he led the organization as chief executive officer until 2009.

Known to Canadians as "Mr. Veteran," he was a visible presence in television ads and at Remembrance Day observances. As the War Amps tribute noted, he was this country's most influential developer of programs and services for war, civilian and child amputees, and a tireless advocate for veterans.

He was most proud of his work on behalf of children. Mr. Chadderton founded the internationally renowned Child Amputee Program (CHAMP), which assists thousands of amputee children across Canada with the cost of artificial limbs and education, and provides counselling and regional seminars. He also established Playsafe to promote child safety; Matching Mothers, which brings together new and experienced CHAMP families for advice and support; and Jumpstart, which helps multiple-amputee children learn computer skills.

He was also chairman and, at the time of his death, honorary chairman of the 60-member National Council of Veteran Associations. He played key roles in several pieces of legislation that sought to improve the lives of war veterans.

"Canada has lost a great man," said a statement from Prime Minister Stephen Harper's office, "but his legacy will live on in the many people whose lives he has touched."

Mr. Chadderton was a "truly great Canadian," Veterans Affairs Minister Julian Fantino said in a statement. "We have lost not only a friend of the veterans' community, but a strong advocate for those who have served and sacrificed."

Mr. Chadderton died of pneumonia at an Ottawa veterans' health centre on Nov. 30. He was 94.

He was born Hugh Clifford Chadderton in May, 1919, in Fort William (later Thunder Bay), to William Chadderton, a war veteran and entrepreneur of Welsh stock, and Gladys Blackburn. The family moved to Winnipeg and in a short time, lived in seven different homes, as best Mr. Chadderton could remember.

Journalism and hockey were his first loves. While attending the University of Manitoba, he worked part-time in reporting and editing jobs at The Canadian Press and the Winnipeg Free Press, and played for the Winnipeg Rangers hockey team – the farm team for the New York Rangers (his family says he played one game in the NHL).

He enlisted in October, 1939, but as a player for the military's Royal Winnipeg Rifles hockey squad. "I didn't join as a military guy at all," he explained. "I had been playing, and that's really why I got into the army, but it wasn't for military reasons at all."

Even so, when British Prime Minister Neville Chamberlain uttered his famous "Peace in our Time" speech in 1938, young Cliff Chadderton recalled: "I said the equivalent of 'BS.' I just didn't believe that."

After Mr. Chadderton was pressed into active service, his father, who had been gassed at Vimy Ridge during the First World War and later died at the age of 50, advised his son: "Look, this is what war does to you. It's what it did to me. My life has been shortened so you have to make sure that you get your education."

His mother's charge was succinct: "Do your job, but be careful."

Apart from in his memoirs, which included the initial volume, Excuse Us! Herr Schicklgruber, Mr. Chadderton did not talk about his battlefield memories privately. "He didn't go into a lot about the war," said his stepdaughter. "He talked about the historic aspects of it. He was an amazing historian. But the personal part, he kept inside."

His highly successful Never Again video series sensitized Canadians to the horrors of war and "serves as a powerful reminder of the sacrifice made by our veterans," said his Order of Canada citation. The award-winning videos were later repackaged as the Military Heritage documentary series.

In addition to a chestful of war medals, Mr. Chadderton received numerous awards, including the Order of Ontario, induction into the Canada Veterans Hall of Valour and the Terry Fox Hall of Fame; Knight in the Order of the Legion of Honour of France; and the Minister of Veterans Affairs Commendation.

At the War Amps, he proved a whirlwind, advising the ministry of labour on veterans' rehabilitation, and serving as national secretary of the Army Benevolent Fund and as director of the Canadian Army Financial Welfare Program.

For three years, he directed the Woods Committee, formed to conduct an extensive study on veterans' pensions in Canada. The results, contained in three volumes, made 150 recommendations to improve legislation, and, for the first time, made available to veterans a complete and detailed explanation of virtually every section of the Pension Act.

Mr. Chadderton appeared before dozens of tribunals established by Veterans Affairs Canada in the pursuit of pension benefits and allowances for veterans and their families, with particular focus on seriously disabled veterans.

He became an expert in legislation on veterans in Canada and throughout the world, also appearing regularly before parliamentary committees.

In 1987, he established a task force to assist thalidomide victims, and obtained for the War Amps non-governmental organization status at the United Nations with a team of delegates that included John Humphrey, the Canadian author of the Universal Declaration of Human Rights.

For Canadian Second World War veterans who had been taken prisoner by the Japanese in Hong Kong, he won compensation of $24,000 for each surviving PoW or their widow.

Over the decades, Mr. Chadderton also witnessed great advances in prosthetic limbs, from heavy, steel contraptions that sought to equal human capabilities, to super-light titanium devices that strive to surpass them.

"He was proudest of teaching people not to give up," said his stepdaughter. "He was proud of just never giving up on anything." Mr. Chadderton learned to ski at age 66.

Alicia Jarvis, a 30-year-old Toronto resident who was born with short arms, making her a double amputee, encountered Mr. Chadderton through the Jumpstart initiative, from which she got her first computer.

"He was a huge, huge part of my life. He encouraged me and led by example, a true leader, but very humble. He told me I would be a great lawyer one day." Ms. Jarvis said Mr. Chadderton was almost right: She has completed a degree in criminology.

In his memoirs, Mr. Chadderton said he was satisfied with his life.

He leaves his wife, Nina, sons, Bill and Brian, stepson, Gleb, stepdaughter, Sandy, as well as several grandchildren and great-grandchildren. A celebration of his life is planned for the spring. 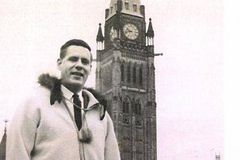 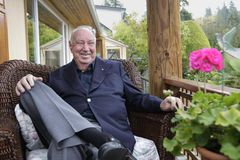 Judge Joan Lax made her mark in male-dominated world
December 13, 2013 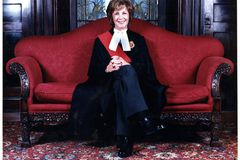