A former construction boss has delivered groundbreaking testimony about a system of corruption in the industry that forced him to pay Canada's most powerful Mafia family a 2.5-per-cent cut on public contracts.

Lino Zambito told Quebec's corruption inquiry about a cartel-like operation lording over the construction industry in the province and he said he had to participate.

He described a system that drove up the cost of public works during his testimony Thursday.

Only certain companies were allowed to bid for public contracts, he said. They would set their prices artificially high. They reached a group decision on who would submit the lowest bid. Then they took turns winning contracts, he said.

And when it was all said and done, he said, the Cosa Nostra claimed a percentage.

Mr. Zambito said that, as far as his own company was concerned, that fee was a 2.5-per-cent share of the value of a sewer project paid to the Rizzuto family.

The burly 43-year-old businessman shrugged off a suggestion from an inquiry lawyer that he was paying protection money.

"I saw it as more of a business. Entrepreneurs made money and there was a certain amount owed to people of," he said and, pausing before he added, "the Mafia."

Mr. Zambito said he knew where the money – delivered through a middleman – wound up.

Mr. Zambito said his family knew the Rizzutos from the old country and said they were part of the same tight-knit community whose members helped each other out as newcomers to Canada.

His testimony shed light on allegations made three years ago in media reports that triggered demands for the inquiry, which is probing links between the underworld, the construction industry and political parties.

Mr. Zambito is the first person to describe, in such detail and so publicly, his own involvement in construction-related wrongdoing.

According to a police officer who testified at the Quebec inquiry, the Mafia has imposed a so-called "tax" of up to 30 per cent on the construction industry in the province.

The investigator testified this week that the system exists to this day – although he says the Mafia is claiming a smaller cut lately.

The inquiry heard earlier Thursday that representatives of more than six-dozen construction companies visited a Mafia hangout several years ago while the RCMP was watching.

Officers jotted down licence plates outside a Sicilian Mafia hangout on numerous occasions, including a 2005 Christmas party.

An investigator for the Charbonneau inquiry testified that his team cross-referenced those plates and tied the vehicles to 74 construction companies.

He pointed out that some entrepreneurs owned multiple companies. But the investigator, Eric Vecchio, noted that a good number of companies that received public-works contracts in Montreal, for things like excavation and sewers, were represented at that party.

For instance, he said, six out of 10 companies that received contracts for sewer work were seen at the now-closed "social club."

Later in the day, when he was on the witness stand, Mr. Zambito rattled off the names of companies he said were involved in price fixing. But he said the system had existed for years and was established by the companies, not the Mafia.

"When I got into the business, the system already existed, I can't tell you how long it had existed but there was a system in place and there were rules of the game that were well established," he said.

He said the rules were made clear to him when he entered the business around 1999 and bid for a project nearly at cost price.

He said he was informed that the other entrepreneurs weren't pleased and they told him – through a city engineer – that if he wanted to work, he'd have to play by the rules.

"If you didn't follow the rules, you didn't work in Montreal," he said. "You can go work elsewhere."

He added that the same cartel system existed at the municipal and provincial levels.

He said there were fake-billing schemes for services that weren't used or needed. For example, Mr. Zambito said a company he'd lease trucks from each day would agree to be billed for vehicles that weren't used. The extra money would be funnelled to Mr. Zambito, minus a cut for the other company.

On Thursday, Montreal's mayor called a news conference where he expressed outrage over the revelations trickling out at the Charbonneau inquiry.

"As a citizen, as the mayor of Montreal, I was deeply angered," Gerald Tremblay said.

He demanded that the provincial legislature convene immediately, several weeks ahead of schedule, for an emergency session to toughen contracting laws so that the city can legally bar certain companies from public bids.

Tremblay has also asked for an administrative review into a former city employee who happened to be the daughter of a construction boss seen in police surveillance video taking cash from Zambito, and later giving it to top members of the Mafia.

This week the Charbonneau inquiry saw old videos of construction figures handing over money to the now-deceased Nicolo Rizzuto, the one-time head of the Sicilian Mafia in Canada.

The videos and evidence were amassed during Operation Colisee, a five-year investigation that culminated in mass arrests in 2006 in the largest sweep against the Italian Mafia in Canadian history.

But because construction wasn't part of the RCMP investigation, which centred on drugs and illegal gambling, officers either shelved evidence or even turned off surveillance microphones while mobsters were talking to construction bosses.

The inquiry head, France Charbonneau, explained on Thursday that the RCMP decision was a legal issue. She said that, in Canada, police investigators cannot listen to conversations involving people not specifically targeted in a wiretap investigation.

The RCMP lost a court battle to avoid sharing the material with the Charbonneau inquiry.

During a news conference Thursday, Public Safety Minister Vic Toews wouldn't comment on why the RCMP was unwilling to tell other levels of police about its information.

"All I can say is that police officers are trained and sworn to uphold the law and they will do so to the best of their ability – if not they will be accountable to their superiors and to the community in general," he said. 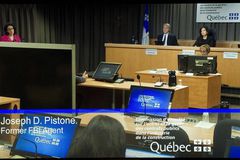