Growing up in Jacksonville, Fla., Rhonda Britton experienced occasional moments of racism. As the only black girl in her junior-high class, she was once told by a white friend that she wasn’t allowed to come over and play.

But it was when she moved to Canada as an adult that she felt racism more overtly: In 2011, she discovered a historic plaque in front of her church in Halifax spray painted with the words: Fuck All Niggers.

It was a shock, and not the only one: She’d expected Canadians would be kinder and more welcoming than Americans.

Colour Code Episode 4: We often compare ourselves to the United States where race relations are often dramatic and sometimes violent, but does that mean we're less racist in Canada?

But in Nova Scotia, where a large, historic black community has long faced racial discrimination, racist acts are both subtle and blatant.

She also found that Canadian kids didn’t learn as much about black history in schools as Americans; that news articles with black subjects were often filled with hateful online comments; and that racial profiling is common, particularly in the retail sector – in one instance, she recalls a security guard following her around a drug store while white customers faced no such scrutiny.

In her 14 years in Canada, she has been surprised not by the differences in racial tensions in the two countries, but at the parallels – even if Canadians may be reticent about acknowledging it.

“Things are more similar than we think. They have not erupted to the volume that they have in the U.S. … but I am seeing signs of things coming to a boiling point,” says Dr. Britton, who has been a pastor at the Cornwallis Street Baptist Church in Halifax since 2007. “If we want to avoid that, we need to address some of these things – we can’t continue to sweep them under the rug.”

Lifting up that rug is the aim of this month’s Globe and Mail series Colour Code, which is delving into race in Canada through a series of podcasts and articles.

It comes as events south of the border – including all-too-frequent shootings of unarmed black men and ensuing protests, along with a presidential candidate many have deemed a racist – are forcing Canadians to re-examine their own notions of race and racism. 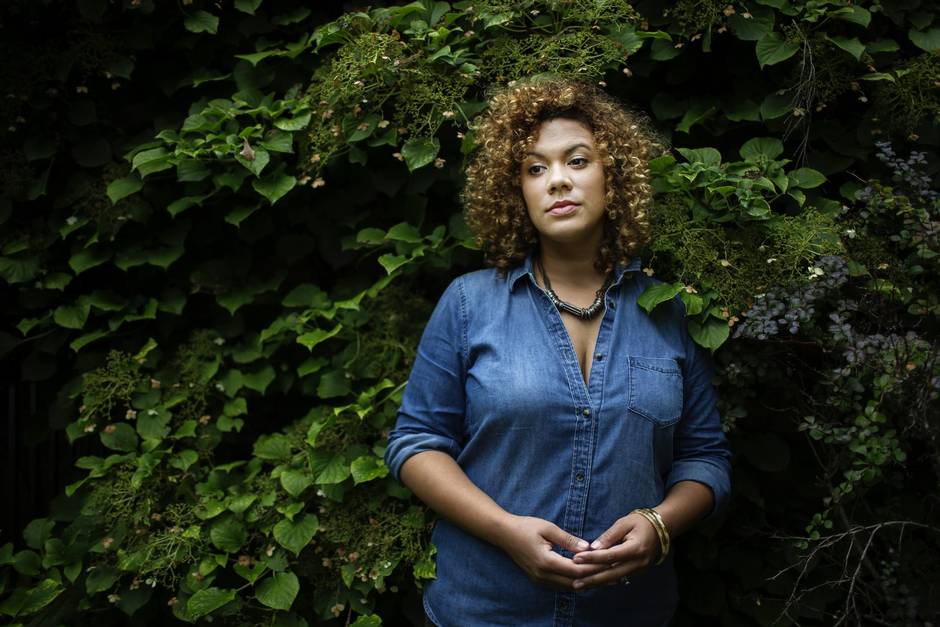 Nova Browning Rutherford, who is half black and half white, and has lived in Ontario, Alberta and Los Angeles, poses for a photo at her home in Mississauga, Ont. on Friday. (Michelle Siu for The Globe and Mail)

A common national narrative holds Canada up as a country of multiculturalism and inclusiveness. But a recent survey, commissioned for The Globe and conducted by Nanos Research this year, suggests the narrative has cracks.

Seven in ten respondents said there is still “a lot of racism” in Canada. One in five have had racist remarks directed at them. And more than a third said they have made a racist remark in the company of others.

The poll, conducted in April and May of this year, has a silver lining: Eight in 10 Canadians believe it’s possible to educate people to make them less racist in their attitudes.

Like Dr. Britton, Nova Browning Rutherford has lived in both countries. She was born in Chatham, Ont., to a black father and white mother, and raised in Edmonton and London, Ont., before spending five years in Los Angeles.

She says that a big difference in the U.S. is the separation of people based on race or ethnicity. She often felt pigeonholed. “Black people don’t do that,” she was told when she’d mention to colleagues she was going hiking, or out to a Korean restaurant.

She feels relieved to now live in Toronto. But any notion that Canada is morally superior vanishes when she thinks of the deep disparities in living conditions of indigenous peoples.

“No running water for 20 years, that’s racism,” she says. “I can’t go to the States with this arrogant, ‘We’re Canadian, we’re not like that,’ when it’s worse. And we don’t even know about it.”

Ms. Browning Rutherford, who is a personal development coach, found race in the U.S. is openly discussed at work and in social circles. But Canadians lack outlets for intense conversations about race. “It does feel that our nature [in Canada] is to be reserved and quiet, and just happy to be here, and we don’t want to make any waves. But if we want it to be better, we have to get a little uncomfortable.” 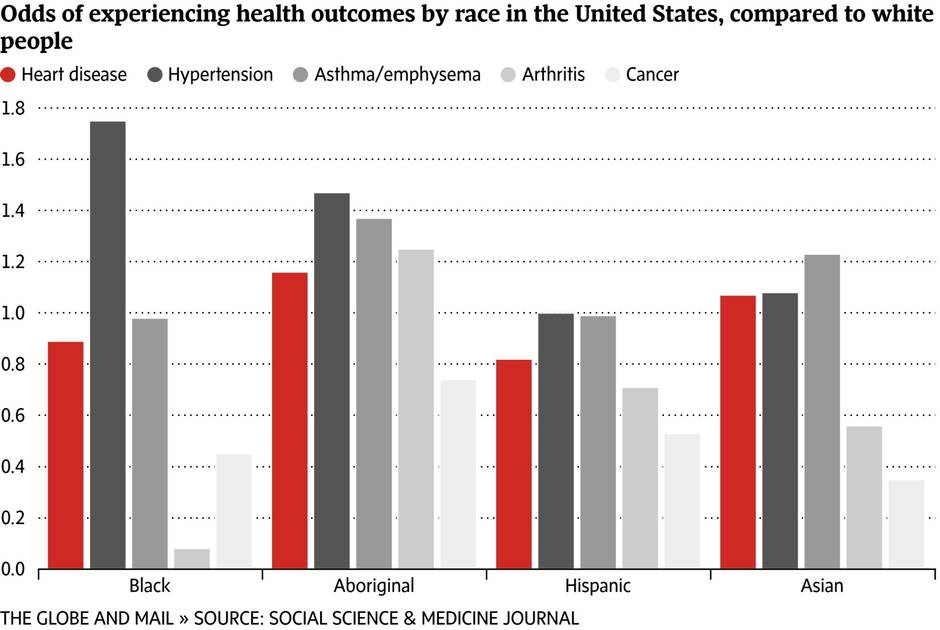 What we don’t know

Part of the problem is that it’s hard to figure out, with much precision, what’s going on. Unlike the United States, where race-related data is routinely collected on everything from jobless rates to university-graduation rates, Canada “cannot tell its own story,” says Arjumand Siddiqi, associate professor at the University of Toronto’s Dalla Lana School of Public Health, who has lived and worked in both countries.

She hit a wall in 2007, when she wanted to test if race-based health inequalities varied in different societies. Most of the research at the time relied on U.S. data.

While working at the University of North Carolina, she began to analyze a joint Canada/U.S. survey of health. When she accessed the data from Canada, however, detail on race was suppressed (for privacy reasons, she was told). All she could glean was information on people who were “white” or “non-white.” She couldn’t determine whether health outcomes within racial groups varied.

“We’re left with a muddy picture. We are left not knowing whether there is a problem that is specific, widespread, changing over time, whether we need to be doing more or less with some groups.”

Health care could use more accurate information. One paper last year that looked at ethnicity and breast cancer noted that data about race or ethnicity “are rarely collected” in a systematic manner in Canada’s health-care settings.

That data deficiency “certainly does not mean that ethnoracial inequalities do not exist in Canada; indeed, lack of data often limits the ability to accurately and adequately identify health inequalities and inequities,” wrote Dr. Aisha Lofters of the University of Toronto.

In Halifax, Dr. Britton, who has four degrees, including a doctorate, has found that a dearth of data on African Nova Scotians has hurt efforts to push for racial equity in the province. “With no data being collected, what does that mean? No funding” to address specific health issues in communities. 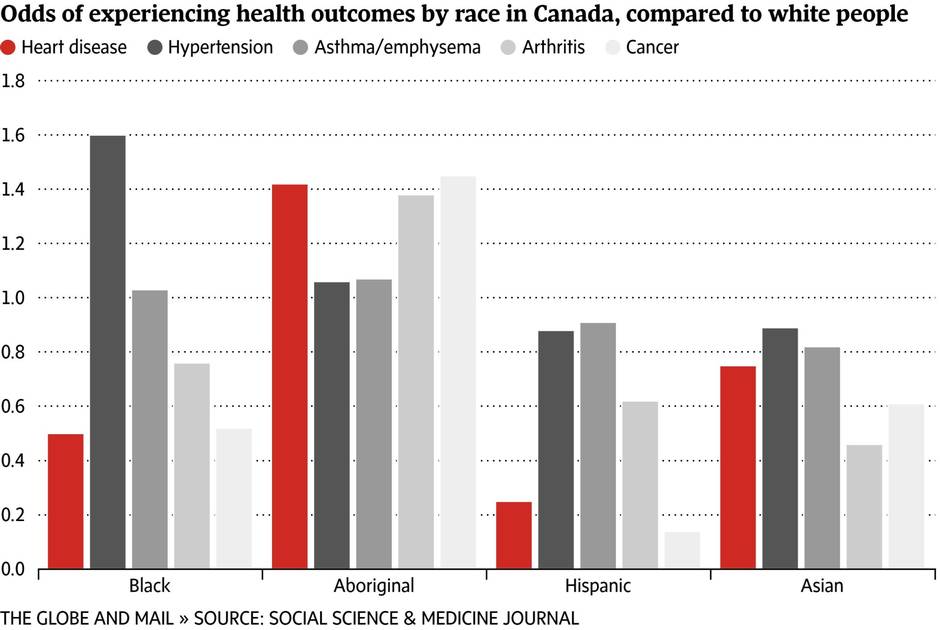 One missing piece of the puzzle is jobless stats on indigenous reserves, which the government doesn’t collect on a monthly or even yearly basis. Another piece is about wages. A widely reported study released last week in the U.S. – which found the wage gap between white and black Americans is worse today than in 1979 – isn’t currently possible to conduct in Canada, says Sheila Block, senior economist at the Canadian Centre for Policy Alternatives.

In the justice system, data is lacking on the ethnicity of homicide victims and fatalities from police encounters.

People are often grouped as “visible minorities,” in the justice system. The catch-all term is “problematic,” noted U of T’s Akwasi Owusu-Bempah in a 2011 report entitled Whitewashing Criminal Justice in Canada. Lumping people together “obscures racial differences by averaging groups that are overrepresented with those that are underrepresented.”

The absence of detailed data may be hiding inequalities that, ultimately, harm police effectiveness and hurt community relations, he said.

What we do know

The evidence that does exist suggests Canada has challenges of its own.

Biases persist in Canadian workplaces. In one field experiment, published in 2011, University of Toronto researchers Philip Oreopoulos and Diane Dechief sent almost 8,000 résumés to employers in Canada’s three largest cities, from applicants with either anglophone or foreign-sounding names. They found that job seekers with names like Matthew Wilson were 35 per cent more likely to get a callback than those with a name like Samir Sharma – regardless of work experience, education or language proficiency.

Health disparities persist, in both countries. In a study published this year, Prof. Siddiqi and a team found racial inequalities exist in health outcomes (such as heart attacks, hypertension and obesity) in Canada and the U.S. The magnitudes differ though – the gap between blacks and whites is greater in the U.S. than in Canada. However, the indigenous-white disparity is larger in Canada than in the U.S. 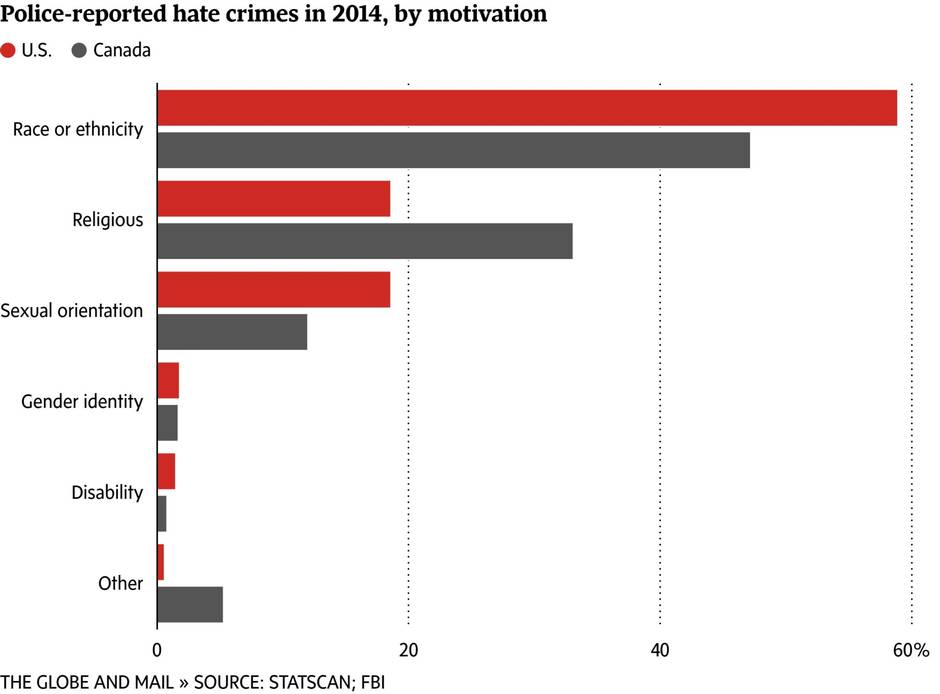 Forty-seven per cent of hate crimes were racially motivated in both countries. In Canada, blacks and Arabs were most frequently targeted and the types of crimes ranged from threatening phone calls and public incitement of hatred, to harassment and assault.

In Canada, as in the United States, problems in policing are thorny issues. In July, the RCMP pulled over and questioned a black man in Bathurst, N.B., after they received calls about a “suspicious man.” He had, in fact, just been reading a book.

In the same month, Abdirahman Abdi, a Somali-Canadian man, died in Ottawa after a confrontation with police. The problems go beyond just one or two incidents.

Canadian civil-rights leaders should not be forgotten. Children in both countries are well aware of American legends Martin Luther King Jr. and Rosa Parks. But what about Canadian trailblazers such as Viola Desmond or Mary Two-Axe Earley? Schools can foster a deeper sense of Canadian history and the effects of colonization by teaching such stories.

Tackling racial discrimination also requires acknowledging there’s a problem in the first place, says Anthony Stewart, an English professor at Bucknell University in Lewisburg, Pa., who is Canadian and the author of Visitor: My Life in Canada.

Prof. Stewart has had a successful career in academia. But as a black man, he spent a lifetime dealing with grinding, day-to-day racism in Canada.

Champions on both sides of the border

Virtually every child in America is familiar with civil rights activists Martin Luther King Jr. and Rosa Parks. Most Canadian kids know about them, too. But what about Canada’s own champions of equal rights and the impact they have had on the country? Here’s a look at three influential leaders on both sides of the border. 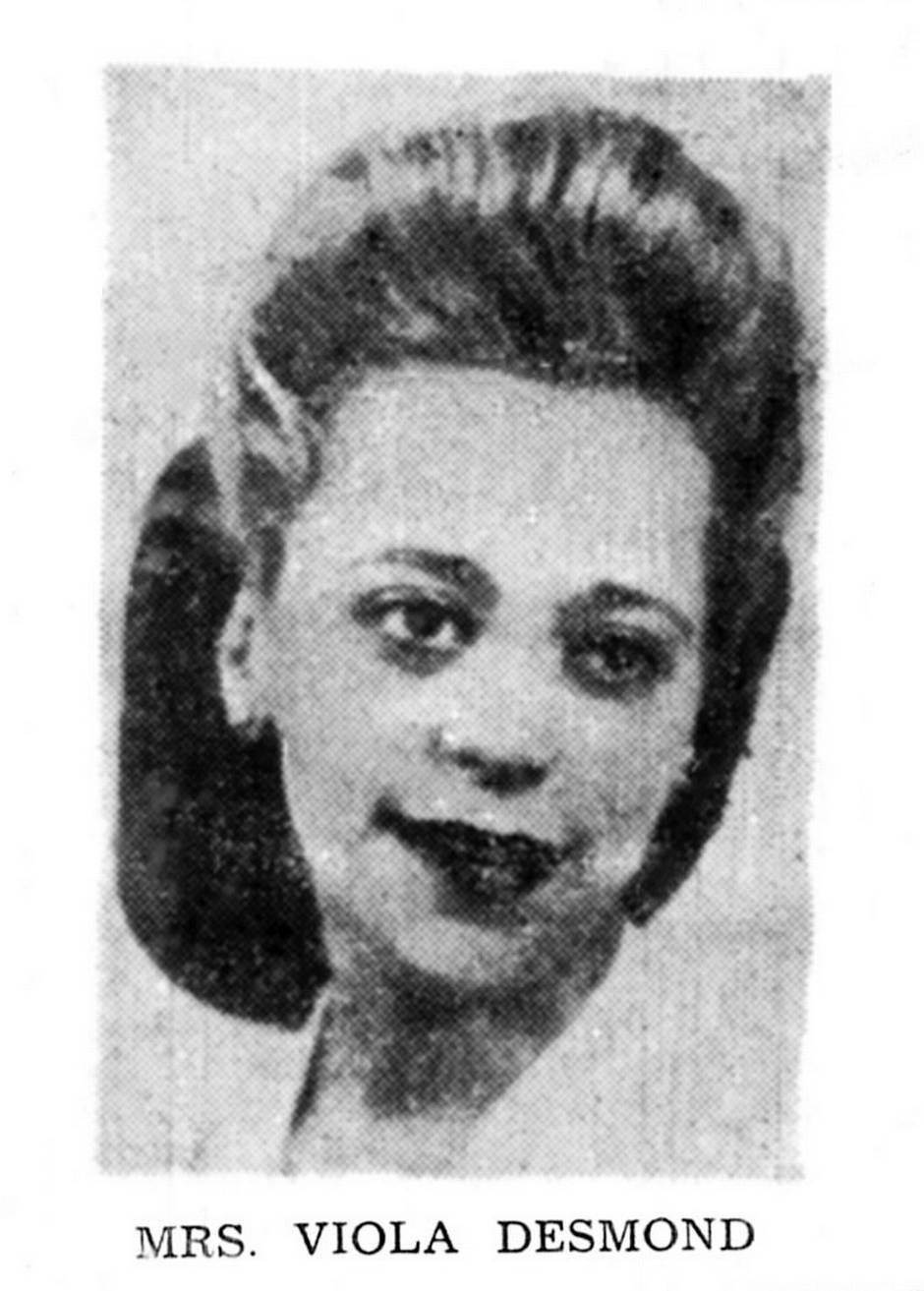 Viola Desmond has been dubbed Canada’s Rosa Parks – only her act of resistance took place nine years earlier, in 1946. Police dragged her from a movie theatre in Nova Scotia and put her in jail overnight after she refused to leave the whites-only section. Her courageous stance against racism and segregation was important to Nova Scotia’s civil-rights movement. 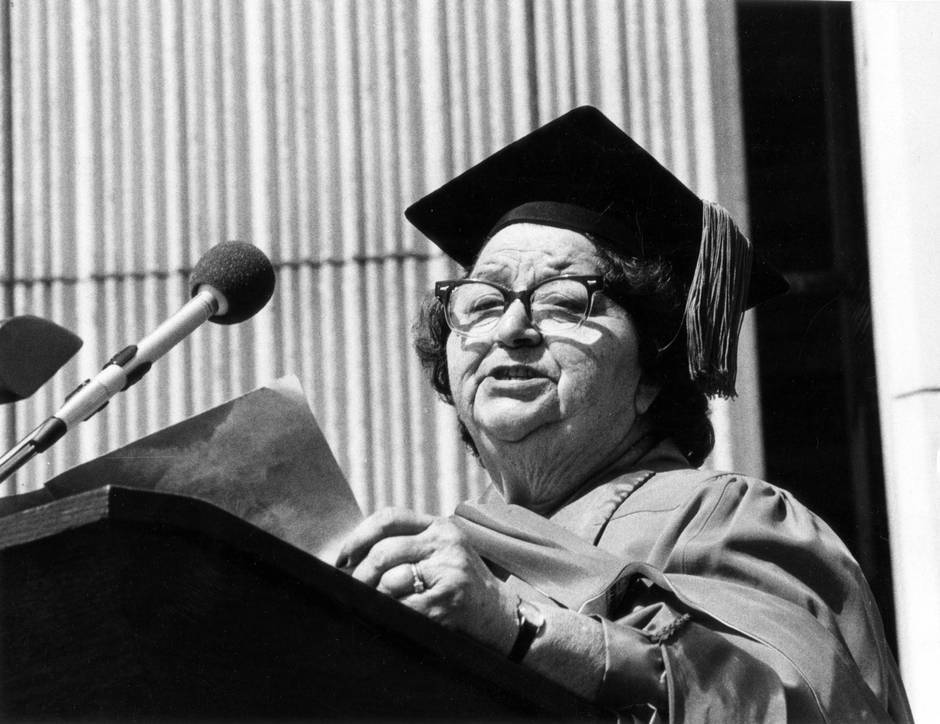 Mary Two-Axe Earley was born on a Mohawk reserve in Kahnawake, Que. She championed equal rights for indigenous women and spent decades standing up for women who had been denied “Indian” status if they married non-Aboriginal men. The discriminatory Indian Act was changed in 1985, affecting the lives of thousands. 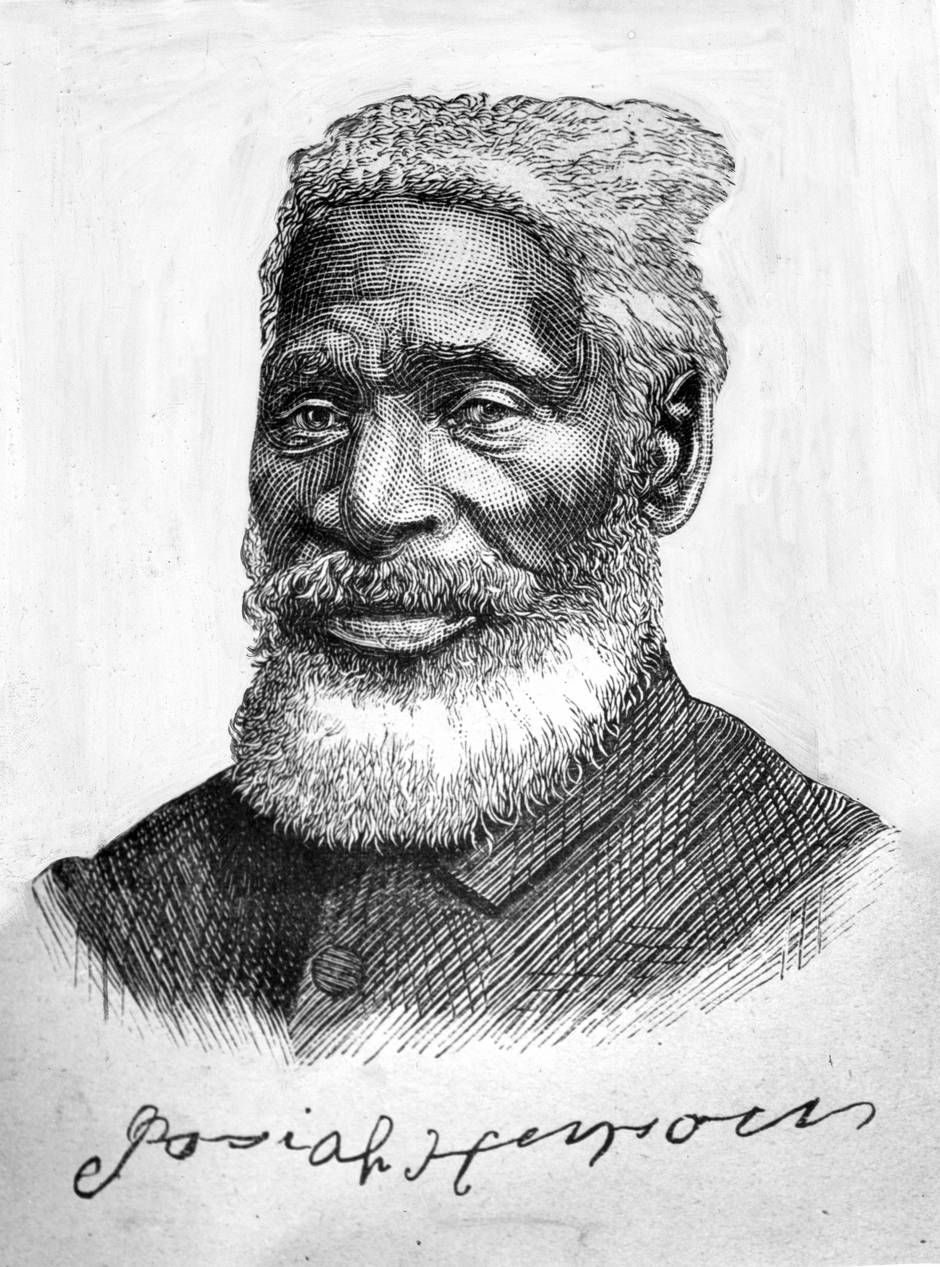 Born in slavery in Maryland, Josiah Henson escaped to Canada in 1830 with his wife and family, settling in Dresden, Ont. He was involved in the Underground Railroad, leading nearly 200 slaves to freedom. His story served as inspiration for the novel Uncle Tom’s Cabin. – Tavia Grant 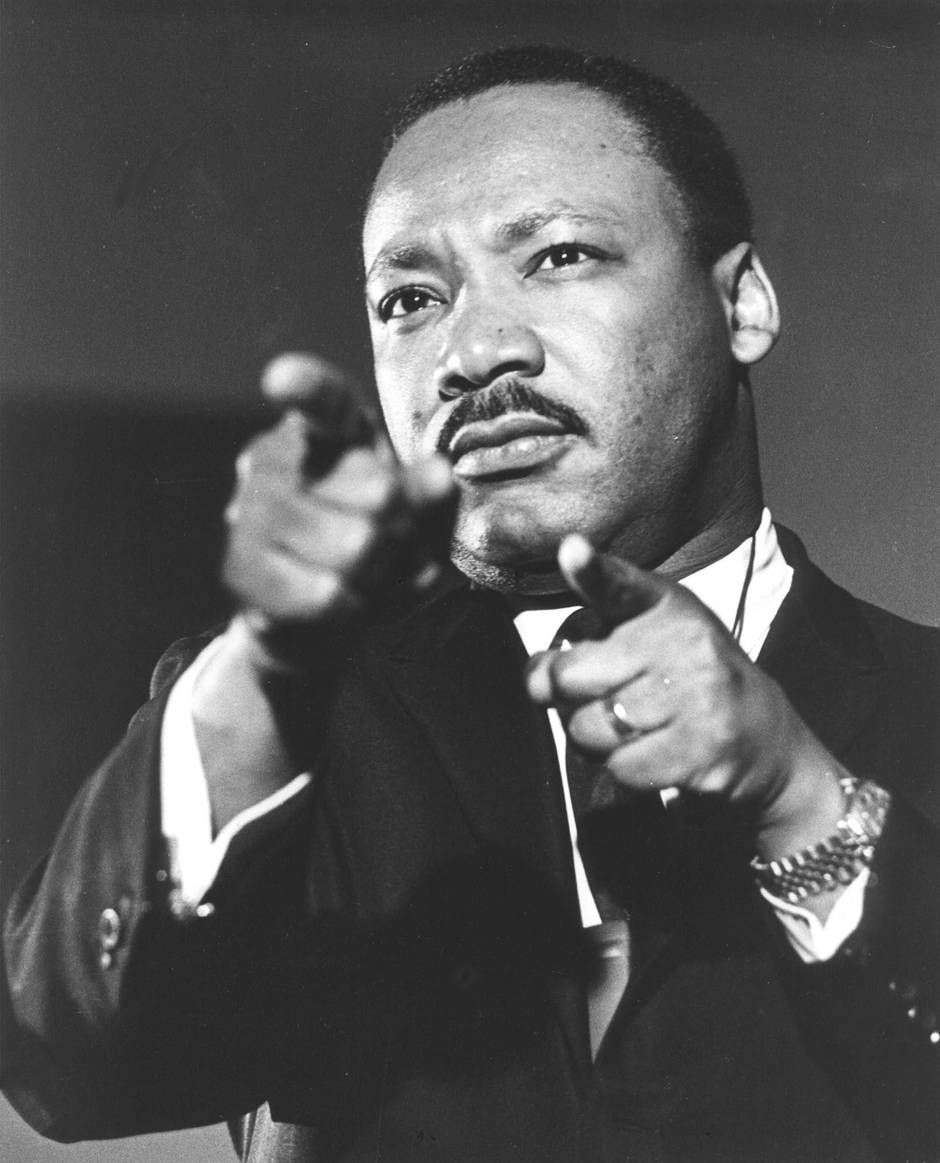 Martin Luther King Jr. was a Baptist minister who led the U.S. civil-rights movement from the 1950s until his assassination in 1968. He played a crucial role in ending the segregation of African-Americans. He won the Nobel Peace Prize in 1964 and is still widely cited for his I Have a Dream speech. 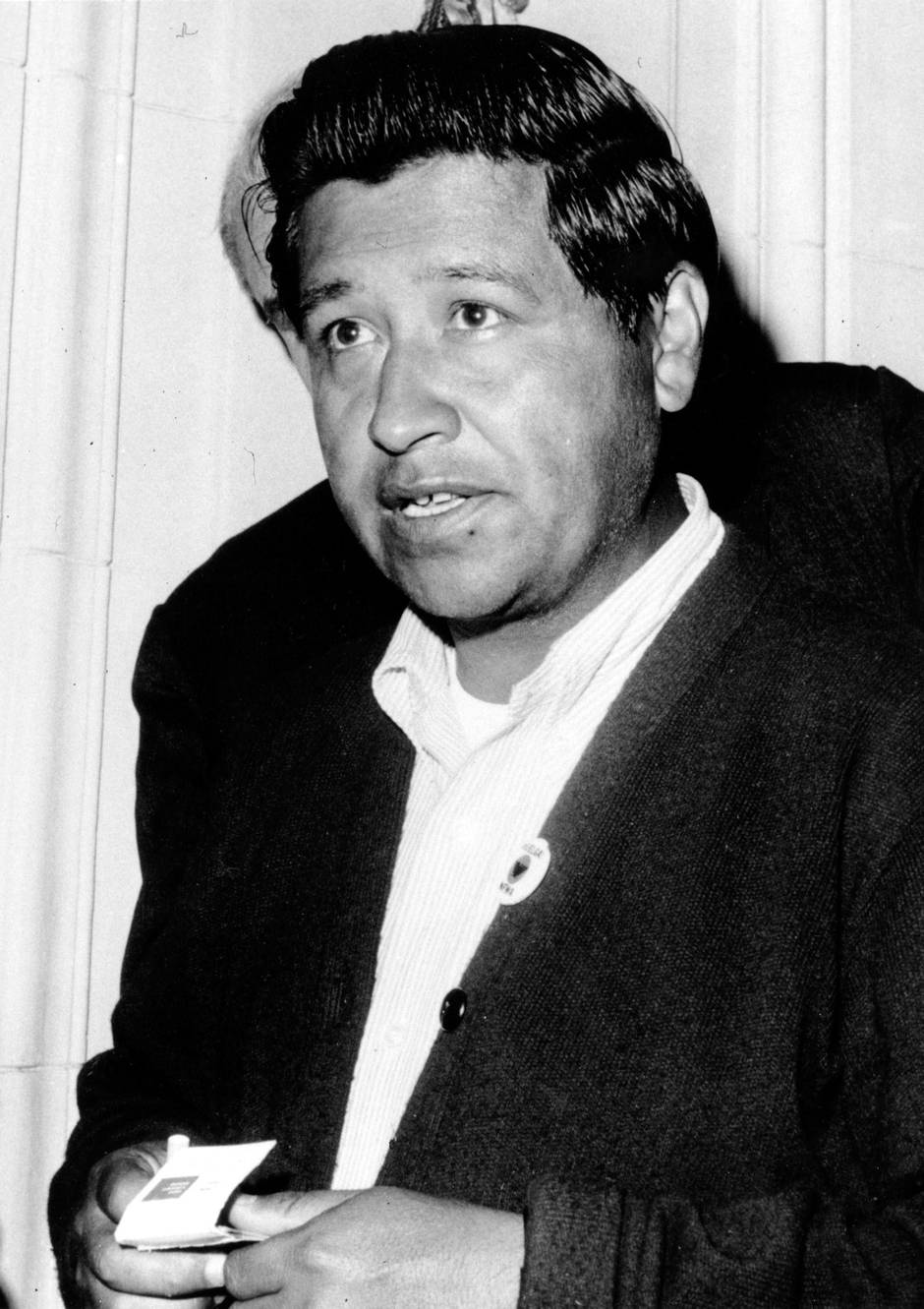 Cesar Chavez was a Mexican-American union leader and labour organizer who worked to improve the treatment, pay and working conditions of farm workers. He used non-violent means, such as boycotts, marches and hunger strikes, to raise awareness about the plight of migrant workers. 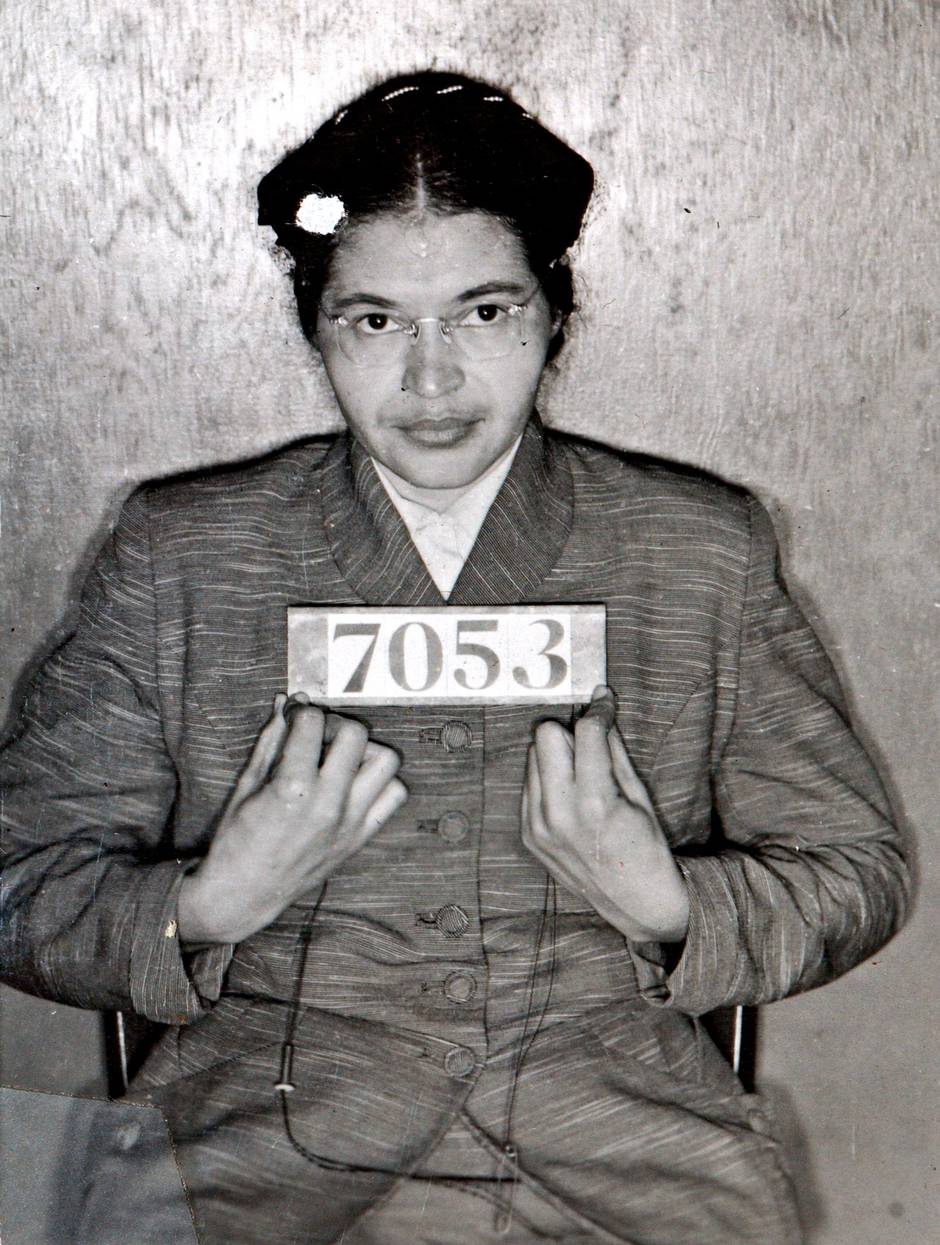 Rosa Parks’s refusal to give up her seat on the bus for a white passenger in Montgomery, Ala., spurred boycotts, protests, arrests – and nationwide efforts to end segregation of public facilities. She is known as the “mother of the modern-day civil rights movement.”