The Cree have finally won the "siege" of Fort Battleford - 125 years after the battle was fought.

Parks Canada has agreed to stop using the word "siege" in its posters and programming to describe the sometimes violent, sometimes tragic events at the frontier community during the Northwest Rebellion. An aboriginal historian had pointed out that while settlers gathered in the fort in fear, no attack ever came and there was no siege.

"We don't want to use any wordings that could give people the wrong idea," said Mark Calette, Parks Canada's supervisor of historic sites in southern Saskatchewan.

For years, Parks Canada has re-enacted the fort's role in the Northwest Rebellion and advertised the confrontation on posters and other material as the "Siege of Fort Battleford."

In the spring of 1885, the region of what eventually became Saskatchewan was in turmoil as Metis and some Cree led by Louis Riel fought what they saw as settlers encroaching on their lands. By the end of March, whites had been killed at Duck Lake and Frog Lake and rumours were spreading like a prairie fire that the Cree from Chief Poundmaker's band were massing to join the revolt.

Terrified, hundreds of people from the town of Battleford poured into the North West Mounted Police fort. Civilians were armed to add to the detachment of 25 Mounties and the fort's stockade was beefed up for the attack that settlers were sure was coming.

On March 30, the Cree did come. But no attack followed.

Chief Poundmaker asked to meet with the Indian agent, but his request was denied. For the next three weeks, 500 settlers and townspeople cowered inside the tiny fort while Cree roamed the town. They looted and burned several homes and emptied the Hudson's Bay depot.

Occasional shots were fired. A policeman was killed.

But the fort was never attacked or surrounded and its surrender was never demanded. In fact, Chief Poundmaker was there to ask for supplies promised to his hungry people and to reassure the Mounties that he had no plans to join Riel.

Many settlers left accounts of their experience. One of the West's first reporters, P.G. Laurie, filed regular dispatches from inside the stockade.

Parks Canada has used that material to create 15 vignettes acted out to convey the settler's isolation and fear.

But Tyrone Tootoosis, a member of the Poundmaker band, finally tired of promotional ads saying, "Follow townsfolk and settlers as they seek shelter in the Mounted Police fort to wait out the Siege of Battleford." He objected.

Mr. Calette acknowledged he had a point.

"The only reason the word siege is used is that that's what the people inside the fort were feeling. That's kind of over the years how that story's been told."

Mr. Tootoosis said it was about time the word was deleted.

"At least it'll stop feeding that fear," he said.

Mr. Calette has asked Mr. Tootoosis to co-ordinate the involvement of area aboriginals in bringing their side of the story into future programming.

"One hundred and twenty-five years later, they're coming to us and asking, 'What happened here?' " Mr. Tootoosis said. The answer from an aboriginal perspective can be supplied because local bands have kept careful oral history of the event over three generations.

Mr. Calette said the debate will only improve re-enactments at the site.

"We see this as being a really positive step forward in improving that program." 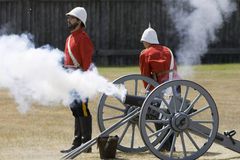