Dry conditions are contributing to the spread of a fire in southeast Manitoba that blackened almost 200 square kilometres and was perilously close to two communities on Saturday.

The area is typically wet in October but not this year, said Duane Boutang, Reeve of the Rural Municipality of Piney.

"We had a lot of moisture over the winter, and in the spring. And then it's like the tap got turned off in June," he said in a phone interview from the municipality's emergency operations centre in Vita.

"It's overcast now, but it doesn't look like it's going to rain."

Coupled with strong southerly winds that reached 90 kilometres per hour on Friday, it's made the blazes burning in the region extremely tough for crews to fight.

Two villages in the municipality, Sandilands and Woodridge, were under evacuation orders on Saturday.

Mike Purtill with the Manitoba fire commissioner's office says crews have used heavy equipment to clear brush and prevent the blaze from jumping a highway and reaching Sandilands, where the fire has burned only a couple of kilometres away from the village.

Up to 400 people have been moved from the area. They're staying with friends and family, or have gone to hotels in Winnipeg.

There was good news for residents living in evacuated communities in the neighbouring Rural Municipality of Stuartburn on Saturday when they were allowed to return home after several separate fires, including the large one near Sandilands and Woodridge, threatened the area on Friday.

Mr. Purtill said the strong winds from Friday had dropped to about 30 km/h on Saturday, and a westerly flow of air was also bringing lower temperatures and higher humidity.

But he said no rain is forecast for the region until the middle of next week.

"It's hard to believe, but we've been dealing with a flood for the better part of spring and the summer. We still have high water," Mr. Purtill said.

"But we've had virtually no rain in southern Manitoba all summer." he added.

Mr. Purtill said there likely haven't been any major fires in the region until now because there hasn't been any severe weather, meaning there haven't been blazes sparked by lightning strikes. He said the cause of the fires isn't yet known, but speculated an ATV or a spark from power lines blowing in the wind may be responsible.

Fires burned in two other parts of Manitoba on Saturday. One was in an area popular with cottagers northeast of Winnipeg. The blaze burned 180 square kilometres and was about six kilometres from Bissett, Man. on Saturday.

The other was in Riding Mountain National Park in western Manitoba, which the province says began when Parks Canada was conducting a controlled burn that became out-of-control.

The Manitoba government says eight firefighters from Ontario and 21 from B.C. were helping to battle the blaze near Bissett.

Numerous highways in the Manitoba are closed. An eastbound section of the Trans-Canada Highway were also reduced to one lane due to the fire east of Winnipeg.

"We have ground crews that are doing structure protection and we have air support in the sky being the big eye and giving us the overall picture and showing us where we need to be, and what our values of threat are," Mr. Purtill said. 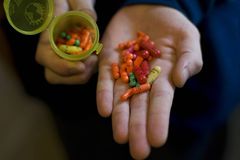