A Crown lawyer says the judge who used an outdated section of the Criminal Code in a murder verdict can fix the mistake – and one option would be finding Travis Vader guilty of manslaughter instead.

The couple, in their late 70s, disappeared after setting out from their Edmonton-area home to go camping in British Columbia in 2010.

Their bodies have never been found.

In finding Vader guilty, Thomas said Vader was a desperate drug addict who came across the couple in their motorhome and shot them during a robbery.

But the judge used Section 230 of the Criminal Code, which the Supreme Court declared unconstitutional in 1990.

Law experts have said a judge has never before cited the old section in a verdict – and the error is huge.

"The court may address the error," Crown prosecutor Ashley Finlayson said in a brief in response to a defence application for a mistrial in the case.

"A mistrial should be declared only in the clearest of cases ... and the Crown submits that this is not one of them as other remedies are available."

He said the judge could use a different section of the Criminal Code – 229 – and, with more analysis, still find Vader guilty of second-degree murder.

But Thomas could also convict Vader of the lesser and included offence of manslaughter, Finlayson said.

Lawyers are to present oral arguments on the mistrial application in court Monday.

It's not known when Thomas will make a decision.

The McCanns were last seen July 3, 2010, fuelling up their motorhome in their hometown of St. Albert. The burned-out RV and a vehicle they had been towing were discovered west of Edmonton in the days that followed.

Although there was no direct evidence linking Vader to the crime, the trial heard that his DNA and a fingerprint were found in the couple's SUV and that their cellphone was used to call Vader's former girlfriend.

Thomas said in his verdict that he found no evidence Vader intended to kill the seniors and ruled out first-degree murder, saying there was also no evidence the deaths were planned and deliberate.

In its mistrial application, Vader's lawyers said the judge cannot go back and find Vader guilty of second-degree murder on other grounds, and the only solution is a mistrial.

They said a re-determination of the charges and the facts of the case by the judge "would constitute an abuse of process, would tarnish the integrity of the court and would bring the administration of justice into disrepute." 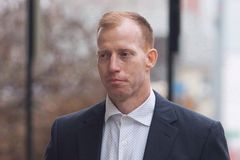 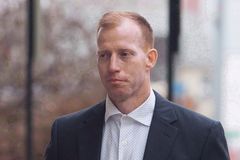