Barely a week after the shootings that took the lives of six worshippers at a Quebec City mosque, the divisive debate over Quebec identity resurfaced in the province and opposition leaders called for rules to limit religious headgear among police officers and other figures.

Even as Quebec's National Assembly held a minute of silence for the six Muslim men killed Jan. 29, the opposition signalled it would not refrain from a discussion that had been fingered as contributing to a climate that many in the Muslim community have described as hostile to them.

The latest debate centres on Bill 62, legislation tabled by the governing Liberals that would ban veiled women from giving or receiving government services. The contentious piece of legislation is before the legislature, which resumed sitting on Tuesday.

Margaret Wente: As we learned in Quebec, no one is safe from extremism

Sheema Khan: The personal politics of wearing a burkini

Opinion: Anti-Muslim hate has been in Canada - and our politics - long before the violence

The opposition Parti Québécois and third-party Coalition Avenir Québec both said Tuesday that the bill does not go far enough, and they are seeking broader restrictions that would prohibit religious wear for figures such as judges, prison guards and police officers.

"It's important to be open to welcoming newcomers, but we must limit the wearing of religious symbols so we can better live together," CAQ leader François Legault said.

Mr. Legault, who called for a ban on the burkini from Quebec beaches last summer, rejected any responsibility for going too far in his comments touching on Muslims. "I think we have always defended what the great majority of Quebeckers want," he told a news conference.

The inflamed debate over the treatment of religious minorities has stoked discomfort in some minority communities in Quebec for years, and there are signs that even in the wake of last month's shooting, the issue is not going away.

Mr. Legault said he wants a religious-headgear ban to apply to schoolteachers, and he would campaign on the topic in next year's provincial election. In exchange, he said, he would drop his wish that the ban be included in Bill 62. "In an ideal world, I wish we would forbid all religious symbols for teachers who teach children," he said.

PQ leader Jean-François Lisée also said he wants Bill 62 to include a religious-symbol ban on judges and police officers, saying that the issue has dragged on for too long. The recommendations to limit headgear among so-called coercive figures had been recommended by academics Gérard Bouchard and Charles Taylor after public hearings in 2007.

While members of the Muslim community say the recurring debate over identity has exacerbated tensions for them, both opposition leaders insisted it's the absence of rules on religious accommodations that has worsened the social climate.

Still, it isn't clear how rules on religious headgear or accommodations would have prevented the mosque shootings. A 27-year-old Quebecker, Alexandre Bissonnette, is charged with six counts of first-degree murder and five counts of attempted murder.

Quebec Premier Philippe Couillard said in the wake of the shootings at the Centre culturel Islamique de Québec in Quebec City that he hoped the opposition would support Bill 62, and that the tone of the debate over identity in Quebec would be respectful. Public figures multiplied expressions of solidarity with the Muslim community and heard calls to tone down rhetoric that had left Muslims feeling stigmatized.

On Tuesday, the Premier took pains to put a distance between the debates over religious symbols and the mosque shootings.

"The horror we experienced last week in Quebec is racism and xenophobia that were pushed to extreme violence," he told reporters in Quebec City. "That is the issue."

Religious headgear among authority figures in Quebec is a non-issue, the Premier said.

"This is an unreal debate … To my knowledge there are no police officers who wear religious symbols in Quebec. We're again undertaking another debate over a situation that is more than hypothetical – it's non-existent."

In fact, officers in Montreal are deviating from their uniforms at the moment in one way: They are wearing colourful camouflage pants as part of a labour dispute. "People who are worried about police uniforms should also worry about that," Mr. Couillard said. 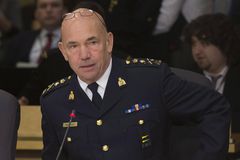 Quebec media, politicians express regret over Islam rhetoric in wake of mosque attack
January 31, 2017
Opinion
As we learned in Quebec, no one is safe from extremism
February 4, 2017
Follow Ingrid Peritz on Twitter @iperitz
Report an error Editorial code of conduct
Due to technical reasons, we have temporarily removed commenting from our articles. We hope to have this fixed soon. Thank you for your patience. If you are looking to give feedback on our new site, please send it along to feedback@globeandmail.com. If you want to write a letter to the editor, please forward to letters@globeandmail.com.
Comments