Citing the risk of wrongful convictions, the Supreme Court has made it easier for people convicted of crimes, up to and including murder, to be set free on bail, while they wait for their appeal to be heard. The decision could affect hundreds of convicted offenders each year across Canada, according to the Criminal Lawyers' Association.

The unanimous ruling Thursday comes in the case of Dennis Oland, who was convicted of second-degree murder in the 2011 bludgeoning death of his father, Richard. Mr. Oland was an "ideal candidate" for bail, the court said, because he had no criminal record, was a "loving/caring man" and was neither a danger to the public nor at risk of fleeing. And yet two levels of court rejected his request for release pending his appeal, saying it would harm public confidence in the justice system.

"I know that, sometimes with cases like this, people might think: 'Oh my god, this means people convicted of murder are going to get released on murder pending appeal,'" said Toronto criminal defence lawyer Michael Lacy, who represented the Criminal Lawyers' Association, an intervenor in the Oland case. "But most people don't obtain bail pending their murder trials, because there's something about the nature of the case or the person's own circumstances which suggests they're not a good candidate for bail."

Eighty-one people convicted of first- or second-degree murder in Canada between 1975 and 2016 applied for bail pending appeal, according to information gathered by the New Brunswick Attorney-General's department and presented to the Supreme Court. Most were rejected, many of those for the same reason as Mr. Oland, harm to public confidence, the province said.

It said there should be a general presumption that bail will be denied to convicted people, although in certain cases judges could still permit bail. "Canadians expect that a person convicted of a serious crime and sentenced to a lengthy jail term will immediately begin serving that sentence and will remain in jail," the province said in a legal filing.

The Supreme Court had asked whether it should consider the Oland bail case moot, as Mr. Oland has been free since the fall, after the New Brunswick Court of Appeal threw out his conviction and ordered a new trial, saying his original trial had been flawed. But several provincial governments, intervening in the case, said courts were applying the rules for bail pending appeal in an inconsistent fashion. And Mr. Oland wished to stick with the case, because he could face the same issue if convicted a second time.

The right to bail is protected in the Charter of Rights and Freedoms, and is not to be denied without just cause. There are three justifications in the Criminal Code for denying bail: a risk to public safety; a risk the individual will not show up for trial; and harm to the public interest. It was that third ground – harm to public confidence in the justice system – that was at issue before the Supreme Court. A judge from the New Brunswick Court of Appeal had ruled that, because of the brutality and seriousness of his offence, and because Mr. Oland's grounds of appeal were not so strong as to "virtually assure a new trial or acquittal," his release would harm public confidence.

But the Supreme Court said that was too high a standard. In a ruling written by Justice Michael Moldaver, the court's leading voice on criminal law, it said it was enough that an appeal be clearly "not frivolous" – a standard set out by Louise Arbour, then an Ontario appeal court judge, in a 1993 case in which Guy Paul Morin, one of Canada's best-known wrongly convicted people, participated. (Justice Arbour later joined the Supreme Court.)

Justice Moldaver said judges could simply rely on their experience and the court record to do a preliminary assessment of the strength of an appeal, without thinking in terms of categories such as "reasonable prospect of success." He said Justice Arbour's 1993 ruling "reflected society's acknowledgement that our justice system is not infallible." Among the cases he cited was that of Gregory Parsons from Newfoundland and Labrador, who was wrongly convicted of murder in the death of his mother. 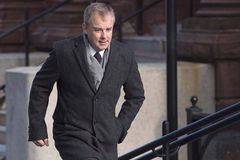 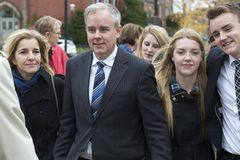 New Brunswick Crown to appeal ruling overturning Dennis Oland’s murder conviction
January 3, 2017
Follow Sean Fine on Twitter @seanfineglobe
Report an error Editorial code of conduct
Due to technical reasons, we have temporarily removed commenting from our articles. We hope to have this fixed soon. Thank you for your patience. If you are looking to give feedback on our new site, please send it along to feedback@globeandmail.com. If you want to write a letter to the editor, please forward to letters@globeandmail.com.
Comments are closed