The federal government's decision to put a cap on how long environmental assessment hearings can drag on isn't expected to affect the Northern Gateway pipeline project, but aboriginal reaction to the change probably will.

The Gateway assessment was always scheduled to be completed within that time frame.

But aboriginal leaders in British Columbia say they are becoming increasingly dismayed with the public hearing process and are now seriously considering bypassing the hearings and heading straight to court.

"My guess is they are now going to try and shut it down by the fall," said Mr. Sterritt, whose organization is an alliance of about a dozen First Nations along B.C.'s north and central coasts and Haida Gwaii.

"We are not now going to try and educate the panel as well as we had hoped we would. We are now going to review our legal options because that's where we are going to end up, no doubt about it. Let's just have at it. There's no sense waiting around."

The three-member panel, which held its first public hearings at Kitamaat Village in January, is assessing the environmental effects of the project and is reviewing the Enbridge Inc. (TSX:ENB) application under both the Canadian Environmental Assessment Act and the National Energy Board Act.

Under the National Energy Board Act, the panel will decide if the project is in the public interest. It will assess its environmental effects under the Canadian Environmental Assessment Act and make recommendations to the Conservative government.

"We're not ramming anything through," Mr. Oliver told The Canadian Press. "We don't want any project to proceed unless it's safe for the environment and safe for Canadians."

He said the Conservatives have not spoken to the panel members about altering the hearing process. But he said he believed they are aware of the government's plans to modernize the regulatory review process, including keeping project reviews to two years.

"We've had no direct communications with them," he said. "I'm assuming they are aware of where we intend to go with this legislation."

The panel estimates hearings — including oral evidence, statements and final arguments from intervenors, government participants and Enbridge — will conclude in April 2013, with the release of the Environmental Assessment Report in the fall of 2013 and the final decision on the project at the end of 2013.

The hearings process began last January and if it wraps on schedule, it will come in just under 24 months. More than 4,300 individuals and groups have registered to speak at the hearings across British Columbia and Alberta.

Enbridge, which filed its application for regulatory approval in 2010, plans to construct an 1,170-kilometre twin pipeline from Bruderheim, Alta., to Kitimat on the northwest B.C. coast. The pipeline will carry Alberta crude oil to the West Coast for export to Asia on board huge tanker ships.

"The new rules, after they get royal assent, will apply to existing projects," said Mr. Oliver, confirming that the 24-month reviews will be applied retroactively to Northern Gateway and other projects currently under environmental review.

"There will be transitional measures to deal with them and that will have to be handled on a case-by-case basis, because some projects started some time ago and others more recently," he said. "We think the timelines we're proposing are reasonable and adequate to do the scientific review and to hear people out, and we'll take those timelines into account when we take a look at how much time has elapsed."

Any future aboriginal court challenge to the Northern Gateway project will involve arguments over the extent and interpretation of the federal government's efforts to consult with aboriginals on the project.

Chief Coun. Marilyn Slett of Bella Bella's Heiltsuk Nation said her community, located about 300 kilometres south of Prince Rupert, prepared for months to address the panel, but lost almost two days of hearings because the three panel members were intimidated by the reception they received at the local airport.

Local school children carrying placards and on a 48-hour hunger strike to protest Northern Gateway were at the airport and along community streets. Aboriginal dancers in traditional regalia were also at the airport.

The RCMP said the protest greeting was peaceful and there were no incident reports.

"To be portrayed in this way has been really insulting to us," Ms. Slett said. "We've been quite offended with their actions. We're a peaceful and respectful people. We're known up and down the coast as a welcoming community."

The NEB, speaking on behalf of panel members Sheila Leggett, Kenneth Bateman and Hans Matthews, said the panel's arrival in Bella Bella on Sunday caused several concerns they believed could result in difficulties at the hearings.

"The hearing on Monday was cancelled because of circumstances the panel experienced on Sunday afternoon. They felt a meaningful hearing could not be achieved until issues were discussed with the community leaders," said the statement.

"The panel needs to be able to receive information from the community in an environment that is safe and secure and where it can be assured that there is a clear understanding of expectations and protocols."

"The courts will tell you immediately, particularly on First Nations rights, if you haven't consulted, the timeline doesn't override the constitutional right," said Mr. Cullen, whose riding includes Bella Bella.

"You can't simply say, 'I'm putting a timeline on your constitutional rights."

But he said government consultations on aboriginal rights issues are more difficult to hold to timelines.

Mr. Hoberg said he was pleasantly surprised the panel decided to cancel the hearing sessions after being confronted "by the magnitude and intensity of community opposition on the Coast."

"I'm gratified to see that they're emotionally affected by this," he said. "They're a group of thoughtful, professional people who have an extremely challenging decision to make." 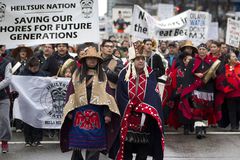 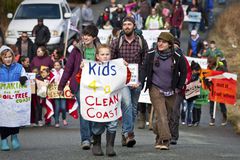 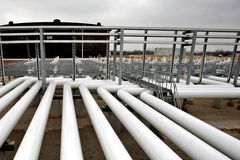