Outside of financial circles, Jim Flaherty is best remembered as a relentless champion of Canadians with disabilities.

The former finance minister, who died Thursday at age 64, created, most notably, the registered disability savings plan, a program designed to meet the needs of people with physical, developmental and psychiatric disabilities, that is unique in the world.

He was also an active supporter of Special Olympics. But, above all, Mr. Flaherty will be remembered as someone who used his political clout and considerable charm to promote the inclusion of people with disabilities in the workplace and in other aspects of everyday life.

"The disability community in Canada has lost a true champion," said Laurie Beachell, co-ordinator of the Council of Canadians With Disabilities. "What we appreciated most was that people with disabilities were a central part of his message and his actions. It was not an add-on or tokenism."

There are 3.8 million Canadians living with a disability, including one of Mr. Flaherty's triplet sons. John has a severe developmental disability, having suffered brain damage when he contracted encephalitis as a baby.

Mr. Flaherty's close relationship with his son informed and inspired his policies and "changed my perception of what really matters in life," he wrote in a 2010 article published by the Canadian Association for Community Living entitled "What Heaven Looks Like." The title quotes John's comment while admiring the Great Barrier Reef from a submersible during a family vacation.

The Flaherty family often spent their holidays in Jamaica, where they worked with children with disabilities, and travelling to Special Olympics events.

Terri Milburn, whose son has autism and went to school with John, was in a Whitby hair salon when she found out about Mr. Flaherty's death.

"I can't even begin to say how important it is to my son and everyone with disabilities," Ms. Milburn said.

Sharon Bollenbach, CEO of Special Olympics Canada, said Mr. Flaherty was one of the group's biggest supporters, both in his role as a politician and as a parent. His son John is a baseball player in the Special Olympics program and his other two sons, Galen and Quinn, are coaches.

In his last budget, Mr. Flaherty included a $10.8-million grant to Special Olympics Canada. Mr. Bollenbach said the initiative was not a gift but an investment that reflected his beliefs.

"Mr. Flaherty believed that sport is for everyone, even those with intellectual disabilities. Special Olympics is a catalyst for social change and promotes a more inclusive society and he believed passionately in that," she said.

He was presented with the idea in 2006 by the Planned Lifetime Advocacy Network, a group of parents who have adult children with severe disabilities, and immediately embraced it.

Mr. Flaherty also initiated a number of other tax changes that benefited people with disabilities, including the Enabling Accessibility Fund, which provided grants to make facilities and technology more accessible, and the working income tax benefit, to bolster the income of working Canadians living in poverty. (Many people with disabilities work part-time or in low-wage jobs.)

Under the RDSP program, money can be set aside for a person with a disability (by family or the person) and investments accrue tax-free; the RDSP is much like an RRSP, except withdrawals can begin at age 45. The parent of a 15-year-old who puts $200 a month into the plan would provide her with an additional $2,500 a month by age 65. Additionally, the rules are such that her other income, such as disability benefits, are not to be clawed back and the result is that a person will not live in poverty.

To date more than 81,000 Canadians have registered for an RDSP, and Ottawa had contributed close to $1-billion.

"There is nothing remotely like this anywhere else in the world," Mr. Styan said. "It's Mr. Flaherty's legacy."

Mr. Flaherty was also immensely proud of the program. Once, when speaking about the RDSP and how it would create financial independence and stability for children after their parents had passed away, Mr. Flaherty wept openly.

With a report from Karen McColl 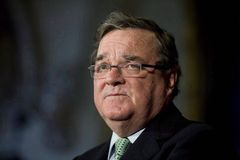 Companies overlook qualified workers with disabilities, government task force says
January 16, 2013
Follow André Picard on Twitter @picardonhealth
Report an error Editorial code of conduct
Due to technical reasons, we have temporarily removed commenting from our articles. We hope to have this fixed soon. Thank you for your patience. If you are looking to give feedback on our new site, please send it along to feedback@globeandmail.com. If you want to write a letter to the editor, please forward to letters@globeandmail.com.
Comments