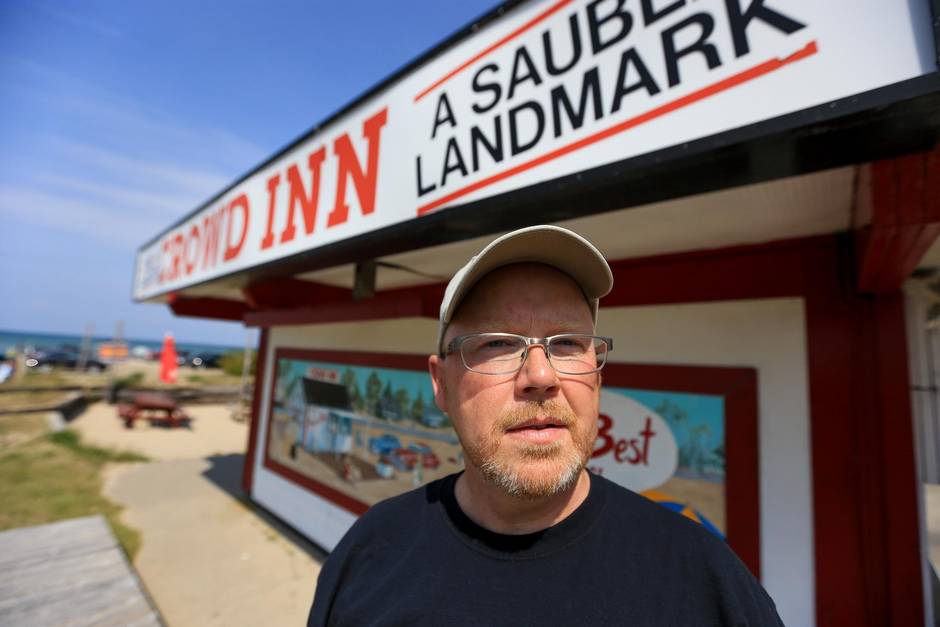 David Dobson operates the Crowd Inn French-fry shack, the only privately owned building on the portion of the beach being claimed by the Saugeen First Nation. (Glenn Lowson/The Globe and Mail)

The Crowd Inn may not look like much: just a little beachfront shack that serves foot-long hot dogs and crispy-yet-still-greasy French fries. But it has been here in the middle of Sauble Beach ever since 1948, when two brothers from nearby Port Elgin, Ross and Harold Dobson, saw an opportunity in the growing number of city folk pulling up to the lengthy, sandy beach in cars and looking to splash in Lake Huron’s waves.

The joint’s current owner, 53-year-old David Dobson, runs the business every summer with his wife, 20-year-old son and 13-year-old daughter helping out. He first became a partner in the business with his father, Ross, back in 1983: “I have been working here since, oh my God, I was doing the garbage pickup when I was 5.”

But how many more summers the Crowd Inn will sit on this particular patch of sand at Sauble is unclear.

Forming the political backdrop to this idyllic summer spot, an 11-kilometre beach about three hours from Toronto, is a divisive conflict – a conflict older than Canada itself. 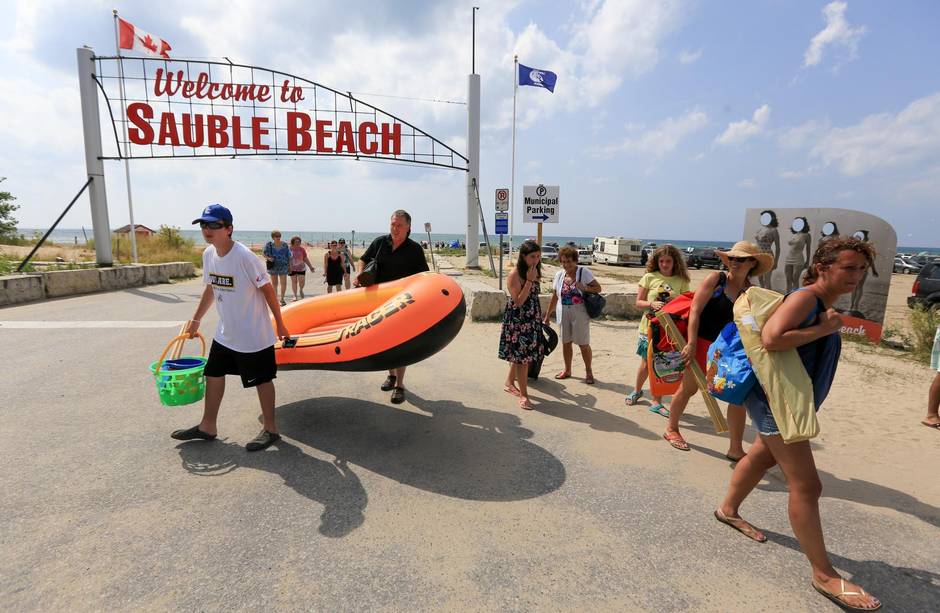 Just a few Frisbee-toss lengths away from the Crowd Inn, past the large, arched “Welcome to Sauble Beach” sign, lies what is known as South Sauble Beach – on the reserve lands of the Saugeen First Nation. And in a land claim that has dragged on for decades, the band insists its actual boundary should be another 2.4 kilometres up the beach, which, besides a handful of private landowners such as Mr. Dobson, is largely owned by the local municipality.

It is just one of more than 300 aboriginal land claims across the country, including many in cottage country. Despite more efforts by Ottawa to settle such disputes through streamlined negotiations rather than court battles, these fights can take years and often leave private land owners in limbo, caught up in a historic battle between governments and First Nations.

At the heart of the fight over Sauble Beach is Treaty No. 72, signed in October, 1854, with a preamble that says the Saugeen confide “in the wisdom and protecting care [of] our Great Mother across the Big Lake,” referring to Queen Victoria. It was a deal made amid increasing pressure from the growing number of white settlers looking for land in the Bruce Peninsula, then known as the Saugeen Peninsula, which had previously been set aside in its entirety for the area’s aboriginal people. The Saugeen agreed to surrender almost all of that land to the Crown, except for several smaller reserves.

In court filings, the Saugeen First Nation, which now counts about 1,800 registered members, argues their ancestors never surrendered this stretch of beach, a key fishing ground they called Chi-Gmiinh, or “sandy shore on water of the large bay.” They say the official 1856 survey of what was then called Amabel Township, conducted by veteran surveyor Charles Rankin – who also mapped Muskoka Township and other parts of Ontario – does not reflect the treaty they signed.

Treaty No. 72 says the reserve’s eastern boundary should be “a line drawn from a spot on the coast at a distance of about nine miles and a half ” from the reserve’s western boundary. The current line at Sauble’s main street, and as depicted on the official Rankin map, is only about eight miles away. So the Saugeen First Nation claims it is owed another 11/2miles of beach.

They also point to other evidence. In one rough 1855 draft map, found in Mr. Rankin’s notes, he placed a post further up the coast, at about the 91/2-mile mark, and labelled it: “NE < Ind. Res.” It is this spot, the Saugeen First Nation argues, that denotes the northeast point of the real boundary.

The federal government agrees and, in an unusual move, is supporting the land claim. 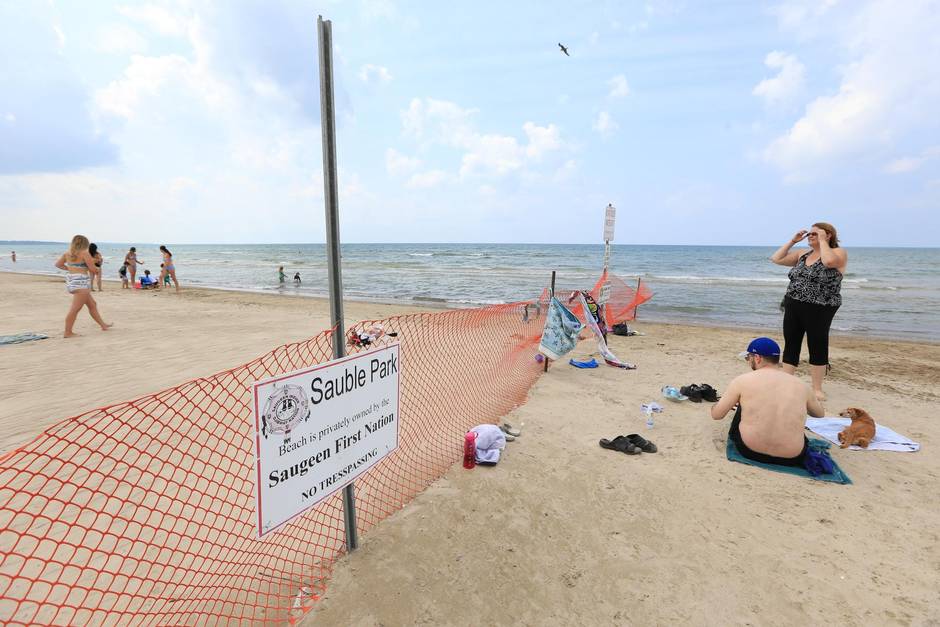 The local town of South Bruce Peninsula, as well as Mr. Dobson and other private landowners and the province, argue the official map signed by Mr. Rankin – who personally attended the signing of the 1854 treaty – is the only map that counts.

There is evidence the Saugeen were complaining about access to their fishing grounds on the beach as early as 1890. But the current court fight dates back to the early 1990s. Since then, it has simmered though various attempts at negotiations. It hit a rolling boil last summer, when a tense public meeting was held to reveal a proposed deal resulting from a mediation overseen by former Supreme Court of Canada justice Ian Binnie.

The proposal, meant to avoid a costly court fight, would have handed formal title for the disputed 2.4 kilometres of beach – from Sauble’s Main Street up to its 6th Street North – to the Saugeen First Nation. But it also would have created a joint management board with three representatives each from the town and the reserve to run the beach and approve any changes. If the deal had been approved by all sides, the town would have received $5-million, the First Nation an undisclosed amount.

The deal was meant to address widespread fears among the many who own family cottages on private land and walking distance from the water. On South Sauble, the reserve charges admission to recoup the costs of maintaining the beach, it says. (Pedestrians are charged $5 a day, cars cost $20 on weekends.) Sauble cottagers feared the Saugeen First Nation would want to raise revenue in the same way on the beach’s northern stretch, which vacationers have always been able to stroll along for free. (The town does charge $12 a day for parking near the beach to help cover the $300,000 it costs to maintain it and keep it clean.) Some feared the band would also start allowing cars to drive up and down the beach, as it now permits on South Sauble. Others raised the spectre of a casino or a large resort complex, plans the band has floated for its other lands.

The idea of handing the beach back without a fight kicked up a political sandstorm last year with a municipal election just a few months away. Justice Frank Newbould, a very senior Ontario Superior Court justice with a cottage at Sauble, wrote a seven-page letter to the town council pointing out flaws in the evidence provided by the federal government and urging the town to reject the deal and fight. (Justice Newbould declined to speak to The Globe for this article.)

The town’s previous mayor, who supported the deal, narrowly lost re-election to current mayor, Janice Jackson, a marketing director for a local retirement community who traces her family roots in Sauble Beach to the mid-1800s. She and her new council have vowed to fight, retaining one of the country’s top litigators, Jonathan Lisus of Toronto firm Lax O’Sullivan Scott Lisus LLP. A trial is not expected until 2018.

Ms. Jackson said the town still hopes to be “great neighbours” with the First Nation, whatever happens, but said the deal floated last year would have left the town little say in the beach’s future: “If you have a dispute, and if it were to go to court, the very first thing any judge is going to say is, ‘Who owns this land?’ you know, and then we’re sunk.” 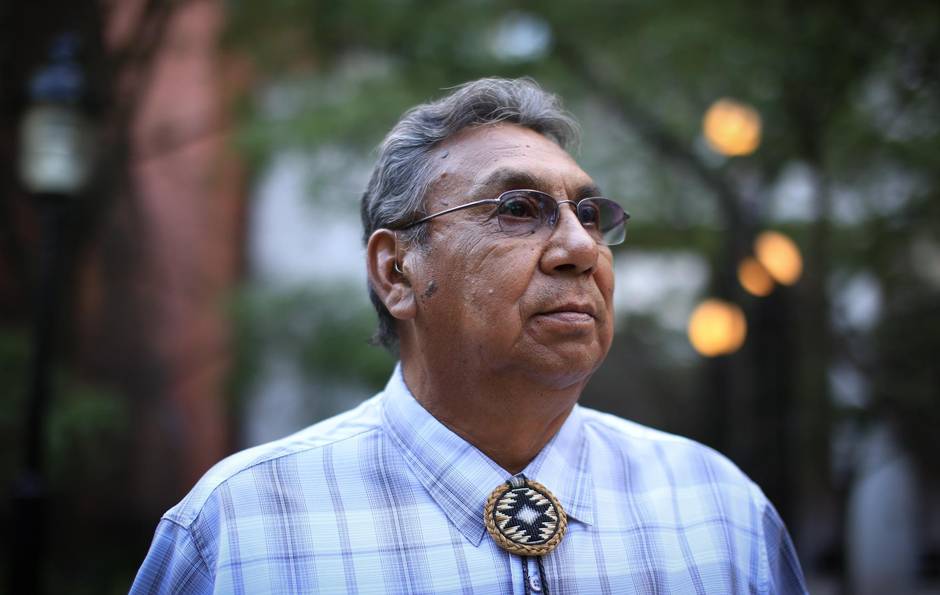 Chief Vernon Roote of the Saugeen First Nation, who first began researching the land claim in 1970, warning that he others on the reserve are losing their patience. (Glenn Lowson/The Globe and Mail)

The rejection of the potential settlement has Chief Vernon Roote of the Saugeen First Nation, who first began researching the land claim in 1970, warning that he others on the reserve are losing their patience.

“We’ve gone so far over the past years to provide a good relationship with people,” he said in an interview. “We offer a beach for entertainment and whatnot. We don’t have to. That’s the whole point, we don’t have to. And what do we get in return? Well, I hate getting a little slap in the mouth once in a while, and this is what I feel like right now.”

If the Saugeen First Nation wins the beach, Chief Roote refused to rule anything out, including charging admission, or development or a casino, but he said he doubted allowing cars to drive on the north stretch would be feasible: “This is our land. And if we need to develop it for our own purpose, for our own revenue, then our people will decide that.”

Before now, tensions between the two communities had calmed since the1990s, when a fishing-rights fight around the Bruce Peninsula saw a native-owned fishing boat destroyed by an unexplained fire in Owen Sound. (In 1999, the Ontario government bought out most of the area’s non-native commercial fishing operations.)

But also complicating matters further is yet another land claim, filed by both the Saugeen First Nation and the nearby Chippewas of Nawash Unceded First Nation. This claim, filed in 1994 and not set for a trial for another three years, demands $90-billion in compensation for the proceeds of sales of Crown land on the Bruce Peninsula the First Nations say they are owed. Treaty No. 72 promised the First Nation “the interest of the principal sum arising out of the sale of our lands” that were handed over to the Crown.

That claim also demands the return of unsold Crown lands, including 20-metre “shore road allowances” left by surveyors around many lakes. The details of this massive claim remain unclear, but it is certainly possible it could again put the ownership of a large portion of Sauble Beach in doubt. 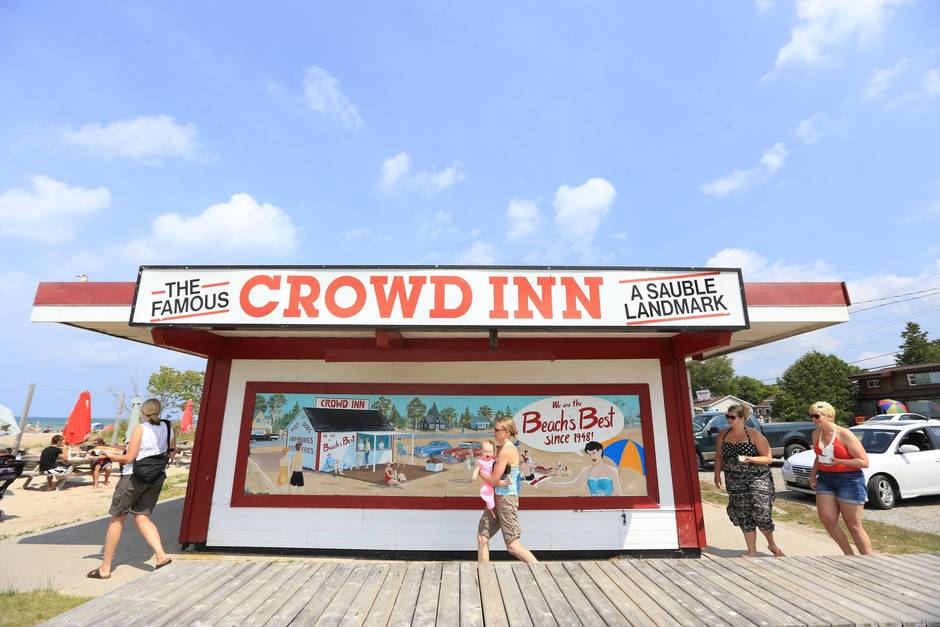 Unaware of the battle for the beach, sun seekers line up at the Crowd Inn, French-fry shack, for lunch on August 19, 2015. (Glenn Lowson/The Globe and Mail)

Meanwhile, the Crowd Inn – the only privately owned structure on the beach – keeps serving up its locally famous French fries, for now.

Mr. Dobson did not participate in the talks that led to last year’s deal. He said he was told after a failed round of talks in 2006 that under that proposed deal he would have been allowed to continue running the Crowd Inn, but that he would no longer own the land and so could not sell it and retire. And he fears he could face the same offer again, despite the fact that in other land claims, private landowners are often compensated.

“You know what really bothers me is people don’t seem to see that there is another wrong being committed here,” said Mr. Dobson, who also stresses that he doesn’t blame the Saugeen First Nation or feel any animosity toward them. “It is the exact same wrong that the natives are complaining about. The exact same thing.”