Ingeborg Marshall still remembers the day, 18 years ago, when she was presented with a single strand of hair clipped from Shanawdithit, the last known member of the Beothuk, the now-vanished Indigenous people of Newfoundland.

The hair had apparently been passed down for generations by the family of a doctor who saw Shanawdithit before she died of tuberculosis in a St. John's hospital in 1829. For Ms. Marshall, an anthropologist and authority on the grim history of the Beothuk, the unusual heirloom sparked an intriguing question: Would it be possible to extract DNA from such a sample and decode the genetic history of Newfoundland's pre-European inhabitants?

Ms. Marshall soon learned that a piece of cut hair without its root would not provide the information she sought. But the long-running scientific quest she embarked on then has now borne surprising fruit.

In a study co-authored by Ms. Marshall and published Thursday in the journal Current Biology, researchers have, for the first time, managed to sequence DNA retrieved from the remains of several Beothuk individuals along with those from an older, prehistoric culture that existed in Newfoundland thousands of years earlier.

The results suggest the two groups are not closely related. In fact, the Beothuk are so genetically unlike the people that preceded them that their last common ancestor probably lived 10,000 years ago, when humans were first spreading across the Americas.

"The island got populated twice – at least – by distinct groups," said Ana Duggan, a postdoctoral researcher at McMaster University in Hamilton, Ont., who performed much of the genetic work.

Dr. Duggan, who happens to be a Newfoundlander, added that the study does not address whether there are any traces of Beothuk ancestry in people living in the province today, as some have maintained. And it only provides information about the maternal line of descent of the two peoples, because the work was done using mitochondrial DNA, which is passed down from mother to offspring.

Despite these caveats, said Hendrik Poinar, principal investigator at the McMaster Ancient DNA Centre and senior scientist on the project, the study hints at a complex story underlying the peopling of Atlantic Canada.

"It means that the dynamics of what was going on back then at the furthest eastern edge of the continent was way more interesting than the typical narrow vision that we have," he said.

Based on archaeological evidence, a group known as the Maritime Archaic people appeared in Labrador about 8,000 years ago, as ice age glaciers were retreating. At some point, they crossed over to the island of Newfoundland where they left a long record of habitation that lasted until about 3,200 years ago. At that point, signs of their presence fade from the archeological record. Researchers speculate that a cooling climate made Newfoundland less hospitable to people who were, by then, adapted to living off marine mammals and other coastal resources.

Over the next 2,000 years or so, the island was frequented by Paleo-Eskimo groups spreading southward from the Arctic. They may have been the "skraelings" described by Norse explorers who tried to settle on the northwestern tip of Newfoundland around 1,000 A.D.

The Beothuk appeared next and they were still there when Europeans began settling in Newfoundland starting in 1630. During the centuries that followed, the Beothuk generally avoided contact with Europeans and lost access to the coastal part of their landscape, a crucial change that is chemically recorded in their remains because it forced them switch to a poorer land-based diet. Clashes with colonists and exposure to Old World diseases effectively brought about their extermination within 200 years.

For the genetic study, scientists were able to obtain mitochondrial DNA from the bones and teeth of 74 individuals, including 19 Beothuk, 53 Maritime Archaic and two Paleo-Eskimo. The team then tried to understand how these populations, separated in time, related to one another. The answer is not at all.

"I didn't expect that," said Vaughan Grimes, an archaeologist at Memorial University and a team member on the study. "I thought there would be more biological relationship between the groups."

In particular, the results show that the Beothuk were neither direct descendants of the Maritime Archaic people nor close relatives who repopulated the island after its first inhabitants disappeared.

That leaves open the question of who the Beothuk were related to, said Dr. Grimes, a question that will likely only be answered with a far more detailed and costly study of chromosomal DNA from the Beothuk and other First Nations groups with living descendants in the region. Such a larger study could have implications for future land claims and for the overall understanding of the island's pre-European history.

Researchers were aware of the sensitivities related to Beothuk identity and to disturbing human remains. Before the sampling began, they sought permission from six First Nations and Inuit communities who currently reside in Newfoundland and Labrador. Last week, Drs. Duggan and Grimes presented their results during a meeting with Indigenous community members held at Memorial University.

"It was a little bit of a shock to find out [the Beothuk] were not related to the Maritime Archaic," Chief Mi'sel Joe of the Miawpukek First Nation. Until now, he said, the conventional view has been that all Indigenous peoples in the region were derived from the same ancestral population.

He said he would welcome further genetic studies to see what connections to the Beothuk might be discovered, including the possibility, based on oral tradition, that some Beothuk fled Newfoundland as their population faced extinction.

Ms. Marshall, now in her 80s, said she is also hoping for more follow-up studies.

"There is a definite sadness among many people in Newfoundland that we have lost our own original native people and that this was largely our own doing," she said. "People now are eager to remember and honour the Beothuk." 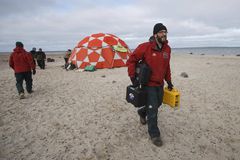 Rescue archaeology project aims to give new insights into Louisbourg’s history
July 30, 2017
Franklin researchers hope to link DNA from sailors’ bones with descendants
May 7, 2017
Follow Ivan Semeniuk on Twitter @ivansemeniuk
Report an error Editorial code of conduct
Due to technical reasons, we have temporarily removed commenting from our articles. We hope to have this fixed soon. Thank you for your patience. If you are looking to give feedback on our new site, please send it along to feedback@globeandmail.com. If you want to write a letter to the editor, please forward to letters@globeandmail.com.
Comments