She knew how to work a room - even one full of nosy newspaper reporters. After ensuring that each visitor to her suite at the Royal York had a chair, the "slim, tall and boyish figure, frocked in a simple brown crepe dress," as The Globe described her the next day, claimed a large cushion and sat on the floor.

The opening questions were predictable. "The tyranny of fame," one journalist observed, "must be very taxing." Another asked: "Are you a good housekeeper?"

She deftly offered the sound bites the press loves. Wearing a hat, she found, prevented her from being recognized on the street. And while she liked a well-run household, she said, "there are things I would rather do than iron ruffles on the curtains."

Then Amelia Earhart, one of the most famous women in the world by December of 1932, was offered a chance to discuss what had brought her back to Toronto, the city that had kindled her passions for aviation and social activism. It was there, while working as a nurse's aide at a military hospital in the last year of the First World War, that she had fallen in love with flying while visiting local air shows and military airfields.

Did she think women made good pilots? Weren't they "more inclined to lose their heads in emergencies?"

"Women have not as much strength as men. But they have more endurance," she said - something she had proved six months before as the first woman to fly solo across the Atlantic Ocean. And any tendency to panic was a matter of nurture, not nature. "Women have been trained and educated to timidity, fear and dependency; to scream at a mouse. Men have been trained in the opposite.

"That," she insisted, "is the only difference."

Earhart conquered the Atlantic, but she is usually remembered for something she failed to do. She was only 40 when she disappeared, along with navigator Fred Noonan, in 1937 over the Pacific as she attempted to become the first woman to fly around the world. Their fate is a mystery that still overshadows Earhart's accomplishments.

The Hollywood biopic Amelia , which opened this weekend (starring Hilary Swank, a dead ringer for the athletic, mop-haired flier, and Richard Gere as her publisher-husband, George Putnam), promises a more complete picture of a trailblazer who used her fame to challenge traditional attitudes toward women and their abilities.

At a time when suffragettes and flappers had only begun to redefine gender roles, Earhart inspired women to believe "there was nothing they could not do," noted Eleanor Roosevelt, the U.S. first lady who blazed trails of her own.

"She truly believed," American scholar Susan Ware adds, "that if women proved themselves competent in aviation, and by extension in all aspects of modern life, prejudices would fade and barriers would fall."

The Kansas-born daughter of a railway lawyer, she arrived in Toronto in late 1917, during her senior year at a Pennsylvania college. It was a Christmas-break visit with her younger sister, Muriel, a student at St. Margaret's College.

The United States had just entered the war and "instead of new uniforms and brass bands," Earhart later wrote, "I saw only the results of a four years' desperate struggle." Canadian soldiers wounded and disfigured at Passchendaele and Vimy Ridge were everywhere, "men without arms and legs, men who were paralyzed and men who were blind."

Determined to help, she dropped out of school and signed on at the Spadina Military Hospital. "I can't bear the thought of going back to school and being so useless," she told her mother.

She worked 10-hour shifts, scrubbing floors, tending to patients and working in the kitchen. She was later assigned to the dispensary because she knew some basic chemistry and, as she put it, "I could be trusted not to drink up the medical supply of whisky." She became a committed pacifist.

Airplanes were everywhere too. She attended an air show at the Canadian National Exhibition and bravely stood her ground when a pilot buzzed the crowd, prompting other spectators to scatter. Military pilots invited the 21-year-old with the sandy hair to visit their aerodromes.

"I hung around in [my]spare time and absorbed all I could," she later noted, never forgetting "the sting of the snow on my face as it was blown back from the propellers when the training planes took off on skis."

She volunteered for extra shifts when the flu pandemic hit in Toronto in 1918 and was there when Armistice was announced in November. "What a day!" she recalled. On the downtown streets, cars and trams were marooned in a sea of people and "supposedly dignified citizens snake-danced and knocked each other's hats off."

Earhart returned to the States and joined her parents in California, where "the interest aroused in me in Toronto led me to all the air circuses in the vicinity." She flew for the first time in 1920 and was hooked. She soon had her licence and her own small plane but no thoughts of making flying a profession.

She was a social worker in Boston in 1928 when she seized an offer to accompany a two-man crew on a transatlantic flight, making her the first woman to complete the perilous trip - and an instant celebrity.

Her second, solo trip in May of 1932 - a tense 20-hour, 40-minute flight through rain and fog from Harbour Grace, Nfld., to Londonderry in Northern Ireland - cemented her pioneering reputation. Earhart's milestone came five years after Charles Lindbergh's historic flight and, coupled with her oft-noted resemblance to the famous flier, led the press to dub her "Lady Lindy."

Earhart's return to Toronto shortly before Christmas in 1932 was part of a round of public appearances celebrating her triumph. She recounted her flight at the University Women's Club, to an audience that no doubt included women wearing stylish, Earhart-inspired "Solo Flite" hats - available downtown at the Simpson's department store for $10.95.

She was the first woman in almost a decade to address the Canadian Club - a venue The Globe described as "accustomed only to masculine oratory, masculine information, or masculine advice"- delivering a lunchtime talk promoting commercial aviation, an industry still in its infancy. She proved to be "a delightful personage of entertaining wit," the newspaper was pleased to report.

It was a measure of her celebrity status that the Toronto Daily Star tapped Gordon Sinclair, its globetrotting correspondent, to interview her in advance of the speeches. The 32-year-old Mr. Sinclair, bestselling author of the newly published memoir Footloose in India , was already the blunt interrogator television viewers would see in action, decades later, on CBC's Front Page Challenge .

Mr. Sinclair, who clearly regarded feminists as hypocrites, asked Earhart why Canada had dozens of laws requiring men to support their wives, "but not one lonesome little law to protect men from women." No argument there - such laws were "archaic and antique," she agreed, and "modern women don't want them." He persisted and was "a bit startled" when Earhart said she was weary of "this first-woman business. It's time biology and sex were squeezed out of accomplishment." Reporters, after all, did not ask Lindbergh if he was a good housekeeper.

Mr. Sinclair's surprise turned to disbelief when she claimed she was "no torch-bearer" for women's rights. "I flew because I wanted to try it," she told him. "I'm not crusading about the country for greater feminine freedom because that's coming without crusading."

Earhart was toying with him, and Mr. Sinclair knew it. "You're saying then that women are, or should be, the equal to men in aviation?" he asked.

"No, not aviation," she replied. "In everything."

Dean Jobb, an associate professor of journalism at the University of King's College in Halifax, has published several books of Canadian history. 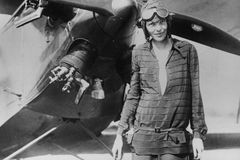