In 2015, as the threat of radicalization became an increasing issue in Edmonton's Somali community, RCMP counterterrorism investigators received a tip about a man in his late 20s who had been "espousing extremist ideology," and launched an investigation that included interviews with the man and others – but which was ultimately closed without further action.

This weekend, that same man emerged as the suspect in a violent rampage that left a police officer and four other people injured in Edmonton, and which investigators believe was an act of terrorism. Police have identified the man as a 30-year-old Somali refugee but did not release his name on Sunday because he had not yet been formally charged.

Police sources have identified him as Abdulahi Hasan Sharif.

"At the end of that exhaustive investigation, there was insufficient evidence to pursue terrorism charges or a peace bond," said RCMP Assistant Commissioner Marlin Degrand, speaking about the 2015 investigation at a news conference in Edmonton on Sunday afternoon. "Further, the suspect was not deemed, at that time, to pose a threat to the security of Canada based on the information that was available to investigators."

He said the suspect showed no active signs of recruitment or radicalization to violence at that time, had no record of criminal interactions with police, and that investigators had no intelligence that warranted keeping him under investigation. Mr. Sharif is now in police custody facing charges including five counts of attempted murder and terrorism offences after a string of violent incidents that sent a police officer and four others to hospital in Edmonton on Saturday night. Opinion: Solidarity is the best response in the face of terror attacks

Police have said evidence from the scenes, including an Islamic State flag found inside the suspect's vehicle, has led them to believe it was a terrorist act.

"From all indications, it appears that this was a single individual acting alone," Edmonton Police Chief Rod Knecht said at the press conference on Sunday, though he cautioned that police are exploring several leads, and that the situation could change. "We are actually less than 24 hours into this investigation. We have no reason to believe that there is any threat to our city, but we encourage citizens to be vigilant and to report any unusual or suspicious activities to our police complaint line."

The incident began around 8:15 p.m. when a white Chevy Malibu plowed through a barricade into a police officer directing traffic near Commonwealth Stadium, where the Winnipeg Blue Bombers were playing the Eskimos.

A surveillance video released by police shows the officer being tossed through the air after being hit by the car, which then rams into a police cruiser. While passersby run to the officer to help, the suspect can be seen getting out of his car and repeatedly stabbing the injured officer lying on the pavement. The officer and attacker can be seen struggling before the attacker flees the scene on foot.

Chief Knecht said the police officer, 48-year-old Constable Mike Chernyk, fought off a knife attack with one hand while holding his gun with the other, and suffered multiple stab wounds to his face and head from a large knife, and significant abrasions to his arms from being struck by the vehicle. Despite the severity of the attack, Chief Knecht said the 11-year member of the force has been released from hospital and is expected to make a full recovery.

Hardeep Singh was working behind the counter inside the store at the corner of 107A Avenue and 92nd Street when he heard a collision out front.

Mr. Singh, who moved to Edmonton from India 41/2 years ago, immediately went outside. By then, he said, the assailant that had struck the police officer with his car was on top of him and attempting to stab him.

"It was scary," Mr. Singh said. "I've never seen any activity ever anything like that."

Mr. Singh retreated to the store with a customer who had just left it.

He locked the door and watched through the front window as Constable Chernyk wrestled with his attacker and eventually overpowered him. The man then fled.

Shortly before midnight, in the midst of a citywide manhunt, a police officer stopped a U-Haul truck being driven by a man whose name appeared to match that of the suspect in the earlier incident.

The U-Haul driver then sped away with several police cruisers in pursuit, at points driving on the wrong side of the road, almost T-boning a vehicle and deliberately swerving into pedestrians in downtown Edmonton, hitting four people.

Chief Knecht only had limited details about the condition of the other victims, but that their injuries range from "broken limbs to brain bleeds." He said one person has been upgraded from critical to stable condition, and another has regained consciousness after suffering a fractured skull. He said two of the victims have been released from hospital.

The chase ended when a tactical police manoeuvre caused the U-Haul to overturn on Edmonton's Jasper Avenue. Tactical-team weapons police deployed a stun grenade and a taser to arrest him. He said the chase was warranted given the grave risk of the situation.

Austin Elgie, manager of The Pint bar just west of the downtown core, said he was outside on Saturday night when he saw a truck zoom by and turn speeding into an an alley where people were smoking. As the van came around the corner, it hit a man who was one of the bar's customers.

The three scenes remained roped off with lines of fluttering police tape on Sunday, as word continue to spread about what happened, and residents grappled with an apparent terrorist attack in their city.

Jim Gee said he was out to dinner when he saw all the police cars speeding toward the stadium, and wondered if there had been a terrorist attack. On Sunday morning, he walked his dog over to one of the scenes to see for himself.

"I am a little leery about jumping to conclusions," he said. "Sometimes, I know things aren't what they appear to be."

"The threat level has been fixed at medium since the fall of 2014. There is nothing known at this moment that would cause that threat level to be changed," he said.

He acknowledged the suspect "apparently had some appearance on a police watch list," but said authorities will continue to investigate and that, "there are no conclusions that can be drawn at this present time."

The investigation is being conducted by both Edmonton police and the RCMP's Integrated National Security Enforcement Team, or INSET, counterterrorism unit, which got involved minutes into the incident.

The Edmonton Police Service also has a specialized counterterrorism unit, which was launched in August of 2016 amid what Chief Knecht described at the time as a marked increase in radicalization in the city.

The simmering risk of dangerous extremism in Alberta has become apparant several times in recent years, including the murder of an Edmonton police officer, Constable Daniel Woodall, in 2015 by a man identified as a Freeman on the Land, which espouses an extreme anti-government and anti-authority ideology. Constable Woodall, 35, was an investigator with the EPS Hate Crimes unit, and had been investigating the suspect for anti-Semitic harassment.

In 2014, members of Edmonton's Somali community spoke publicly about the need to address young Somali men being radicalized in the city.

In other incidents, a 17-year-old from Beaumont, a rural community just outside Edmonton, was charged with attempting to leave Canada to join the Islamic State to commit murder, and three men from the city are reported to have been killed fighting for IS that fall. A young woman who left Canada to fight for IS in 2014 had been recruited through an online course offered by a woman based in Edmonton.

Testifying before the Senate national security committee in 2015, Chief Knecht said counterterrorism efforts were "woefully under-resourced" in Edmonton. He told media around that time that some cases were not being investigated by the RCMP's terrorism unit, which he described as basically operating at full capacity.

In a statement on Sunday morning, Premier Rachel Notley said extremism in all its forms must be condemned and rooted out.

"There is no place for terrorism in Alberta," she said. "And we will do everything possible to stop it in its tracks in our home."

Edmonton Mayor Don Iveson said he believes Edmonton is a safe city, and urged residents not to be intimidated by violence.

He said he reached out to leaders of the Muslim community Sunday morning, who are as "upset and appalled as we are," and urged Edmontonians to attend a vigil to support their fellow citizens regardless of cultural orientation or faith.

"This is something that touches all of us," he said.

Jibril Ibrahim, president of the Somali Canadian Cultural Society of Edmonton, said he was shocked to learn of the attack and stressed that it was the action of an individual, and not reflective of the broader Somali community.

"We want the rest of Canadians to know that this is not related to the community …" he said. "We want to keep it that way because the community is a peaceful part of this fabric of society in Edmonton." 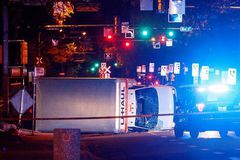 Opinion
Solidarity is the best response in the face of terror attacks
October 1, 2017

Follow Jana G. Pruden and Karen Howlett,  on Twitter @jana_pruden @kahowlett
Report an error Editorial code of conduct
Due to technical reasons, we have temporarily removed commenting from our articles. We hope to have this fixed soon. Thank you for your patience. If you are looking to give feedback on our new site, please send it along to feedback@globeandmail.com. If you want to write a letter to the editor, please forward to letters@globeandmail.com.
Comments are closed