In his 2013 State of the Union address, Barack Obama made a pitch for the United States as a “magnet” for manufacturing, bringing up an Ohio 3-D printing institute “that has the potential to revolutionize the way we make almost everything.”

Watching it at home was Farzad Rayegani, the associate dean of Sheridan College’s School of Mechanical and Electrical Engineering and Technology, who first started working with 3-D printer-style prototyping two and a half decades ago. He turned to his wife: “If that’s what he’s saying, we should do that now.” 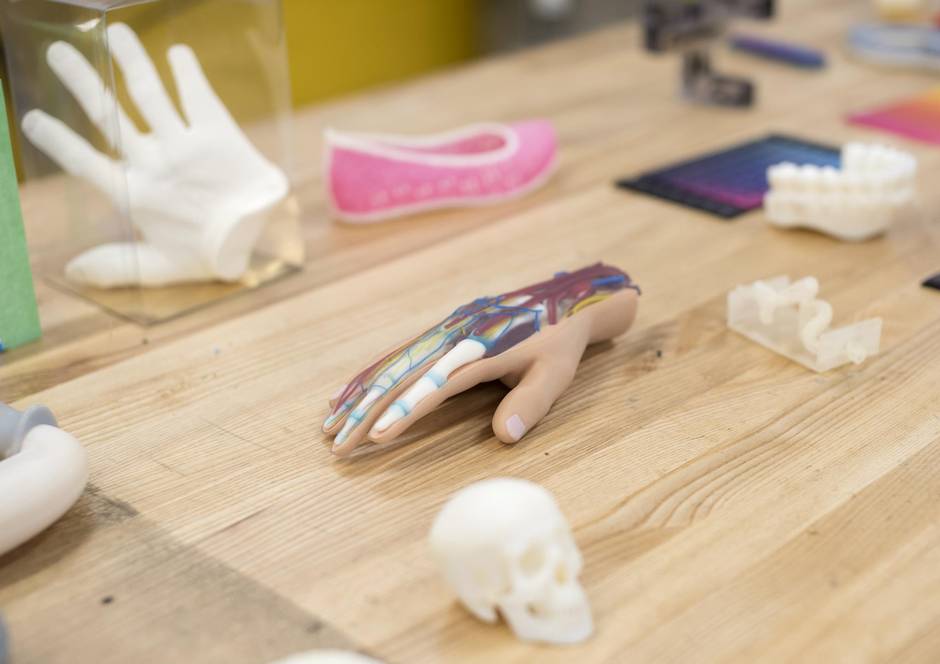 Examples of students’ work in 3-D printing are displayed at the Sheridan College Advanced Manufacturing and Design Technologies centre in Brampton. ( J.P. MOCZULSKI FOR THE GLOBE AND MAIL)

Sheridan had already been investing in 3-D printing technology and training. But later that week, the school issued a press release touting its expertise in the field. Since then, its involvement has only grown: Thanks to internal enthusiasm and external funding, Prof. Rayegani estimates the school has invested more than $4-million into the technology, with hundreds of students using it as part of their broader manufacturing training.

It’s one of many colleges across Canada anticipating the next generation of manufacturing needs and investing millions into 3-D printing equipment and skills training.

“This is about the competitiveness of industry in Ontario and Canada,” Prof. Rayegani says. “If you don’t have the tools in your toolbox, you will be behind.” 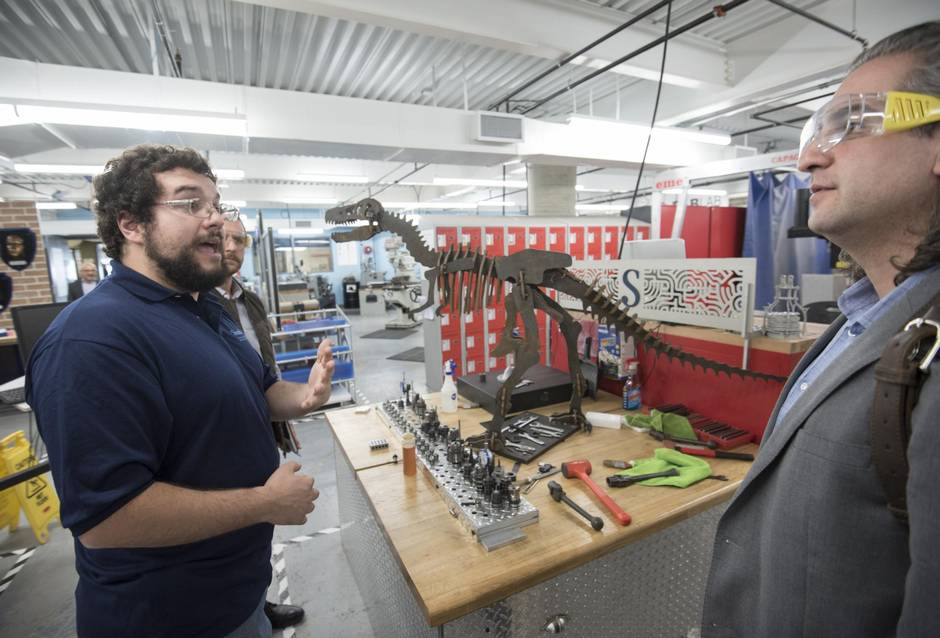 Student Ryan Vieira, left, talks about his work on robotics and 3-D printing at the Sheridan College Advanced Manufacturing and Design Technologies centre in Brampton. (J.P. MOCZULSKI FOR THE GLOBE AND MAIL)

The global 3-D printing industry, sometimes called additive manufacturing, was valued at $5.2-billion (U.S.) in 2015, up 26 per cent from 2014, according to consultants Wohlers Associates Inc. “It’s absolutely critical to pass along – to people of all ages, in the design community particularly – what’s required to design for additive manufacturing,” says that firm’s president, Terry Wohlers, in an interview. “We’ve seen an unprecedented amount of attention in education on all levels.”

At Sheridan, there is no explicit 3-D printing course for applied-science and technology students, Prof. Rayegani says; learning to design for and use the equipment is taught through project-based learning with a number of other tools over the course of their programs.

Students can use these tools, working with a client, an industry partner, on a specific project, says Prof. Rayegani, who is also the director of Sheridan’s Centre for Advanced Manufacturing and Design Technologies in Brampton, Ont. “And by doing that, they go through the whole cycle of engineering design, and development: conceive, design, implement and operate.” 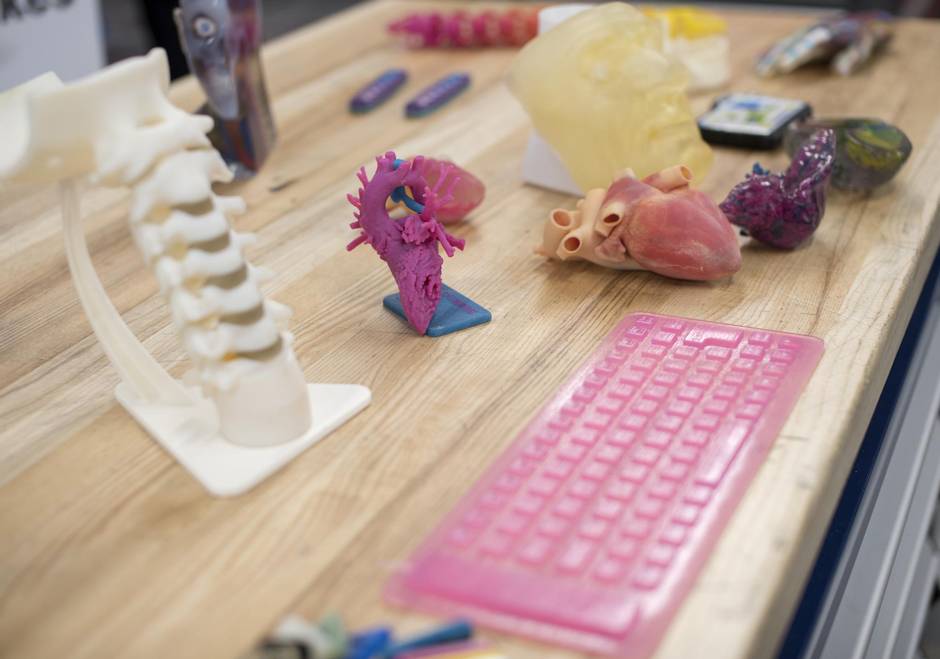 More Examples of students’ work in 3-D printing are displayed at Sheridan College's Advanced Manufacturing and Design Technologies centre in Brampton. (J.P. MOCZULSKI FOR THE GLOBE AND MAIL)

The lab, Prof. Rayegani says, can therefore be “a technological playground for anyone who wants to work with adaptive manufacturing.” He likens it to an immersive clinical program in medical school. That’s an apt metaphor, given that this month the school announced a combined $2-million in funding from industry plus provincial and federal governments for the lab, which will enhance the lab’s equipment for use in biomedical research.

“We are working with surgeons to create 3-D printed models to allow them to practise procedures before performing them on you and me,” Prof. Rayegani says.

Hamilton’s Mohawk College has invested about $5-million in its Additive Manufacturing Resource Centre, says the school’s president, Ron McKerlie. This is with assistance from funding bodies like the Natural Sciences and Engineering Research Council of Canada. A handful of students work and volunteer in the lab, while there are continuing-education and final-year mechanical-engineering courses specifically focusing on additive manufacturing. Students from many disciplines use the lab, though: robotics students prototyping parts, architecture students printing scale models, animation students modelling characters.

The school has an EOS M280 direct metal laser sintering printer on top of its many plastic 3-D printers, which has attracted many people from local industry. More than 400 people have visited the lab this year alone to see what it has to offer, says its manager Simon Coulson. “There is such an interest in this, and people don’t really understand how they can leverage it for their business,” he says. 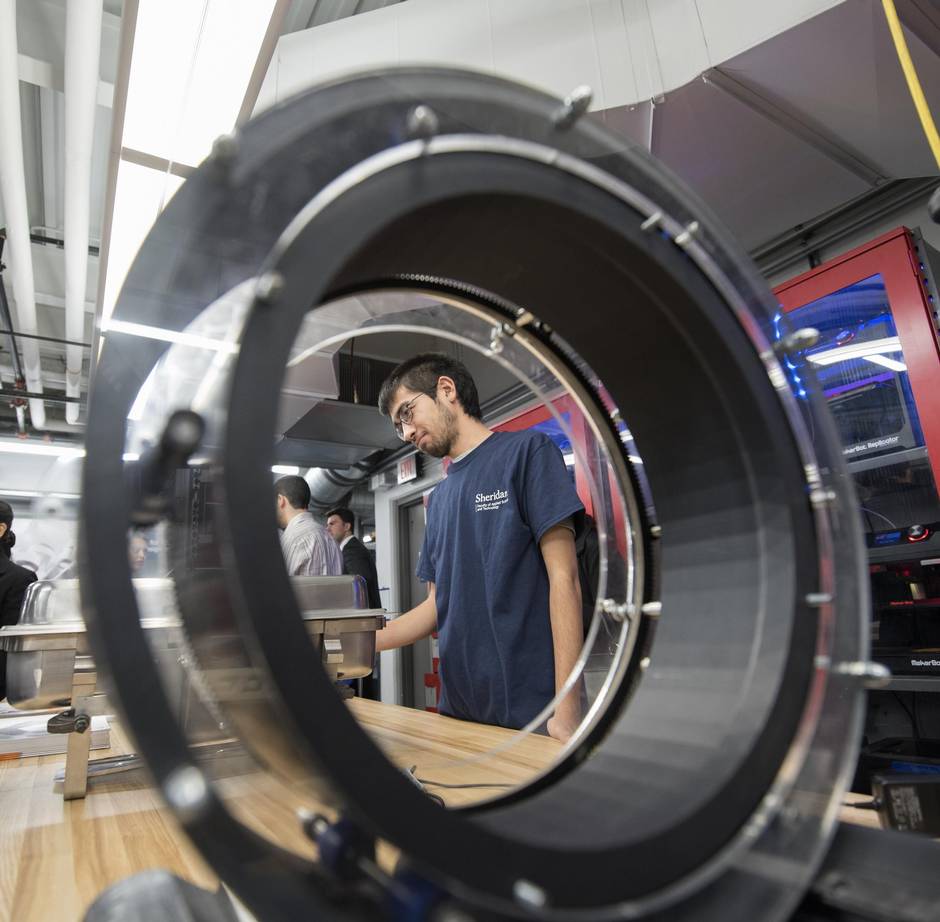 The global 3-D printing industry, sometimes called additive manufacturing, was valued at $5.2-billion (U.S.) in 2015, up 26 per cent from 2014, according to consultants Wohlers Associates Inc. Here, Sheridan students work on robotics and 3-D printing at the college's Advanced Manufacturing and Design Technologies centre in Brampton. (J.P. MOCZULSKI FOR THE GLOBE AND MAIL)

“These are companies that will ultimately hire our graduates,” Mr. McKerlie says. “We want to have a strong relationship with them and introduce them to some of our students here at Mohawk. This technology is going to be the next wave of how manufacturing gets done. We want to have the work force trained here.”

Red Deer College in Alberta has invested more than $1-million in 3-D printing technology – including a Stratasys Fortus 400mc – and integrates its uses in a variety of engineering and creative-arts courses. Where president Joel Ward takes the most pride, though, is how the school connects with the public and local businesses. In one such case, the school helped 3-D print a prototype replacement canine stifle joint – something like a knee replacement for dogs – for Alberta veterinarians Neil Embleton and Veronica Barkowski. The implant, called Simitri Stable in Stride, is now being widely distributed.

“We believe that part of our purpose is to ensure that we are the accelerator for the goal that’s going to be scored – to give an assist – for many of these companies and connecting that to real-world learning for our students,” Mr. Ward says.

At Durham College in Oshawa, Ont., students have access to a number of 3-D printing machines, including a Stratasys Fortus 360mc and smaller FlashForge Dreamers. Engineering technology students use the machines to print and stress-test prototypes for design contests and make parts for capstone projects.

Wide interest and a drop in price for the machines means some Durham students have bought their own machines to start playing with at home. This is a natural evolution in their relationship with the technology, says Durham engineering professor Chris Daniel.

“There was a day not that long ago where maybe one house on the street had a television or computer,” he says. “Now there’s three for each house. I’ve been working on [3-D printing] for 30 years, but no one knew about it in the mainstream.”