A new federal plan to nearly double the number of foreign students in Canada by 2022 is raising concerns about whether universities and colleges can absorb the influx of new bodies without jeopardizing their students' experience.

The federal government's new international education strategy, unveiled Wednesday by International Trade Minister Ed Fast, aims to have 450,000 foreign students studying in Canada by 2022, up from 265,000 in 2012. Universities and colleges have mostly welcomed its ambition, even as critics call the blueprint short on specifics.

But some university leaders are sounding warnings that the plans and promises set out in the strategy may not be robust enough to reach its lofty goals, and that further spending and planning will surely be needed. And while Mr. Fast insists his plan is realistic without taking spaces from Canadian students, some university presidents said that will take delicate planning, particularly at larger urban schools that are already short of space.

Ryerson University in Toronto receives about 70,000 applications for 6,500 first-year spaces, said president Sheldon Levy. He would love to accept more domestic and international students, but "the reality is that we have limited capacity."

"We would have to put together a major plan around this … to ensure that domestic students were not displaced by international students," he said.

The strategy aims to better co-ordinate recruiting efforts and give Canadian students more chances to go abroad, tying Canada's education brand abroad more closely with trade diplomacy to get stakeholders "pulling in the same direction," Mr. Fast said. It tags $5-million a year for marketing, most of it targeting six key markets including China, India and Brazil. And it promises to make it easier for foreign students to arrive, work and stay in Canada, expecting they would bring nearly $8-billion annually in new spending to Canada's economy.

All agree diversifying Canada's student population is desirable. But some critics have panned the document as lightweight and misguided. Higher education consultant Alex Usher called it "little more than a collection of gestures attached to a wish list," while Jim Turk, president of the Canadian Association of University Teachers, called it "strictly a money grab" that ignores what's best for foreign students. "They don't have a clue how we're going to get there," Mr. Turk said.

University leaders have been more gracious, praising the strategy for giving Canada's education sector a national face and encouraging more co-operation in outreach efforts. But they also said it will need fleshing out. "I'm hopeful that this strategy sort of represents a first set of steps and isn't the end of the process," said Stephen Toope, president of the University of British Columbia.

Mr. Toope lauded the plan, but said universities will have to spend heavily on supports and space for the next quarter-million foreign students. "We cannot simply bring in a bunch of people and throw them in without support mechanisms," he said.

With government grants to schools stalling across Canada, "let's be frank, [that investment] will come from international students themselves" through the higher tuition they pay, Dr. Toope added, but "we can't let the provinces off the hook entirely."

Brad Duguid, Ontario's Minister of Training, Colleges and Universities, said his province "will do our very best to make sure that the capacity's there," having already added 161,000 new spaces for students from Canada and abroad in the last decade. And he insisted he would "never allow" domestic students to be displaced.

Other pockets of the country have room to spare, such as some Atlantic provinces and Northern Ontario. Mount Allison University president Robert Campbell said he is "just delighted that this has become part of the federal agenda" at a time when New Brunswick is facing demographic decline. But the promised explosion of international arrivals "will likely bunch in certain areas," he said.

"There's a good chance this is not going to be overpopulating our language departments, and it will probably put great strain on professional programs," he said. "So I think there's a qualitative issue there as well." 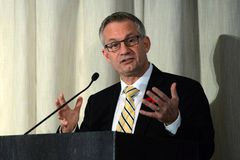 Opinion
Ottawa’s foreign-student plan not worthy of a grade
January 16, 2014 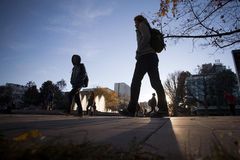