Canada should launch an ambitious new program to send college and university students abroad in an effort to prepare tomorrow's work force to drive trade and economic relations with emerging markets, a new report says.

The report released on Wednesday was co-authored by one of Prime Minister Justin Trudeau's former advisers and the former president of Canada's primary international development agency. It recommends the federal government spend $75-million a year for the program's first five years to help tens of thousands of students study and work abroad as part of their undergraduate education.

Rather than focus on typical U.S. and Western European destinations, students should be encouraged to study at institutions in emerging economies, a move that will help diversity Canada's global trade links, the report says.

"If you look at the trends in Canada's trade relationships and trends within the global economy, it's quite likely that we are going to be dealing with a shifting set of trade partners in the coming years; we already are," said Roland Paris, one of the report's co-authors and university research chair in international security and governance at the University of Ottawa. "This is a long-term investment in the ability of our country to be engaging with those societies, and not just economically, but in other areas as well," he said.

Dr. Paris wrote the report with Margaret Biggs, a former president of the Canadian International Development Agency who is now a fellow in public policy at Queen's University. Dr. Paris was a key adviser in Mr. Trudeau's election team and throughout the government's early months in power and drafted the Liberal foreign policy strategy leading up to the 2015 election.

Canada will succeed on the world stage by "building bridges" through engagement with international organizations, Dr. Paris has said.

This is not the first report to argue that Canada must redress its lagging investment in outbound student mobility. Such proposals have come annually for the past several years from a variety of educational groups and federally-appointed task forces.

But the authors of the new 40-page report hope to restart a stalled discussion by trumpeting the benefits of study-abroad programs for an audience outside the postsecondary sector. The report's recommendations have been crafted with the help of corporate leaders, and it emphasizes the benefits of foreign education to the country's economy.

It also stresses that studying abroad must be accessible to students of all means and backgrounds, a message likely to resonate with a government that has made it clear that its financial contribution to postsecondary institutions, such as research grants, depends on the schools' commitment to equity and diversity. "We are hoping that this will ignite interest not just in the usual circles, but in the private sector," Ms. Biggs said.

To kick start the discussion, the report, titled Global Education For Canadians, recruited representatives from Manulife, Royal Bank of Canada and Power Corporation, among others, along with college and university leaders.

But the report highlights how global education can help even small and medium-sized firms, said Sue Paish, a member of the report study group and chief executive of LifeLabs, a health-care company.

"I think we are at the early stage of Canadian business learning that finding the people who can comfortably and effectively navigate the ambiguity in the business world … can be accelerated by hiring people who have had an international study experience," Ms. Paish said.

In spite of the national and individual benefits, convincing students to go abroad has been difficult for many countries that are part of the Organization for Economic Co-operation and Development. High-quality education systems in their own countries and concerns about costs abroad keep more than 95 per cent of students in Britain, Australia and the U.S. at home. Less than 3 per cent of Canadian postsecondary students currently study abroad for any length of time, according to statistics from the Canadian Bureau for International Education.

But unlike those other English-speaking countries, Canada lacks a national strategy to raise its number, the report points out.

"Our peer countries have already recognized that international learning provides important strategic advantages to their young people and to their societies. We need to have that conversation in Canada; it has barely even begun," Dr. Paris said.

There is one advantage of Canada's lack of attention to outward mobility so far. Any future program will learn from the mistakes other countries have made and ensure that studying abroad does not become another advantage for privileged students.

Both Australia and Britain have increased supports to underrepresented students after studies found far less participation in studying abroad.

"The gap between the rich and the poor is only going to get wider if it's only the affluent students who can make those connections and develop those skills," Dr. Biggs said. 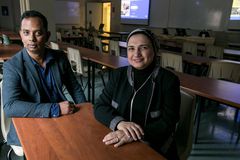 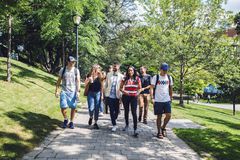