This year's surge in the number of Americans applying to Canadian universities is not a clear sign that today's students are dodging Donald Trump the way their grandparents dodged Vietnam, university admission experts say.

At many Canadian universities, applications from U.S. students for the 2017-18 academic year are up between 20 per cent and 80 per cent compared to last year, an informal survey conducted by The Globe and Mail shows. Even smaller schools such as Trent University in Peterborough, Ont., say they have seen applications from the United States increase by more than 60 per cent.

The interest comes after several years of renewed recruiting efforts in the United States. While the results of the U.S election may have stoked this year's numbers, those recruitment campaigns combined with the drop in the Canadian dollar are likely to have played a large role, universities say.

Read more: Free university tuition with a side of salary, please

"The students are pretty focused on what is best for their careers; they are always thinking about what comes next," said Ted Sargent, vice-president, international, at the University of Toronto where applications from the United States are up 80 per cent.

Experts on college admission in the United States agreed.

"A lot of people are saying they will go to Canada but when it comes down to it, American campuses are pretty liberal and people feel they can express themselves here," said Dean P. Skarlis, the president and founder of the College Advisor of New York, a college-admission counselling firm.

Canadian schools are not unique in seeing increases in interest, Dr. Skarlis pointed out. Applications to American colleges are up over all. Prestigious universities such as Yale, Columbia, Cornell and Princeton saw increases of between 9 per cent and 18 per cent.

Increasingly, students in the United States are also applying earlier, hoping to improve their chances of getting into their first-choice universities. For example, Harvard's average acceptance rate is 5 per cent but rises to 14 per cent for those students who apply by November, said Mimi Doe, the president and co-founder of Top Tier Admissions, a college admission counselling company.

"They take the academic kids, the recruited kids, the athletes, the superstar kids," Ms. Doe said.

Most Canadian schools do not have a formal early admission process, but many said they begin to send out admission offers in December.

High application numbers don't automatically translate into more students enrolling, Dr. Skarlis cautioned. In fact, universities in the United States have invested heavily in a variety of strategies – including data-analytics programs – to ensure that they offer admission only to students who are likely to accept. Otherwise, institutions waste time and money pursuing students who have already committed to going elsewhere.

But while Canadian schools are increasingly recruiting globally, they do not appear to be as far along in developing enrolment strategies. As a result, it won't be clear until the spring whether this year's surge brings more Americans to our campuses.

U.S. schools "have access to a whole range of data sources," said Carolyn Russell, the director of student recruitment and global engagement at the University of Victoria which has seen an increase of 60 per cent in applications from American students compared to last year.

UVic offers campus visits during American holidays and has a team of recruiters who meet with students in California, Washington state and Oregon. But she says the landscape for recruitment has become far more competitive.

Still, Canada's reputation as diverse, accepting and egalitarian appears to be a draw for students this year, she said.

"We've had questions about what kind of programming we have for LGBTQ students," Dr. Russell said. "We've had interest from Latino students." 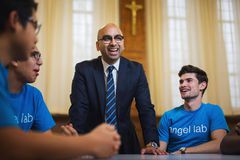