The good news is that Canada is home to so many great universities that it’s difficult to make a poor decision. That’s why choosing the school that best suits you requires going beyond rankings and reputation, and considering the unique culture and educational environment of your potential alma mater. Here are the top schools in the prairies: 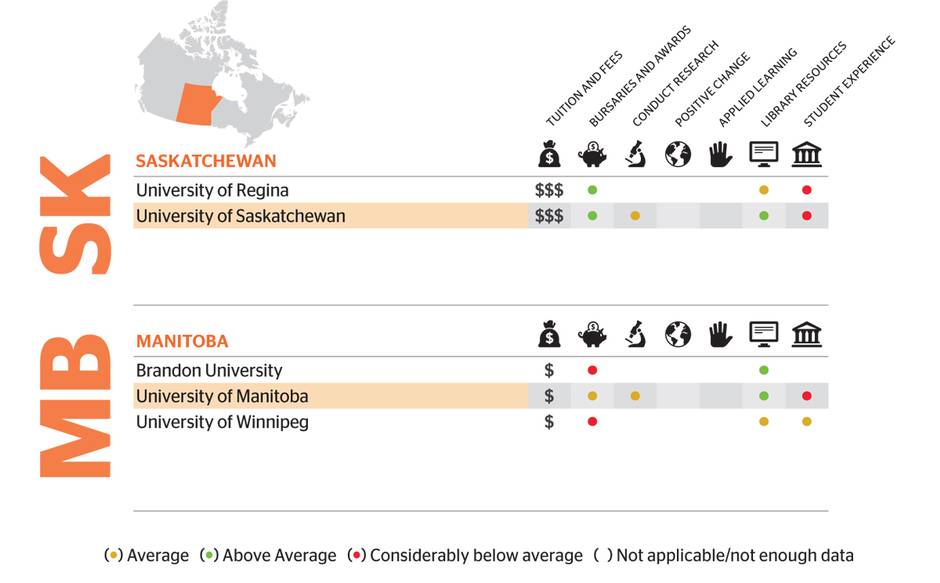 Students ranked U of R as average in a 2014 national student survey, which is a big improvement compared to previous years. Academic advisers at U of R got a high grade – a reflection of the school’s stated dedication to preparing students for the work force. The university puts its money where its mouth is with its UR Guarantee Program. Students sign up at no cost and gain access to mentors, workshops and ongoing support throughout their education. Those who go through the program and don’t find work within six months of graduating are offered an additional year of undergraduate studies at no cost.

In the community: The Community Research Unit brings student researchers together with community groups for collaboration and research on social issues that impact local residents. A recent project, The Cost of Healthy Eating in Regina, looked at why people use the Regina Food Bank.

Located on the banks of the South Saskatchewan River, the University of Saskatchewan campus features plenty of stone and brick buildings amid ample green space. Recent controversies aside (the school is still dealing with the blowback after firing its president last year), the U of S is committed to community engagement and provides students with plenty of opportunities for hands-on learning in the city. Forty per cent of students reported participating in a work experience program in a 2014 survey. The university’s medical program, which was recently recognized for its work providing health care to children living in northern Canada, was put on probation in 2013 but was taken off probation earlier this month.

In the community: The school’s law program works closely with a local legal clinic (Community Legal Assistance Services for Saskatoon Inner City Inc.). Students get to take on actual case files, under close mentorship and supervision, while learning about social justice issues in their community.

Students say: Faculty could pay more attention to their needs. Students ranked their professors and their overall experience low compared to other Western Canadian universities on a national student engagement survey. At the same time, they ranked interactions with other students as quite high, suggesting a strong sense of community on campus.

Students praise the affordability and accessibility of Brandon University, which has an open admissions policy. Forty per cent of students are the first in their family to attend postsecondary school. While most students say they chose Brandon because it was close to home and affordable, many say they would choose it again if they were to start over, thanks to the small class sizes and strong sense of community. This year, Brandon saw major gains in its graduation rate, which jumped to 61.7 per cent from 55 per cent.

Out of the classroom: Brandon currently does not offer any co-op learning programs but aims to have one up and running within two years. Still, many students say they get a hands-on learning experience at Brandon. “I gained life skills and experience that I do not feel I could have achieved elsewhere. You can dream, and the support from faculty and administration is priceless,” says fourth-year sociology student Krystal Kayne.

Students say: Campus facilities are in need of an upgrade and sometimes feel cramped. And class offerings are scarce. “When I first began attending, the campus felt prestigious (at least in comparison to my high school). Over time, however, I realized how small Brandon University actually was. Eventually, I couldn’t help but feel as though I were attending a ‘budget’ university,” says fifth-year business administration student Nathan Berry.

More first-year students (84 per cent) return for their second year of studies than other universities, and the school’s graduation rate is the highest of any university in the Prairies. U of M is a large research-focused university and is known for its medical and dentistry schools. Competition for admission to professional programs, such as pharmacy and respiratory therapy, is fierce. Unlike its rival University of Winnipeg, the U of M campus is not located anywhere near downtown but is in a suburban setting.

This year: Major changes to the medical school will cut the proportion of out-of-province students from 10 per cent of all admitted students to 5 per cent. The reforms will also introduce an entrance stream for traditionally underrepresented students, such as ethnic minorities, single parents, aboriginal students and students from low-income families.

In the community: U of M offers students food and transportation in return for spending their Reading Week giving back to the community and learning about social issues in Winnipeg. During past Alternative Reading Weeks, students sorted food for hungry families and worked with the city’s aboriginal youth.

UWinnipeg’s admissions policy reflects a commitment to providing education to learners from a variety of backgrounds. The student body reflects the demographics of the region: 10 per cent of students are aboriginal. While there are plenty of volunteer and community engagement programs at the school, the co-op program is tiny, even for a small university. The urban campus offers plenty of activity for restless students, and Winnipeg is known for its arts, culture and food scenes.

Student star: Second-year urban and inner-city studies student Kevin Settee received a scholarship and was recognized by the mayor of Winnipeg for his work bringing awareness to the issue of missing and murdered or sexually exploited aboriginal women. He also works with the Aboriginal Men’s AntiViolence Campaign.

In the community: Judith Harris, professor of urban and inner-city studies, is currently working with the Canadian Inside-Out Prison Exchange Program, which puts students in classes with women incarcerated in the Headingley Women’s Correctional Centre. Classes are held in the jail. “We create a very sacred space inside the prison, where people feel they can talk about things they may be hesitant to talk about,” says Dr. Harris.

Editor's note: The University of Saskatchewan's medical program was taken off probation in October, 2015. The print version of this piece went to press before that occurred. This is the correct version of the article.

Which university is right for you?