For more than 100 years, the Rhodes scholarship to Oxford University has been one of the most prestigious academic awards in the world, but it has been open only to students from the Commonwealth, the United States and Germany. Now, thanks to a $120-million donation from a Canadian businessman, the Rhodes scholarship could soon expand to students from China, Russia, Brazil and elsewhere.

The donation, to be announced on Thursday at Oxford, is from John McCall MacBain, a Rhodes scholar from Niagara Falls, Ont., and former owner of Trader Classified Media, which included Auto Trader among its many titles. The gift is the largest in the history of the Rhodes Trust, a charity that manages the scholarship, and part of it will go toward expanding the award.

"We are looking at potentially, in the future, in the next five to 10 years, expansion into China, expansion into Brazil and expansion into some of the other countries," said Mr. McCall MacBain, who is also one of the charity's trustees. "China, Brazil and Russia would be three key countries we'd like to expand it into."

The Rhodes Scholarship was established in 1902 by British businessman Cecil Rhodes, who made his fortune in the diamond business in South Africa. Mr. Rhodes founded diamond giant De Beers, served briefly in South African politics, and administered a nearby territory that was later named after him, Rhodesia, now called Zimbabwe. A strong advocate of the British Empire, he created the Oxford scholarship to help students from Britain and its colonies who demonstrated accomplishments in academics, athletics and leadership. The United States and Germany were included because Mr. Rhodes believed they were the keys to lasting world peace.

Mr. Rhodes left about £3.3 million, worth about £290 million today or $480-million. For more than a century, money from the initial endowment and its investments were enough to finance the scholarship, which now consists of 83 students annually from 14 countries. It funds all expenses for two years of study at Oxford, plus a stipend.

Mr. McCall MacBain said that because of the soaring cost of education and dwindling investment returns, the trust began seeking donations in 2010 to bolster the endowment. It has launched a campaign to raise £110 million, or $181-million. Part of that will go toward increasing the number of scholarships.

"Cecil Rhodes, if you look back, he created this great scholarship and it's still alive and well today accepting the best scholars," he said. "The only thing it is limited on, it is limited in territory and I think that's one of the things we'd want to look to expand if we can afford to do that." Mr. McCall MacBain added that including more countries would raise issues of qualifications and standards that the trust would have to address.

Mr. McCall MacBain spent two years at Oxford in the early 1980s as a Rhodes scholar, studying law and playing on the university's hockey team. "Oxford is a place, especially studying law, where you learn how to think. It is a very principled education. The Rhodes scholarship also got me to meet other future potential leaders from other countries."

He went on to become the King of Classifieds, snapping up buy-and-sell magazines around the world and accumulating a personal net worth of more than $1-billion. He sold the business in 2006 and put nearly all of his assets into a private foundation that he manages with his wife, Marcy, who is in a PhD program at Oxford studying medicine. Through the McCall MacBain Foundation, the couple have awarded grants to universities, hospitals and environmental causes globally.

The gift to Oxford won praise from British Prime Minister David Cameron, a graduate of the university, who called it "great news for the U.K. and our world-class higher-education system that such a prestigious program looks set to be secured for the long term."

Canadian Prime Minister Stephen Harper added: "More than 1,000 students from Canada alone have benefited from Rhodes scholarships over the decades. It is truly heartening to know that thousands more from around the globe will enjoy the same opportunity thanks to the vision and benevolence of the McCall MacBain Foundation."

Opinion
A university education is more valuable than any 'outcome'
May 11, 2018

Universities and colleges need to specialize
May 11, 2018 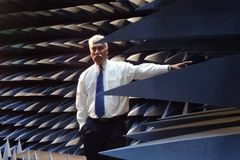