Nowhere in the country is competition for students more fierce than in Ontario, where four distinct publicly funded systems – francophone public, francophone Catholic, English Catholic and English public – are present in nearly every corner of the province. English public schools are at a disadvantage this year: They are the only ones whose teachers are protesting government-imposed contracts by stopping extracurricular activities, leaving those schools without sports teams and clubs.

Kindergarten registration begins this week and high schools have been hosting open houses in recent weeks, bringing the competition to boost enrolment numbers to a feverish pitch. Catholic and francophone boards, in particular, have been emphasizing after-school programming that their counterparts have lost.

For the first time, an advertisement placed for potential high school recruits in a local newspaper by the Huron-Perth Catholic District School Board in Southwestern Ontario highlights "a diverse program of co-curricular activities" with late buses running throughout the counties. School boards contacted by The Globe and Mail would not openly admit to competing with their neighbours, despite the flood of radio, print and billboard advertising that has popped up around the province – much of it emphasizing extracurriculars.

The local newspaper ads by the Huron-Perth Catholic board raised eyebrows at the neighbouring public school board. But Martha Dutrizac, the Catholic's board director of education, played down the role of the labour dispute in the board's advertising strategy.

"It's a very different climate out there … there's no hidden secret about it," Ms. Dutrizac said. "It's more about retaining and keeping our families and our students connected, such that the choice becomes obvious, they want to continue their Catholic education."

Speaking anonymously, another Southwestern Ontario board official said the teachers' labour dispute has had a huge impact on student recruitment. "The competition is really, really fierce this year," the official said.

His board sent a teacher, acting as a mole, to sit in on an open house at a competing Catholic high school. The teacher reported back that the focus of the evening's presentation was the clubs, sports teams and other after-school activities that the separate school offered and that its public neighbour was forced to cancel.

Abigail Dancey, a spokeswoman at the Waterloo Region District School Board, said the board ramped up its kindergarten registration program this year, with three big open houses for parents and their children. Ms. Dancey minimized the impact of the labour strife on their strategy.

"No doubt when people enter our system in kindergarten, we find that they tend to stay. There is the element of promoting our board," Ms. Dancey said. "People have choice, and we want them to choose our board."

Schools have been competing for students for years as birth rates decline. The ongoing dispute between teachers and the Ontario government, over a controversial piece of legislation that dictated the terms of education-sector contracts, has heightened recruitment efforts by creating a new distinction between Ontario's four types of school boards – those that have extracurriculars and those that don't.

Elementary students must meet certain denominational and language requirements to enroll in Catholic or francophone grade schools. At the secondary level, however, enrolment is more porous, and provided there is room, Catholic and francophone high schools are more open to students of different backgrounds.

Wynne says school boards will be welcome at the bargaining tables
February 1, 2013 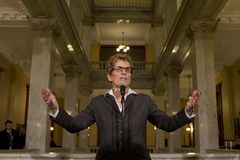 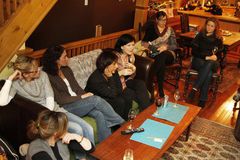