The quality of undergraduate education at Canada's universities is eroding, even as the price of earning a degree rises steadily, leaving students more anxious about their prospects after graduating.

University leaders in all corners of the country are acknowledging that 15 years spent expanding enrolments and campuses while focusing on high-level research has left them unable to give many undergraduates the experience they expect.

The collective acceptance has renewed universities' determination to revitalize the way undergraduates learn at institutions large and small.

"I do think this is a remarkable moment – a high degree of consensus among Canada's universities about the need to focus on best practices in undergraduate experience," said Paul Davidson, president of the Association of Universities and Colleges of Canada.

"Universities can be quite competitive with one another, and what we've tried to do is spark a discussion and get people thinking about what more they could be doing," Mr. Davidson said.

The movement coalesced at a workshop in the spring organized by the AUCC at which Mount Allison University president Robert Campbell declared that he and his colleagues know "that this experience can and should be better."

A report released on Wednesday by the AUCC highlights the concerns from the workshop, which attracted dozens of other university presidents, vice-presidents and provosts. It summarizes options for improvement, including eight case studies on progressive approaches to undergraduate teaching already in use.

"If there is a sort of crisis in higher education," said McMaster University president Patrick Deane, it is rooted in the diminishing capacity of universities to provide two things: meaningful contact with accessible professors, and varied types of learning such as co-operative and field opportunities, problem-based assignments, and chances to do undergraduate research or self-assigned study.

Over the past two decades, tuition fees have risen by two and a half times just to keep pace with costs. Schools have boosted enrolment faster than they hired new faculty, and the ratio of students to professors has swelled to 23-1 from 17-1, intensifying competition for jobs that require a bachelor's degree.

"If we stick with the old ways of doing things as resources decline, we'll be caught in a kind of an elegiac downward spiral, lamenting what's lost," Dr. Deane said.

In 2009, McMaster launched Honours Integrated Science – iSci for short – a program stream that combines six disciplines in one degree. Students spend less time in lectures and more in research-focused modules, teaching seminars, field trips, labs and scientific literacy sessions. The program was the drawing card for Julianne Bagg, now in her third year.

"From the beginning, it opens your eyes to how connected everything actually is [across scientific disciplines]" Ms. Bagg said. "I have friends who aren't in iSci, and comparing the way they interact with professors and the way we are able to interact with ours, it's amazing."

For a decade, Simon Fraser University has offered the Undergraduate Semester in Dialogue, a stream for upper-year students that is not attached to a department, has no lectures, and assigns no grades until the end of term. Students tackle one theme through frequent discussions, group and independent projects, and writing assignments intended to lead them to "catalytic moments," program creator Mark Winston said.

Such initiatives often require small-group settings, which are costly to run, especially for larger universities. But as governments have turned their attention from higher education's accessibility to its quality, many schools may soon offer more of what Mr. Davidson calls "blended learning," a mix of experiences across small, large and even online classes.

"The [current]system of higher education that we have to offer them, though still strong, is somewhat in danger of not really answering students' needs," Dr. Deane said. 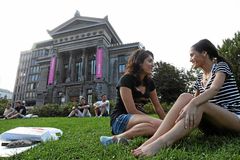