Ontario's striking public high school teachers are being squeezed by the provincial government and school boards as they enter their most crucial week yet, awaiting a ruling as to whether their strikes have put students in jeopardy and a precedent-setting judgment determining if their job action is illegal.

A decision from the Ontario Labour Relations Board (ORLB) that the strikes in Durham, Peel and Sudbury are unlawful would force the 4,5000 teachers back to work immediately. The ruling could come as early as Wednesday.

At the same time, the Wynne government has asked the Education Relations Commission, a rarely-used independent body, to determine if the strikes have put high school students' ability to complete their courses in jeopardy. A finding of jeopardy, which could come later this week, gives the government the option to seriously consider legislating teachers back to work.

Meanwhile, high school teachers in Ottawa-Carleton and Halton will begin withdrawing some of their services as part of job action Thursday.

Amid all of this, however, there is a hopeful sign - teachers and the province are back at the central bargaining table Wednesday with a new mediator.

"I think it's a critical week," says OSSTF president Paul Elliott, adding that he's not sure how these tactics by government and the school boards,"helps us get to a collective agreement."

All sides have said they want a negotiated settlement - but there are 70,000 high school students out of their classrooms and for students in Durham, the strike is now in its fifth week. Students in Sudbury and Peel have been off for a shorter amount of time.

"There are two pieces of pressure [on the teachers]," says Michael Barrett, head of the Ontario Public School Boards' Association. "One is the labour board hearing … and the [other is] potential for jeopardy. We're certainly using all available avenues in order to be able to make sure our children get back in the classroom."

Mr. Barrrett is also chairman of the Durham District School Board and last week, he and his counterparts at Peel and Sudbury asked the labour board to declare the strikes unlawful. They argued the teachers walked out on issues that are not up for discussion at the local bargaining tables.

This is the first time the province, school boards and teachers' unions have negotiated under new legislation passed last year. It divides the process into a parallel set of talks. Issues such as day-today working conditions are considered local and are negotiated between the teachers' local bargaining units and the school boards. The other issues, such as wages and class size, are negotiated at the so-called central table, which is where the province sits.

The ruling by the labour board will be precedent setting given this is the first use of the legislation. It has come under fire from many sides - and not just from the school boards.

"Clearly, if we cannot have local strikes and this legislation says we can have local strikes, I'm not sure now who is going to determine when do you cross the threshold that 'yah you can have a strike over that?'" says the OSSTF's Mr. Elliott. "Who's going to make that determination now?"

He is confident, however, that the labour board will not rule the strike is illegal.

And then last Friday, Education Minister Liz Sandals asked the ERC to rule on the jeopardy issue, arguing that parents "want to see their children thrive, and students want to know they can complete their school year."

Mr. Barrett is also the father of a Grade 12 student - "Even my son, who is doing a doctorate in X-Box in the basement, is actually getting concerned," he said, noting that his son is now worried that he's missed so much chemistry and biology that it will affect his first year of college.

Despite this, he still believes the best route is to negotiate. "A jeopardy ruling in itself is not the worst thing," he says, "it's the potential of legislation back to work, which is difficult." He says the last time the ERC made a jeopardy ruling was nearly 20 years ago in a strike that lasted 44 days.

For his part, OSSTF's Mr. Elliott is suspicious of the government's tactic to go to the ERC - "If this is a political cover to bring in back-to-work legislation, it's a very thin cover," he says.

Ontario seeking advice on whether teachers' strikes could jeopardize school year
May 15, 2015 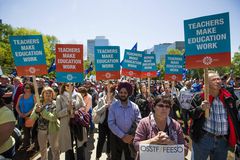 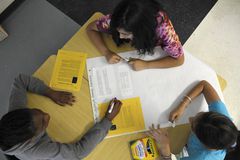