School boards are not responding quickly enough to replace a common but dangerous type of glass, industry experts say, warning that wired glass can lead to serious injuries.

The concerns come as the federal government is poised to revise wired safety glass standards, last updated in 1990. Wired glass – , which is regular glass with a layer of meshed wire embedded inside – is commonly used in doors and fire separations in schools and most other public buildings as it is fire resistant and, in some cases, required by building codes.

But engineering and glass experts say despite its ability to withstand heat, wired glass is weaker on impact than regular glass and shouldn't be used in high-traffic areas because safer fire-resistant alternatives are available.

The government's review of the standards takes place as Sean Lloyd, a former Burlington high-school student, is suing the Halton Catholic District School Board for $5-million after he pushed through a wired glass panel while attempting to open a door last year and sliced open a large chunk of his arm.

"I felt like I was going to faint because I lost a lot of blood," said Mr. Lloyd, 18 at the time of the incident at Assumption Catholic Secondary School. "It was pretty scarring."

He said he still has problems using his right arm and can't lift weights with it.

Mr. Lloyd's lawyer, Michael Smitiuch, said since media reports of the case came out, he's heard from nearly a dozen other individuals who say they suffered similar injuries from wired glass in schools.

"It's just not the case when someone says that there aren't any other options. There are," Mr. Smitiuch said. "Either school boards just don't want to spend the money or for some other reason … they're jeopardizing student safety."

The board wouldn't comment on Mr. Lloyd's lawsuit, but said it was aware a new standard for wired glass is coming. "We look forward to reviewing the draft document when it becomes available," spokeswoman Lisa Stocco said.

Wired glass was developed to contain fires but still allow people to look through doors, said University of Toronto engineering professor Zhirui Wang. Unlike regular glass, which shatters in heat, wired glass is held together by the mesh.

"Many people thought since there are steel wires or iron wires embedded in glass, it would be much stronger. That is a wrong impression," Dr. Wang said. The wire and glass expand and contract at different rates under a change in temperature, leaving potential gaps, or "micro-cracks," when the glass is processed.

"After that, any small force on the glass will create a huge stress or force at the crack tip," Dr. Wang said.

Schools should lead the charge to replace or strengthen their wired glass to keep students safe, said Rob Botman, general manager of Glassopolis, which for years has sold alternatives such as ceramic glass or wired glass reinforced with a heat-resistant plastic film. The Ontario School Boards' Insurance Exchange, which insures school boards, advises on its website, "Wired glass can cause horrible injuries." Between 1987 to 2000, 107 claims against Ontario schools for glass injuries added up to more than $3-million.

"It's like walking around seeing knives sticking out of the wall," said Mr. Botman, who recently launched Canadians for Safe Glass, an initiative to raise awareness about the potential dangers of wired glass.

Mr. Botman volunteered to sit on the Canadian General Standards Board committee revising standards for three different types of glass, beginning with wired glass. The Public Works and Government Services department is only now revisiting the standard "to respond to needs identified by manufacturers, glass users and regulators such as Health Canada and the National Research Council," spokeswoman Annie Joannette said in an e-mail.

A draft of the new standard will be ready for public review late this year, she said. It will be completed in 2015.

In the United States, a series of building code changes starting in 2003 banned using wired glass in "hazardous" locations, such as doors, unless it was reinforced with a heat-resistance film. Mr. Botman said Canada's new standard will likely take a similar approach and require a sticker on any plastic film to prove it's heat-resistant.

"If the schools themselves do not get off their arses and make some of these changes, they may be forced into it," Mr. Botman said.

At least one Ontario school board, the Toronto District School Board, is in the early stages of exploring different options for doors and windows where building and fire codes don't require the use of wired glass.

No cost estimates exist yet as the plans are too preliminary. Mr. Botman said wired glass costs about half the price of ceramic glass, but a film reinforcement is a cheaper alternative.

"As somebody who walks my kids to school every day and I see this stuff everywhere, it just drives me up the wall that all these Canadian kids are getting injured," he said. "The Americans are smart enough to do something about it but we still have not." 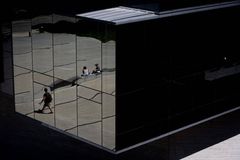 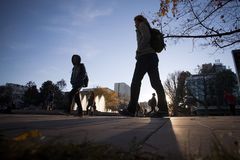 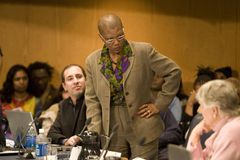