The university student who arrived at Romina Mizrahi's office was frightened. His thoughts were off kilter; he believed his roommate might be tampering with his food.

The student's paranoia alarmed Dr. Mizrahi, a research scientist and psychiatrist at the Centre for Addiction and Mental Health in Toronto. For years, she'd been studying young people at risk of developing schizophrenia. Now, a 20-year-old student was sitting in front of her, aware that his irrational thoughts weren't normal, but unsure of what they meant.

Dr. Mizrahi asked the student to join her study. He agreed, but the next day, the young man called again, this time convinced that his roommate was trying to poison him. Dr. Mizrahi's heart sank. That he was certain that his irrational fears were true was a signal that the disease had struck.

It was too late to chart the chemical changes that occurred in his brain as the disease descended. Dr. Mizrahi missed that window, but she hopes one day to unravel the mystery of what causes schizophrenia and prevent in others what happened to the young university student.

Among scientific peers, Dr. Mizrahi's research has been described as "cutting edge" in an institution that's at the forefront of mental illness research in Canada and the world.

Currently 12 patients who've shown early symptoms of the mental illness are enrolled in her study. She's comparing their brain scans with 12 healthy volunteers. At times, the Argentine-born scientist feels she's in a race with time. About 35 per cent of people with high-risk symptoms will go on to develop schizophrenia.

Outside the lab, the demands on Dr. Mizrahi are no less daunting. She and her husband, who moved to Canada from Argentina a decade ago, have two little girls, age 3 and nine months. Some days, she's operating on three hours of sleep.

Juggling multiple roles as a scientist, clinician, mother, wife and professor has been gruelling, and at times, "overwhelming."

In an interview at her College Street lab in Toronto, Dr. Mizrahi talked about the strains of combining high-stakes research with family life. It requires "obsessive planning," seven-day work weeks, and lots of help from her husband, a physicist at CAMH who took parental leave.

At work, she makes a point of showing colleagues and superiors that her children are a big part of her life. They visit her lab and travel with her to international conferences.

For all that, Dr. Mizrahi, 40, comes off as good humouredand energetic, laughing as she recounted – in rapid-fire accented English – the logistics of bringing little kids to international academic settings.

"It can be done," she said. "So you just be a mother and a scientist. And if people around you don't like it, it's their problem."

But she's also aware that many talented female academics avoid research careers or drop out mid-career when the dual workload becomes too much. Experts who have examined the role of women in scientific research have described the dilemma as the "leaky pipeline" syndrome.

Over the past four decades, the number of women undergraduate and graduate students has increased dramatically. It was thought those women, as they moved through the pipeline, would move into higher academic positions. That didn't happen.

By 2008-09, women held just more than a third of all faculty positions in Canadian universities, according to an expert panel asked by Ottawa to study the issue. Of those, only 22 per cent were full professors, said the report, released last fall by the Council of Canadian Academies.

Many women researchers, including Dr. Mizrahi, say the launch of a scientific career – when a scientist is scrambling to secure salary-producing grants – coincides with the period of time when many women want to start families.

One of the report's authors, Michael Wolfson, a former assistant chief statistician with Statistics Canada, said researchers who take time off risk being left in the dust.

"I published," said Mr. Wolfson, who holds a Canada Research Chair at the University of Ottawa. "I felt it myself. If you stop, and come back, the goal posts have all shifted."

That need to stay ahead in her field drove Dr. Mizrahi back to the lab two months after her youngest daughter was born last spring.

Dr. Mizrahi is the only scientist in Canada looking to prevent schizophrenia through neuro-chemical research. Using Positron Emission Tomography (PET scans), which provides a three-dimensional look at the human body, Dr. Mizrahi is studying the brains of a dozen young people, aged 18-35, who are at risk of developing schizophrenia.

Some, like the university student, have delusional thoughts. Others hear voices or are sensitive to light and sound. Some have relatives with schizophrenia and want to know if they, too, will develop it.

One big breakthrough, published last year, showed that young people with a high risk of developing schizophrenia release large amounts of dopamine in their brains when under stress. The normal brain doesn't react this way, Dr. Mizrahi said. If researchers could find out what triggers the dopamine surge in the first place, they could look for ways to prevent it.

But there's a human element that adds to the pressure to find new treatments, she said. The brain scans she studies for hours in her lab belong to real people with troubling symptoms who are looking to her for answers.

"I remember everyone of them. They're young. They're unsure. They want help."

No points for a baby

Romina Mizrahi cited three factors that dissuade many women from pursuing research careers: Timing, the nature of academic evaluation, and, eventually, burnout if a scientist is a parent too.

"Lots of women start out strong, but they don't last," Dr. Mizrahi said. The barriers are first revealed at the launch of a research career.

By the time academics finish postgraduate work, many are in their mid-thirties, when, for women, the window for starting a family begins to close. It's the exact period when budding scientists apply for new investigator grants to fund their research. After that, the manner in which their work is evaluated doesn't factor in time needed for parenting.

"Our work is measured in points," she said. "Points for a paper, points for a grant. How many points do you give for having a baby?"

Lorna Marsden, president emeritus of York University and the chair of the Council of Canadian Academies expert panel, said women scientists shouldn't be given the task of solving this dilemma.

"My response is: 'It's not your obligation,'" Ms. Marsden said in an interview. "It's the obligation of large organizations … to think about how you can get there. Not: 'You have to fix it.'"

Finally, Dr. Mizrahi cited sheer fatigue. "Obviously, my performance is worse when I'm having a baby. If you sleep five hours, my mind is not the same.

"This is why, despite the fact you see many women at the beginning of their scientific career, you see very few at the end. And that's because they can't keep it up." 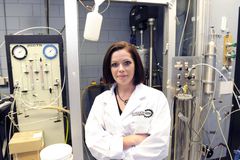