McGill University will intensify its efforts to keep Indigenous and lower-income high-school and university students in science and math classes after a national accreditation body said the university's medical school is falling short of its diversity goals.

"We have a new structure in place, we are doing consultations to better understand the needs of our community," said David Eidelman, the dean of medicine at McGill University. "When we talk to Indigenous communities in our area they tell us that their big struggle is to keep students engaged all the way through high school so they can go on to have the prerequisites to get into med school, or any other of the health professions."

Last week, the school was taken off probation by the Committee on Accreditation of Canadian Medical Schools (CACMS). It had been on probation since June, 2015, after CACMS and the Liaison Committee on Medical Education – the equivalent American accreditation body – found issues in 24 areas, including overwork and inadequate supervision of medical residents.

McGill has since implemented changes, including anonymous reporting of overwork or harassment, a workload policy that specifies a maximum number of student placement hours and a new curriculum that links medical practice to health policy and community needs.

"We have counsellors that are specifically for medical students, a place to go for their mental health. That has been a significant change," said Xin Mei Liu, the executive president of the Medical Students' Society of McGill University.

The current review found only two areas – the supervision of medical students doing clinical placements and diversity – were still unsatisfactory. In fact, fewer students in the Surgery stream were satisfied with their supervision and responsibility levels in 2017 than in 2015.

McGill must submit progress reports in these areas within three years.

The school has hired a co-ordinator for its diversity efforts and is reaching out to Indigenous students in high school or even earlier to help them maintain their interest in science, Dr. Eidelman said.

This past spring, the Association of Faculties of Medicine of Canada urged all medical schools to help advance Indigenous health, including through specific admission policies that recruit aboriginal students.

But each school decides what its specific diversity targets will be and how it will achieve them, said Danielle Blouin, the secretary of CACMS and a professor of medicine at Queen's University. It can be difficult to see fast change on diversity measures, she added, but it's not enough to voice goals.

A review of the University of Calgary's medicine school in 2016 also found unsatisfactory progress toward a more diverse community.

"The schools have to state how they define diversity, the outcome measures they will be monitoring," Dr. Blouin said.

Among the student body at McGill, diversity is still lacking, the report also found. Low-income, rural and black and Filipino students are underrepresented compared with Montreal census data.

Medical students are trying to change that, speaking to high-school students in underprivileged areas of Montreal and Quebec, for example.

"We raise awareness that they have the potential to go to McGill Medicine, or McGill Nursing," Ms. Liu said.

McGill's medical school is the last to have its accreditation fully vetted by both the Canadian and American accreditation groups. Two years ago, the process was partly separated, with a new element of "social accountability" introduced in Canada, which includes measuring a school's student and faculty diversity. The University of Calgary and the University of British Columbia were accredited through the process.

All medical schools in North America are reaccredited every eight years. Dalhousie University will see its medical school receive an accreditation decision this fall. 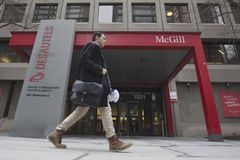