Children attending Ontario's full-day kindergarten are outperforming their half-day peers at the end of Grade 2, according to a new study that upends older research that found the Liberal government's signature education program made little difference for pupils.

A team of researchers from the Ontario Institute for Studies in Education (OISE) at the University of Toronto are tracking almost 600 children through the primary grades and have found that full-day kindergarten (FDK) learners are "significantly ahead" in reading, writing and number knowledge. What's more striking, said Janette Pelletier, a professor at OISE and the lead researcher, is that children enrolled in the all-day learning program showed significant gains in self regulation, which includes the ability to focus, follow instructions and co-operate with peers.

Prof. Pelletier's findings three years prior with a smaller sample of children in the primary grades found no significant difference between children who attended full-day kindergarten and those in the half-day program when it came to alphabet knowledge, counting and number tasks and writing a sentence. But she said it would be naive to expect a new approach to learning to work smoothly during early implementation. Teachers and education workers were tasked with implementing a curriculum that was based on play and less direct instruction. "In the first few years, obviously that's going to be harder. But I think in my later cohort of kids, they [the educators] pretty much got that down," she said.

"I'm a researcher … I'm here to report what the facts are, what I found. I feel that I can say with confidence after this last set of analysis with all of the children that it really appears the full-day kindergarten program is having long-term benefits – at least till the end of Grade 2," Prof. Pelletier said.

Ontario's program has had its struggles. When it was first rolled out, critics characterized the program as an expensive form of government-subsidized daycare. Parents and educators complained that overcrowded classrooms, some crammed with as many as 40 students, would impede learning.

The province's Liberal government has capped kindergarten classrooms at 30 pupils this coming fall.

Researchers have mixed views on universal full-day early learning programs. Some argue that money would be better focused on at-risk children.

But Prof. Pelletier said targeted programs miss many children from middle-class families who also need help. "If you target programs to certain demographics, you may miss many children who are in need, and that is the argument for universal," she said.

"FDK is not an inoculation which guarantees literacy and numeracy success forever, that simply does not exist," he said. "However, by providing young children with the literacy and numeracy skills and knowledge to be successful learners, we are providing a strong foundation on which to build more advanced learning and skills throughout elementary, junior high school, and senior high school."

In Prof. da Costa's province, the Alberta government does not fund full-day kindergarten. But many school districts offer it to their pupils, directing funds from elsewhere in their budgets.

He said that he has grown tired of trying to persuade governments to fund full-day kindergarten, especially for children in needier communities. "I hope, even more, that governments stop just asking for more research as a tactic for stalling the provision of FDK funding for our children," he said.

Nova Scotia's Education Minister Zach Churchill said his province will roll out a preprimary program for four-year-olds this fall. The province is following Ontario's lead in offering a play-based curriculum in classrooms or childcare spaces.

Mr. Churchill said the research is conclusive that early learning programs are tied to academic and social success.

"This is a program that will basically jump-start their learning abilities and will also helpful for their family budgets," he said. 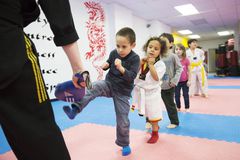 Toronto parents upset with delays for free preschool speech-therapy program
February 17, 2017
Toronto parents’ fight against high-rise near elementary school isn’t over
May 28, 2017
Follow Caroline Alphonso on Twitter @calphonso
Report an error Editorial code of conduct
Due to technical reasons, we have temporarily removed commenting from our articles. We hope to have this fixed soon. Thank you for your patience. If you are looking to give feedback on our new site, please send it along to feedback@globeandmail.com. If you want to write a letter to the editor, please forward to letters@globeandmail.com.
Comments